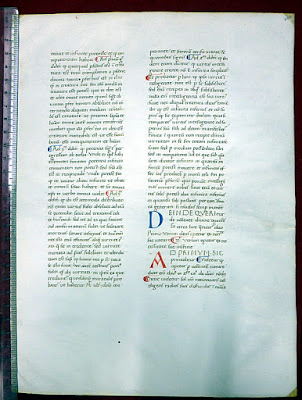 One of the most easily recognisable manuscripts dispersed by Otto Ege was a copy of Thomas Aquinas's Commentary on Peter Lombard's Sentences, Book I. Typical leaves look like the one above.

In 2013, when Scott Gwara published his monograph on Otto Ege's Manuscripts, no provenance was known for the manuscript earlier than "around 1942", when Philip Duschnes was selling leaves in his Catalogue 54. We can confidently take it back a little earlier, to Duschnes's Catalogue 48 in 1941:

Duschnes is likely to have acquired (or at least broken) the book after the publication of his Catalogue 42: Pages from Medieval Manuscripts [undated, but probably 1939/40] from which it is absent. He was still offering leaves in his Catalogues 68 and 74.

When thirty-two leaves from the book were sold (as part of a large group of ex-Ege manuscripts, lots 39-92) at Sotheby's, 26 November 1985, lot 80, they were accompanied by a clipping ‘from an American bookseller’s catalogue’, in which the manuscript was described as still intact, and having 309 leaves, on the first of which were the unidentified arms of the first owner: azure, 3 crescents or, between a chevron of the same.

The author, text, and number of leaves allows us to locate the manuscript using the Schoenberg database, in an entry created before 2009, but with recent updates by Laura Cleaver and Federico Bottano of the CULTIVATE MSS project.

I contacted Federico, who kindly sent me his images of the relevant catalogue:

in which the manuscript is no. 3:

The dimensions, number of leaves, etc., all match, and there is a plate, so we can confirm that the arms on the first page of de Marinis's manuscript are the same as those in the ex-Ege manuscript, as described in the 1985 Sotheby's catalogue: 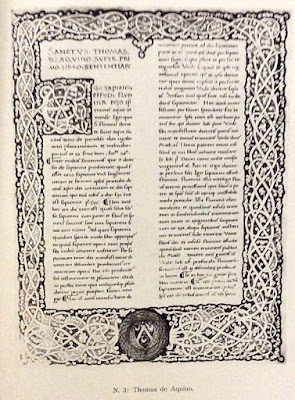 As well as being a bookseller, Tammaro de Marinis (1878-1969) was a significant scholar of Italian manuscripts and their bindings; he has been describe as "without question the most influential Italian book scholar, binding historian, collector, benefactor of libraries, and bookseller of the 20th century." Among his still-indispensable publications is the four-volume La biblioteca napoletana dei re d'Aragona (Milan, 1947-1952), so we should take seriously his opinion that the manuscript was "exécuté probablement à Naples".

It is not yet known how the manuscript got from Florence in 1908 to Philip Duschnes by 1941. It is usually assumed that Ege broke the manuscript, as most of the known leaves passed through his hands, and the residue of 32 leaves was with his heirs until 1985. But as the earliest known owner of single leaves was Duschnes, not Ege, it is perhaps more likely that the former broke the book, selected some of the most saleable leaves, and then sold the remainder to Ege. This was perhaps a common pattern for their working relationship; cf. the Beauvais Missal here.

In a series of three blogposts [parts I, II, and III] Milly Budney records that the manuscript was offered for sale in 1925 and 1926 by Davis & Orioli. She includes her photographs of the opening leaf, with the arms and full border, and another leaf, which are both now at the Beinecke Library: 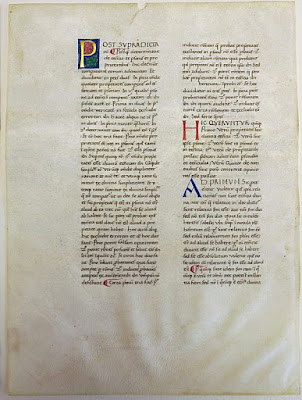 Despite what I wrote above about taking de Marinis's opinion seriously, these do not look Neapolitan to me; I thought that both the script and illumination look Florentine, and was therefore pleased when Laura Nuvoloni, who knows infinitely more than me about Humanistic manuscripts, concurred. Here are details of the above images: 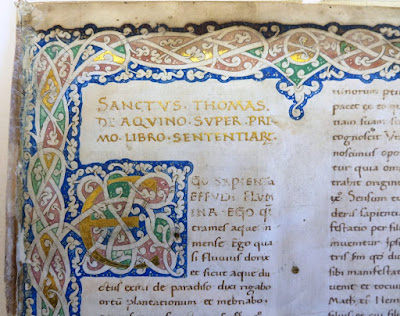 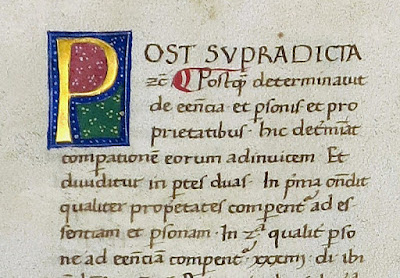 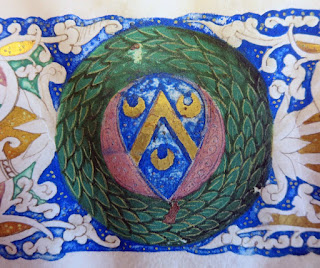 Laura also pointed me to one possible identification of the arms shown in the detail above: the Lorenzi family of Florence, but unfortunately this cannot be verified because the tinctures are not recorded. Thanks to her pointing me to the correct heraldic terminology in Italian, however, I found two other Tuscan families (but Sienese, not Florentine) who bore exactly the right arms: "d'azzurro, allo scaglione d'oro accompagnato da tre crescenti montanti dello stesso, 2.1". They are the Vannicini Pillotti and the Bonfigli. A rendering of this blazon from about a century later, dated 1562, can be seen on this piece of majolica:

So, in summary, the provenance is