Sotheby's currently have an online sale including more than thirty single leaves from Otto Ege manuscripts, including a leaf from his well-known 12th-century Italian Gospel Lectionary, shown above. I helped to catalogue the sale, giving me a reason to reconsider the parent manuscript, which I have not really thought about since a blogpost in 2016.

The main purpose of my 2016 post was to share a 1937 description of the manuscript before it was was disbound and dispersed, but I did not pursue this to its logical conclusion, to see how much we could deduce about its provenance and contents from the old description and available images.

The 1937 description provides some liturgical clues:

Of the six saints singled out for mention here, feasts for St Benedict are common and widespread, but I think that a few of the others are noteworthy:
S. Sabinus (Jan. 17th)
There were many saints named Sabinus, but the only one to have a major feast on 17 January was the second bishop of Piacenza, who died in the early 5th century, and whose main feast in the Roman martyrology was on 11 December, but the translation of his relics to the church of San Savino, Piacenza, was celebrated on 17 January.
S. Antoninus martyr
There were a number of martyrs named Antoninus, but in view of the presence of St Sabinus, I think that this is probably the St Antoninus who was patron of Piacenza, and whose relics were said to have been discovered by Sabinus and placed in the church of Sant'Antonino, Piacenza. I cannot know for sure, but I suspect that the feast noticed in the 1937 description might be the Finding of the Relics, celebrated on 13 November, or the more widespread main feast on 30 September. A leaf of the manuscript at Boston Public Library has a feast of a St Anononinus immediately before the 10 July Octave of Sts Peter & Paul, and is therefore presumably the feast celebrated in Piacenza on 4 July: 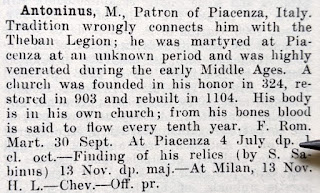 S. Archelaeus
Archelaeus is much more uncommon name, so even though we are not told the date of his feast-day, the list of options is much shorter. If we eliminate the most unlikely candidates, such as the bishop of Kaskar in Mesopotamia, and the patron of Arborea on the west coast of Sardinia, we are left with a martyr whose relics were at the cathedral of Cremona, not far from Piacenza: 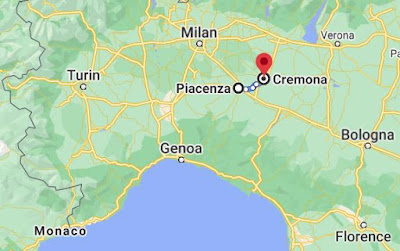 St. Zenon
There were a number of saints named Zeno, but by far the most important was the patron of Verona, which, while it is not particularly close to Piacenza, is still in the same general region of northern Italy, to the north-east of Cremona (and included in the map above).
Another relatively rare saint, not mentioned in the 1937 description, but found on a leaf now at Kenyon College, is St Domninus.
The fifth in this list of cues for lesser feasts, which runs from St Jerome (30 September) to the vigil of Sts Simon & Jude (27 October), is:
i.e. [on the feast of] Sts Domninus, Dionysius (Denis), Rusticus, and Eleutherius.
The feast of Denis and his companions was on 9 October, so this Domninus must be the one who shared their feast-day; his relics are at the cathedal of San Donnino, at Fidenza (formerly called Borgo San Donnino), between Parma and Piacenza: 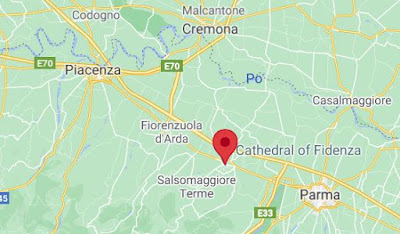 (There is also a church of San Donnino in Piacenza [Wikipedia], but this has the relics of a different saint of the same name.)
I hope that from the above it is reasonable to suppose that the manuscript was intended to be used in a fairly specific part of northern Italy, probably in the area of Piacenza, and perhaps at Piacenza itself.

It is perhaps also worth mentioning that leaves at Cincinnati Public Library, Greensboro, and Chapel Hill have cantillation markings, "p", "c", and "s" in red:

Such cantillation notes are not fully understood, but are thought to represent the person/people whose words/viewpoint are conveyed by the text of the Passion narrative (mainly a 'narrator', Christ, and the Jews or other participants), and/or the rank of the person who would read these different 'parts' as if in a play (e.g. the priest, cantor, and subdeacon), and/or the pitch/tone at which the words were said/chanted (e.g. tacite, clare, and sonoriter). For comparison, and to show how different manuscripts used different letters of the alphabet, here is an example from a 12th-century Gospel Lectionary probably from southern Germany, with the superscript red letters "t", "c", and "a":
In the case of the Ege Lectionary, "P" mark the words of Christ, "C" marks the words of the narrator, and "S" marks the words of others such as the Roman centurion. This combination of letters does not appear among the 21 different series published by Karl Young in 1910 ("Observations on the Origin of the Mediæval Passion-Play", PMLA, 25, pp. 309-354): 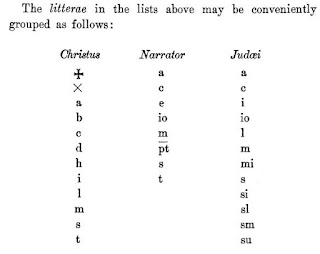 I have not yet had an opportunity time to see if they appear in the more recent literature, but they may be a clue towards dating and/or localising the manuscript.
Posted by Peter Kidd at 17:12