A New Leaf from the Pontigny Copy of Florus & Didymus

After many publication delays, vol. III of the catalgoue of the McCarthy collection of manuscripts appeared a few weeks ago [1]. One item that proved to be have a particualrly interesting provenance, from its origin to the late late 20th century, is a leaf from a 12th-century copy of Florus of Lyon's Commentary on the Pauline Epistles and Didymus the Blind's On the Holy Spirit.

A leaf that was previously unknown to me has resurfaced in the most recent catalogue of Phillip Pirages [Archive.org], so now seemed to be a good moment to set out what I found out for the McCarthy catalogue entry, and add another membra disiecta page to this site.

In 1987, Monique Peyrafort published a little-known fragment of ten leaves at the Cathedral Library of Auxerre [2], which had previously been described as fragments from an Epistolary with glosses and commentaries mainly from the works of St Augustine; she identified its text instead as parts of Florus of Lyon’s Commentary on the Pauline Epistles: a compilation of extracts from St Augustine on the Pauline Epistles. With advice from Patricia Stirnemann about the script and decoration, she dated it to the third or early fourth quarter of the 12th century.

Although there is nothing to prove its place of origin, the decoration suggested that it was probably made for a library in Burgundy or Champagne, and, of the libraries likely to have owned such a text, the great Cistercian abbey of Pontigny was a prime candidate, in part because books from this house have a better survival rate than others in the region.

As part of an exhaustive study of the Pontigny library [3], but unaware of any other leaves from the same manuscript, Patricia Stirnemann in 2001 repeated the suggestion that the ten Florus leaves now at Auxerre are likely to have originated at Pontigny, but also suggested as an alternative the Premonstratensian abbey of St-Marien at Auxerre, just a few miles away, in part because the artist appears to have been an itinerant professional who worked at both houses. 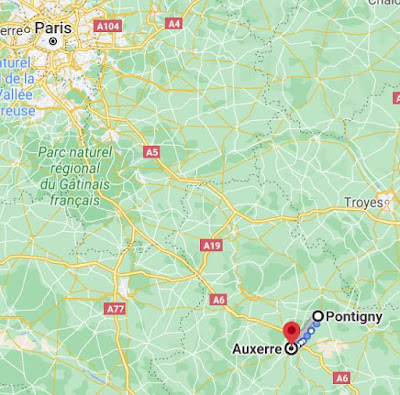 The late 12th-century catalogue of the library at Pontigny includes a volume in which the work of Florus immediately precedes that of Didymus; it includes a:

‘Book called Florus, compiled by the venerable Bede … from many books of St Augustine on the whole corpus of Pauline Epistles …’.

As Peyrafort observed, the use of the word “Florus”, apparently as a synonym of florilegium, strongly suggests that this was a work by Florus rather than Bede. The description continues:

‘… in two volumes … the first part contains the two Epistles to the Romans and the first to the Corinthians; in the second are the rest of the Epistles of the Apostle, and the book of Didymus the Blind On the Holy Spirit …’

A copy of Florus is recorded in the medieval library catalogue of St-Marien d'Auxerre, but not in combination with Didymus. The McCarthy leaf is crucial, therefore, because it contains both the end of Florus, and the beginning of Didymus, proving that its parent volume had both texts, in this sequence.

Another group of 19 leaves, and another partial leaf, resurfaced to be offered in Les Enluminures, Catalogue 4 (1995), no. 8 (attributed to "Cîteaux? or La Ferté?"). They were acquired in July 1997 by Bruce Ferrini, who broke apart the leaves to sell individually within a month: the McCarthy leaf was acquired in August 1997. Including the newly-surfaced Pirages leaf, I have now traced photographs and/or the present locations of twelve of them (listed here).

The unusual pairing of these the texts makes it all but certain that the McCarthy leaf, its scattered sisters, and the ten leaves at Auxerre cathedral, all come from the second volume of the pair of volumes described at Pontigny.

If we accept that the manuscript is indeed from Pontigny, it becomes identifiable in a series of  inventories from the 12th to the late 18th century. The abbey was suppressed in 1790 and the contents of the library moved first to Sens, and a few years later to Auxerre, with inventories being drawn up in 1791 and 1794. During and after these upheavals, a considerable number of manuscripts went astray: volume I of the pair is still missing; volume II was apparently scattered, with only ten leaves staying at Auxerre.

Ferrini or a more recent dealer also cut at a leaf (presumably the "partial leaf" that was recorded by Les Enluminures in 1995?) into much smaller pieces, like this:

Perhaps some readers own, or know of, some of the other leaves or cuttings?