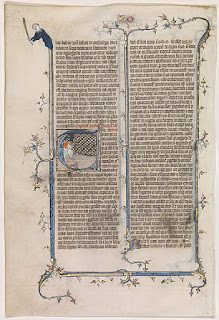 The so-called St Albans Bible (shown above) was made in Paris in the 1320s or 1330s. The earliest certain record of its existence is when it was sold as “The Property of a Lady” at Sotheby’s, 6 July 1964, lot 239, when it consisted of 526 leaves in a 16th century vellum binding. It was bought at the sale by Philip Duschnes for £1,500, and he was selling it as single leaves by the following year.
Although it was a very substantial volume, it was far from complete, "wanting the first two leaves of the prologue and the first leaf of each of the four gospels", with "initials or decorations cut from about thirty leaves". Some leaves simply have holes where the initials were cut out, and others have the holes patched with pieces of text or border decoration from other leaves: 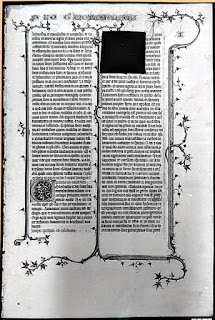 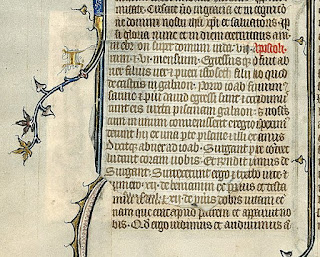 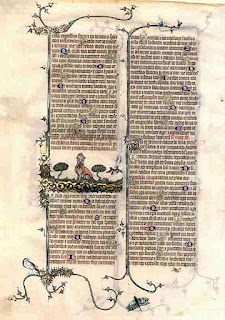 The provenance of the Bible was first investigated by Christopher de Hamel in 1981 [1]. He observed that the sheets of a 15th-century Register of John Whethamstede, Abbot of St Albans, used as flyleaves [2], were apparently from the same Register as flyleaves in a Bodleian Library manuscript which had belonged to St Albans Abbey [3]. As such a Register was most likely to have been available as waste material to a binder at St Albans, he very reasonably concluded that it is very probable that the Bible was once in the famous abbey library there.
He went on to observe that Michael of Mentmore, who was abbot from 1335 until his death in 1349, is recorded in the abbey chronicle as having provided his house with two fine Bibles: one for the monks’ use and one for the abbot’s. As the abbey already owned two late 12th-century and two 13th-century Bibles, it is possible that the one sold in 1964 was one of the two obtained for the abbey by Michael in the 14th century. Michael is not known to have visited Paris himself, but he acquired books from Richard de Bury, Bishop of Durham, who is known to have visited Paris in the 1320s and ‘30s (when the Bible was produced), and is recorded as having bought books there. de Hamel therefore suggests that the Bible was bought in Paris by Richard, and passed from him to Michael, who gave it to his Abbey [4].
Unfortunately the 16th-century binding and its 15th-century flyleaves have not been seen since 1964. It is possible that Duschnes discarded the binding and sold the flyleaves to a collector of documents who did not know their significance.
The purpose of this blogpost is threefold: (1) to show roughly what the missing flyleaves look like; (2) to briefly discuss two features of the illumination that have generally been overlooked; and (3) to draw attention to one piece of 20th-century provenance prior to the 1964 auction.
First, the flyleaves.
Bodleian Library, MS. Rawl. D. 358 [described here], contains a partially erased ex dono inscription naming John Whethamstede: 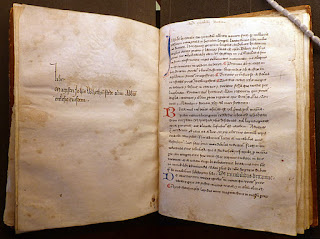 At the front of the volume, a sheet (apparently a membrane from a roll, written on only one side) has been turned sideways and folded to form two flyleaves: 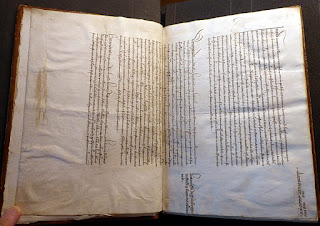 Turned the right way up, you cn easily read the date 1420 in the upper right corner:
The text concerns the election of John Whethamstede as abbot in that year; in this detail, for example, he is named on line 4 as "frater Johannes Whethamstede sacre theologie professor ... ":

Somewhere, there probably still exists a matching sheet from the binding of the St Albans Bible. Maybe a reader knows where it is.
Second, the illuminators.
Although leaves from the Bible have appeared for sale frequently over the past few decades, with the illumination often compared to the work of Jean Pucelle, the illuminator was identified in 2013 as Mahiet  [4]. Mahiet collaborated with Jean Pucelle on at least one occasion: the Belleville Breviary (Paris, BnF, ms Lat. 10483, 10484), datable to 1323–26, includes the names of the illuminators Pucelle, Mahiet, Ancelet, and Jean Chevrier.
Of these, Mahiet can be identified as the illuminator of a copy of Guillaume de Saint-Ponthus’s Vie et miracles de saint Louis (Paris, BnF, ms Fr. 5716) and of Jean de Joinville’s Vie de saint Louis (Paris, BnF, ms Fr. 13568), and had therefore been known as the Master of St Louis.
François Avril kindly confirmed the attribution. He had suggested the identification of the Master of the Life of St Louis with Mahiet as long ago as The Les Fastes du Gothique exhibition in 1981 (see no. 247 of the catalogue), and suggested that he was probably identical with Mathieu Le Vavasseur, “clerc du diocès de Bayeux”, who is recorded as a libraire in Paris in 1342 and was dead by 1352 (see Rouse & Rouse, Manuscripts and Their Makers, II, p. 94-96).
But Mahiet was not the only illuminator of the St Albans Bible. A leaf discovered just a few years ago at the Houghton Library, Harvard, has a miniature and border decoration in a different style to all the others previously published: 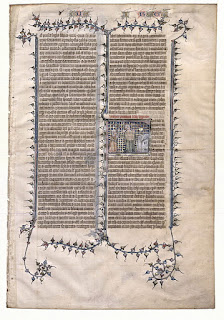 The style of the borders is especially weird and un-Parisian, and artist of the initial is clearly different: 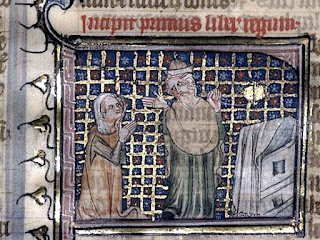 Finally, some early 20th-century provenance.
As mentioned, the St Albans Bible is first recorded in a 1964 auction catalogue. But in fact it can be shown that a few leaves were for sale in London during and after the First World War: in 1916 two leaves (a bifolium?) were offered by the London bookdealer James Tregaskis (Catalogue 777, no. 37); a bifolium and single leaves were acquired from Tregaskis in 1919 by the V&A Museum (Circ. 153-1919), and in 1923 and 1924 the V&A acquired two more (Circ. 207-1923 and 721-1924). Some of these leaves are in poor condition, and it seems likely that they were deliberately extracted from the parent volume to improve its overall appearance:
In the recently published volume covering French illumination in the McCarthy collection I was able to provide a list of about 30 leaves that have, or originally had, a historiated initial. In due course I will put this list on a new Membra disiecta page.
Notes
[1] C. de Hamel, “Leaf of a Bible Manuscript: France, circa 1330”, in Fine Books and Book Collecting: Books and Manuscripts Acquired from Alan G. Thomas, and Described by his Customers on the Occasion of his Seventieth Birthday, ed. by C. de Hamel and R. A. Linenthal (Leamington Spa, 1981), pp. 10–12.
[2] The flyleaves are described as follows in the 1964 auction catalogue:

“The two flyleaves at the beginning of the volume are from a Register of John de Whethamstede, Abbot of St. Albans, 1420–40 and 1451–64. They contain a memorandum concerning the pollution of Watford cemetery by an attack on Thomas Russell by Otwell Worsley in 1436; a Commission from John de Whethamstede to William, Abbot of Westminster, Stephen Wilton and John Kilburn to enjoin penance on Worsley and to release him from sentence of excommunication; also Letter of Proxy from John de Whethamstede to Stephen London and William Spigon to attend Convocation in St. Paul’s Cathedral on 21 November 1439, etc.”

[3] de Hamel identifies the Bodleian manuscript as MS. Douce 299; the Whethamstede flyleaves are actually in Bodleian MS. Rawl. D. 358, which was formerly part of the same volume.
[4] Mie Kuroiwa, “Working with Jean Pucelle and His Successors: The Case of the Saint Louis Master (Mahiet?)”, in Jean Pucelle: Innovation and Collaboration in Manuscript Painting, ed. by K. Pyon and A. D. Russakoff (Turnhout, 2013), 111-29; I learned of this from a blogpost by Eik Kwakkel, "Breaking Bad: The Incomplete History of the St Albans Bible" here.