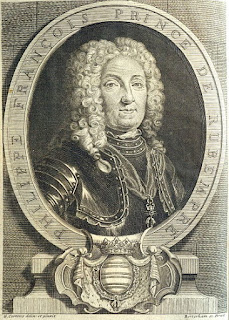 Of the other manuscripts in the 1766 Rubempré sale, at least one ought to be identifiable; lot 631 has a distinctive colophon at the end:

I have not been able to identify the present whereabouts of this manuscript [1], but I have found its appearance in another auction, about thirty years earlier:

This latter sale in 1734 is none other than that of  Jean-Philippe-Eugène, count of Merode and marquis of Westerloo, which we also discussed two weeks ago.

In other words, even if we are ignorant of its present whereabouts, these two catalogue entries provide concrete evidence of a manuscript passing from the Merode-Westerloo collection, sold in 1734, to the Rubempré collection, sold in 1766, and therefore provides support for my (as yet unproven) suggestion that the illuminated Apocalypse manuscript sold in the 1766 sale is the same as the one sold in the 1734 sale.

Can we find more support of the same kind?

is described in almost the same words as lot 112 in the 1766 Rubembré sale:

Surely they must describe the same manuscript, with the second description being based on the first.

Similarly, this was lot 17 in the 1734 Merode-Westerloo sale:

Both descriptions begin with identical wording:

In isolation, a sceptic might suggest that when two descriptions such as these correspond, it is simply because cataloguers uses fairly formulaic language, and one medieval Bible often looks a lot like another one. But taken together with the other examples presented above (and doubtless I could find several more, if I checked more thoroughly), the obvious conclusion seems inescapable: the collection sold in 1766 had absorbed a number of items from the collection sold in 1734.

[1] I am grateful to Susan L'Engle, who also tried to track it down for me.