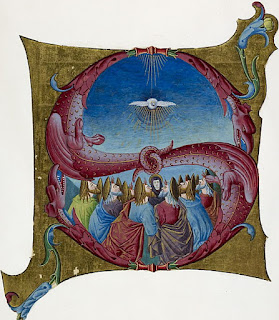 At the very end of last week's post I suggested that the initial above is the same as one described in 1821 as follows:

"Initial Letter S on one sheet.—In the larger miniature, the Letter is curiously formed by two Dragons, their tails twisted together, and within is represented the Descent of the Holy Spirit upon the Apostles, from the Cathedral Church of Como"

Readers should be sceptical: scores of depictions of Pentecost from illuminated manuscripts inhabit an initial S, because "Spiritus domini replevit" was a standard antiphon for Pentecost, and there are doubtless other initials formed of entwined dragons. So why am I confident of the identification?

To begin to answer that question, consider a subsequent lot in the 1821 sale:

"... In the first letter is a singular representation of a converted Peruvian, from the same Church [i.e. the Cathedral of Como]"

The stated subject-matter of this initial is so extraordinary that there cannot really be any doubt that it is identical with one described as part of lot 2 in the 1825 Celotti sale as:

Once a link between the anonymous 1821 sale and the 1825 Celotti sale is firmly established, we can find several other correspondences, such as these:

1821, lot 527: The Initial R, richly ornamented with pearls, cameos, &c within it a Prophet, half length, ditto

1825, lot 22: The letter R, richly decorated with Pearls and Cameos, and containing the half-length Figure of a Prophet

The latter was identified by Anne-Marie Eze as this cutting (convincingly, in my opinion, because it was later in the Northwick Park collection of illuminations, most of which came from the Celotti sale):

1825, lot 20: Christ calling Peter and Andrew, with a picturesque Landscape background; supposed to represent a View on the Lago Maggiore

Thanks to the fact that the Lago Maggiore and/or Anghiera are mentioned in successive descriptions, this cutting can be traced from the anonymous 1821 sale to the 1825 Celotti sale, where it was bought by Ottley, to John Fuller Russell (who lent it to exhibitions at the Burlington Fine Arts Club in 1874 and at the Royal Academy in 1779), in whose posthumouse sale in 1885 it was bought by Thomas Miller Whitehead, who presumably sold it to George Salting (who lent it to the 1908 exhibition of the Burlington Fine Arts Club), who bequeathed it to the British Museum.

1821, lot 534: Christ Escaping From the Jews who sought to stone him; the back ground representing an inside View of the Church of Certosa

1825, lot 15: Christ withdrawing himself from the presence of the Jews, who had threatened to stone him. The back-ground in this fine specimen represents the interior of the Church of the Certosa.

lot 541: Christ Disputing with the Doctors, the figures brilliantly heightened with gold
lot 542: The Murder of the Innocents, marked with the initial B.

1825, lot 26: Two. Christ disputing with the Doctors, and the Murder of the Innocents; both splendidly coloured, and heightened with gold

There are several other instances in which an 1821 cutting can be identified being re-offered in 1825, but I will give just one last example:

1821, lot 544: The Maries visiting the Sepulchre, with distant Landscape, the initials B. F. on the lid of the Sepulchre

1825, lot 18: A highly finished and interesting Miniature, height 10½, width 9, representing the Angel conversing with the Maries at the Sepulchre. Upon the lid of the Sepulchre are the characters B. F. as before

The present location of this one is unknown to me, but was sold in 1925 from the Northwick Park collection with a black and white reproduction as the frontispiece: 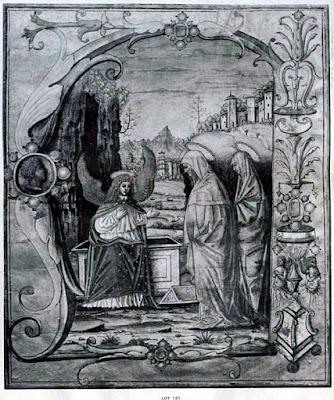 The "the initials B. F. on the lid of the Sepulchre" are more visible in this detail: 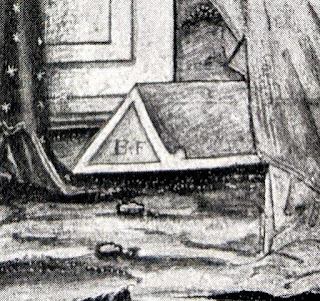 Returning to the cutting at the top of this post, the initial "S" depicting Pentecost, this was one of a group of ex-Celotti cuttings owned by Robert Curzon [Wikipedia], perhaps most famous for his book Visits to Monasteries in the Levant, that was bequeathed to the British Museum in 1917.
We perhaps cannot know the identity of the seller in 1821 for certain, but we can be confident that it was either (i) someone who had bought the cuttings from Celotti, or (ii) Celotti himself. The overlap between this group of cuttings and those known to have been brought to England by Celotti is just too great for it to be a coincidence: both include cuttings by Master B.F.; both include the attributions to the Certosa of Pavia; both include the attributions to the Cathedral of Como; and both include cuttings from Sistine Chapel Sacristy papal manuscripts, including "Six of Borders for a Choral Book, executed for Pope Innocent VIII." (lot 548) and one illuminated by "Apollonio di Buonfratelli de Capranica, Illuminist to the Apostolical Chamber" (lot 549).

As can be seen from the annotations in the images of the 1821 catalogue shown above, most of the lots that reappeared in the 1825 Celotti catalogue were bought in 1821 by Ottley. This is puzzling, on the face of it: how/why would items bought by Ottley in 1821 appear for sale as Celotti's property in 1825 -- a sale at which Ottley was a major buyer?

It seems to me that what must have happened is that Celoti was the anonymous seller in 1821, and he gave bids to Ottley to ensure that every lot achieved a respectable price (thus giving the appearance of establishing a benchmark of "fair open-markets prices"), for such cuttings; he then repaid Ottley and re-offered the same items in the 1825 auction under his own name.

It seems very plausible to me that Celotti and Ottley were acting together. Celotti must presumably have known Ottley well enough by 1825 for Ottley to have been employed to write the Celotti auction catalogue. We know that Ottley owned items by Master B.F. and/or from the cathedral of Como, and/or the Certosa of Pavia which he did not buy at the public 1825 auction, which suggests that he acquired them privately (and perhaps earlier) from Celotti.

My only hestiation in suggesting that Celotti was the anonymous owner of the 34 lots of illuminated cuttings in 1821 is that they formed part of a much larger consignment of 217 lots, and many of these other 183 lots consisted of things like prints depicting British worthies, "illustrations of Shakespear", a group of works by the 18th-century Scottish engraver Sir Robert Stange (lots 511-517), "British Topography and Historical Prints" (lots 552-591), and works by the engraver William Woolett (lots 618-626).

It seems unlikely that Celotti would have formed such a collection in Italy, and almost as unlikely that he would have formed it during his relatively brief and sporadic visits to England. I therefore suspect that the "Property of another Gentleman" sold on the fifth and sixth days of the 1821 auction was in fact the property of several people, including Celotti for the illuminations, and perhaps Ottley for some or all of the engravings, prints, etc. It may be relevant that although Ottley bought selectively on all of the first four days of the auction (buying lots 2, 30, 40, 68, 126, 133, 35, 137, etc.), he bought nothing on the fifth or sixth days, except for illuminations.

I only disovered the 1821 catalogue a few weeks ago, and have not had time to fully analyse it; the above comments are just preliminary suggestions. But I think we are potentially one step closer to understanding the origin of the spurious attributions to the Cathedral of Como and the Certosa of Pavia; to confirming that it was Celotti who imported the Master B.F. cuttings to England; and to clarifying other related questions.