Cuttings Supposedly From the Certosa at Pavia and the Cathedral of Como: A Previously Unnoticed Sale 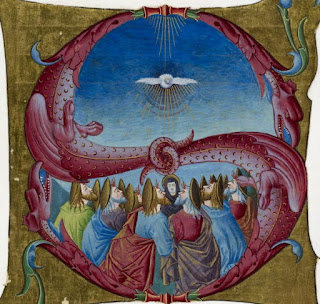 The famous Celotti auction at Christie's in 1825 consisted largely of very late 15th-century and 16th-century papal illuminations from the sacristy of the Sistine Chapel. The sale has received a lot of attention in recent decades, reaching a cresecendo about a decade ago: in the late 2000s Anne-Marie Eze catalogued the cuttings now at the British Library (and traced sister-cuttings in other collections) and submitted her PhD thesis on Celotti in 2010; in the same year Elena De Laurentiis covered some of the same ground in the exhibition The Lost Manuscripts from the Sistine Chapel. Each of them, and others, have also published articles on various aspects of the Sistine manuscripts and their fates. [1]

It is partly because the Celotti cuttings have already been so well studied that my own focus has been the other great 19th-century sale of illuminated cuttings, that of W.Y. Ottley, in 1838, as regular readers will be well aware. I do, however, think I have one small contribution to make concerning Celotti.

One effect of Covid lockdowns in the UK has been that I have sought to exploit online resources more fully, and it turns out that far more auction and dealer catalogues have been digitized than I had previously realised. I have therefore attempted trawl English catalogues prior to about 1930, in an attempt to trace the collecting of, and trade in, illuminated cuttings in England, and especially the journeys of Celotti and Ottley cuttings in the hundred years following their auctions.

One of the earliest references I have found is in a bookseller's catalogue that probably pre-dates the collecting activities of Celotti and Ottley at the end of the 18th century. The title-page of the unique(?) surviving copy is missing, but it has been attributed to the Norwich bookseller Booth and dated 1774 or 1775. It contains nearly 6,000 lots of printed books, amongst which lots are these:

The first of these might refer to portrait-miniatures, or some other form of post-medieval painting on vellum (but their dimensions and the fact that they appear to be a pair suggests that they might be the Crucifixion and Christ in Majesty full-page miniatures from a Missal). The second lot, however, unambiguously describes cuttings from medieval or Renaissance illuminated mansucripts.

Like the "miscellaneous collection" of the previous example, none of the subjects are specified, but we are told how many cuttings there are.

Ottley is known to have auctioned paintings, drawings, etc., on several occasions during his lifetime, but not illuminated manuscripts. Celotti, in contrast, is known to have sold manuscripts and cuttings at several auctions, of which the most important were (emphasis added):

Sotheby’s, 26 February 1821, and two following days: Saibante and Canonici manuscripts: a catalogue of a singularly rare collection of manuscripts ... together with numerous superbly illuminated missals ... brought to this country by the Abbé Celotti.

Sotheby’s 14 March 1825, and three following days, A catalogue of the Hebrew, Greek, and Latin antient manuscripts, the property of the Abbé Celotti ...

Christie's, 26 May 1825, A catalogue of a highly valuable and extremely curious collection of illumined miniature paintings, of the greatest beauty, and of exquisite finishing, taken from the choral books of the papal chapel in the Vatican, during the French Revolution; and subsequently brought to this country by the Abate Celotti

As far as I amaware, one important sale of illuminated cuttings has been entirely overlooked in previous studies. It predates the famous 1825 Celotti sale by four years, and represents, I suspect, an anonymous attempt by him to test the market, and perhaps to try to find out who the main collectors were.

In 1821, Sotheby's held an auction of the prints and drawings of the late W. Lock and the property of another owner, including "splendid illuminations from choral books":

A catalogue of the valuable collection of prints and drawings of the late W. Lock, Esq., ... a few paintings, &c. &c., to which are added a collection of prints by celebrated modern masters; capital drawings from the Herculaneum, &c., splendid illuminations from choral books, &c. &c. Which will be sold by auction, by Mr. Sotheby ... 3d day of May, 1821, and five following days,  (Sundays excepted) at twelve o'clock.

W. Lock's property was sold on the first four days of the sale, while the last two days were "the property of another gentleman":

Catalogued for sale on the fifth day there are 34 lots of "splendid illuminations from choral books", which comprise 89 items (there were as many as 11 cuttings in each lot). In the catalogue they appear under this headnote: 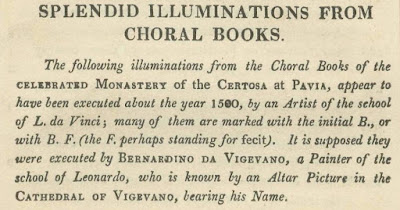 We have seen in previous posts how cuttings signed "B.F." by their illuminator are said, in the 1825 Celotti and 1838 Ottely sale catalogues, to come from the Certosa at Pavia. Here were have an earlier reference to this house as the source of the cuttings, as well as a suggestion that the "B.F." initials refer to Bernardino da Vigevano [alias Bernardino Ferrari, Wikipedia]. This is an ingenious idea, neatly accounting for the B.F. initials, the early 16th century Milanese style, and the supposed origin (whatever it was based on) at nearby Pavia: 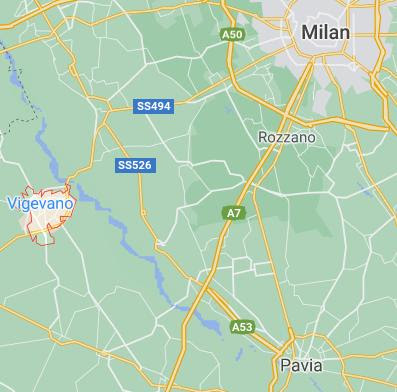 Next week I will consider some of the lots that were sold under this heading, and the identify the anonymous consignor.
To whet your appetite, here is the first lot of this group, which includes the earliest known reference, in the context of these illuminated cuttings, to their origin at "the Cathedral Church of Como":

[2]  A Catalogue of a Valuable Collection of Prints, Drawings, Books of Prints, Manuscripts on Vellum Illuminated, &c., the Property of William Wilson, Esq., of The Minories (Lately Deceased) ... Which Will Be Sold by Auction, by Messrs. King & Lochee ... April 6, 1808, and Thirteen Following Days.

The Bodleian has Francis Douce's own copy of the 1833 catalogue and it has been digitized by Google Books, so we can see that Douce annotated it, "I afterwards bought this fine MS of Thorpe":