My primary interest in the Hoe Album, until recently, was not Nebridio: it was the border cutting from the Murano Gradual, discussed here. But now that we have established that many or all of Hoe's Nebridio cuttings came from the Ottley sale, we can ask another queston: did Ottley also own the Murano cutting?

Looking at the Ottley catalogue did not provide a conclusive aswer to this question, but one entry seemed like a potential match. Lot 139, "A piece of border, splendidly gilt, and four others", is an apt description of the album sheet that ncludes the Murano cutting, except for the fact that it is accompanied by three others, not four: 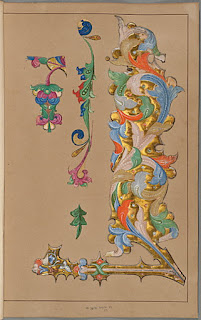 As you can see from the annotation in the right margin above, this lot was bought by "Payne", presumbly John Thomas Payne (d. 1880) of the major London bookselling firm Payne & Foss.
I deliberately omitted to mention in the previous posts about the Nebridio cuttings in lots 172 and 174 of the Ottley sale, that they were also both bought by Payne:

If my hunch that lot 139 in the Ottley sale included the Murano cutting is correct, it suggests the possibility that the Hoe Album was composed, perhaps entirely, of purchases made by Payne at the Ottley sale. The obvious next step is therefore to see if any of the other Hoe cuttings can be matched with other lots bought at the Ottley sale by Payne.
The 1838 Ottley sale catalogue has about 245 lots, many of them comprising two, three, four, or as many as thirteen individual cuttings. Payne bought twelve lots, only two of which have been identified elsewhere:
Lot 133 was bought by Payne for £2 8s; it is one of the four famous leaves from the Eadwine Psalter:
Lot 151 was bought by Payne for £1 and is now at the British Library:

"151 One—Christ standing on the bank of a Lake, addressing a Man, richly habited, in a Boat"

The other ten lots bought by Payne (including the two previously discussed, including Nebridio cuttings, and the one that potentially included the Murano Gradual border) comprise a total of 54 cuttings. When the Hoe album was sold in 1913 it was said to contain 46 items [2]. As we have seen, at least two of Payne's purchases demonstrably found other homes, so this suggests the likelihood that about 8 more of the cuttings purchased by Payne at the Ottley sale did not end up in the Hoe Album. In what follows we should not, therefore, expect an absolutely precise correlation between items purchased at the Ottley sale, and items in the Hoe album.
With that caveat, what happens if we attempt to match Hoe Album items to Ottley catalogue lots?
One fairly clear-cut case is lot 211, even though is described simply as "Four others". This must be read in context, and refers to the preceding few lots which include:
Therefore the "Four others" of lot 211 are borders probably from papal manuscripts, probably with the letters "L.X.P.M." (i.e. Leo X Pontifex Maximus) of Pope Leo X. This perfectly matches this sheet from the Hoe Album, with four "L.X.P.M." border cuttings:

It might be arguled that there are lots of borders like these in various collections, and that the Hoe group therefore cannot confidently be identified as lot 211 of the Ottley sale. The British Library, for example, has at least ten similar Leo X borders, many of them with "L.X.P.M.", including these:
But at the bottom edge of the Hoe album leaf, barely visible and partially obscured by the later Fogg Art Museum inventory numbers, is the faint pencil Ottley lot number, "211", just like those we saw in the pevious post: 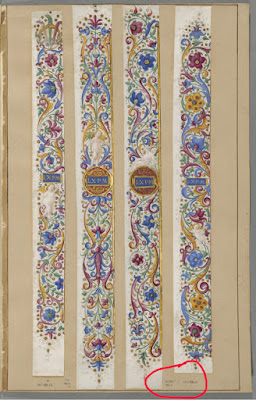 I mentoned last week that these numbers have significant ramifications. One of these is that they allow us to identify more of the Harvard cuttings with their respective lots in the Ottley sale.
Another is that they apparently prove that the Hoe Album sheets at Harvard, each with one or more cuttings attached, are not late 19th- or early 20th-century arrangements, but are the original sheets from Ottly's own collection. We are therefore given a new insight into how the collection was arranged in his own lifetime, and a new way of understanding the auction catalogue descriptions.
We now know, for example, why this group of four cuttings was sold as a group of four (not three or five, or in pairs, or singly): it is because they were physicaly mounted as a group of four by Ottley: 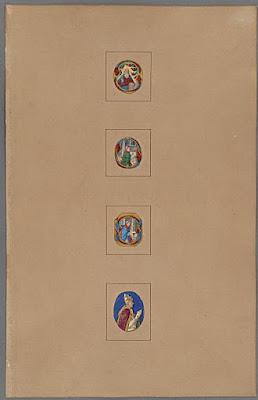 Knowing that these were a group of four at the time of the Ottley sale, allows us to identify them as lot 224 in the sale catalogue, which, it does not surprise us to learn, was bought by Payne:
Just as with lot 211, the LXPM borders, this lot is described simply as "Four others", but the preceding lots provide the necessary context, describing "small miniatures of Priests officiating at the Altar, enclosed in pieces of Border, with the Arms of Leo X" (lot 219) and "Priests at the Altar" (lot 220), which admirably describes the oval cuttings of a pope, and of priests at altars: 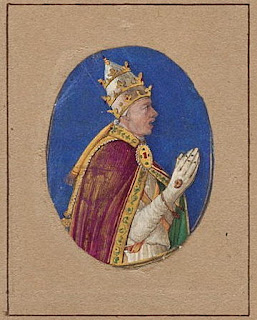 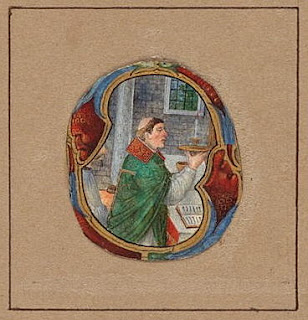 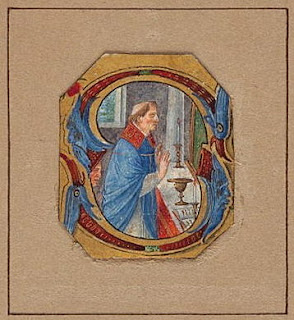 In a future blogpost I will try to see how many other Hoe-Harvard cuttings can be confidently identified in the Ottley sale catalogue.

[1] It is probable that Hoe acquired the album of cuttings at the very end of his life, probably in London, possibly in 1909.  He died in London in September 1909, very shortly before the publication of a privately printed catalogue of his manuscripts, from which the album is absent. It seems unlikely that the album was omitted deliberately, because the catalogue includes a bound collection of 32 illuminated initials, a bound set of 20 small miniatures from a 16th-century Italian Book of Hours, 8 miniatures from a 15th-century Flemish Book of Hours, several individually framed miniatures and historiated initials, and two bound volumes containig 19th-century copies of medieval miniatures. It therefore seems more likely that the catalogue was already typeset when he acquired the Houghton album, and it was too late to incorporate an extra description. See Carolyn Shipman, A Catalogue of Manuscripts Forming a Portion of the Library of Robert Hoe (New York: Privately printed, 1909) [online]. The album is also absent from the 1892 at the Grolier Club, to which Hoe was major lender of illuminated leaves. If Hoe did acquire the album in late 1908 or 1909, he may in part have been inspired to do so by visiting the 1908 exhibition of illuminated manuscripts at the Burlington Fine Arts Club.

[2] For reasons I do not understand, the numbering of the cuttings by the Fogg Art Museum runs from 7 to 52 (i.e. 46 items, the same total as in the auction catalogue description of the Hoe Album).