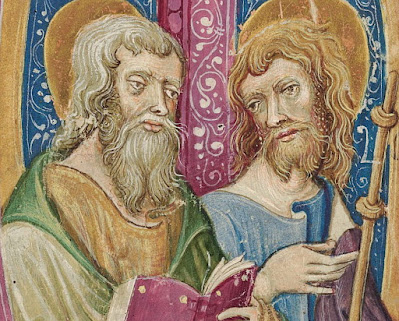 Last week we saw that two cuttings illuminated by Frate Nebridio passed from the Ottley sale in 1838, to Robert Hoe, and eventually to the Houghton Library, where they form part of MS Typ 979.

Looking through the thirteen cuttings that comprise MS Typ 979, I found that eight of the others have also been attributed to Frate Nebridio [1]. This raises the possibility that they all passed together, as a group (via as yet unidentified intermediary owners), from Ottley to Hoe. So can any of these other Nebridio cuttings be identified in the Ottley sale catalogue?

I plan to discuss the arrangment of the 1838 Ottley catalogue in more detail on a later occasion, but for now it is enough to state that lots are arranged in a very rough chronological sequence on each day of the sale, often in groups by school or artist: thus, for example, lots 41-48 are "all by the same artist" (Stefano da Verona; cf. this post), lots 65-122 (i.e. the second half of the first day's sale) are said to be from the Certosa at Pavia (in fact they are come from the Olivetan house at Villanova del Sillaro, 25km east to Pavia; cf. this post), lots 179-180 are "by Giotto" (in fact they are from the Laudario of Sant' Agnese, illuminated by Pacino), and lots 181-188 are by Don Silvestro (cf. this post).
On this basis, there is a good likelihood that the lots immediately following lot 172 (the two cuttings, one of them signed by Frate Nebridio), were also by Nebridio. Ignoring lot 173 for the moment (for reasons that will become apparent in a later post), here is the description of lot 174:

The subjects of the two itemised cuttings correspond to two of the Nebridio cuttings from the Hoe Album:

It therefore seems likely that the other seven unspecified items that formed part of lot 174 are among the other Nebridio cuttings in MS Typ 979.
MS Typ 979 includes three upper, lower, and left borders, perhaps all from the same leaf:

Despite the fact that the Ottley catalogue only describes the first two items of the nine items in lot 174 ("Two Apostles; a Bishop giving the Benediction, &c."), we can be sure that these three border cuttings formed part of the same lot.
At the lower edge of each leaf from the Hoe Album, as they were originally oriented (which we can deduce from the proportions of the margins as defined by the brown ink framing-line), is a very faint pencil inscription: 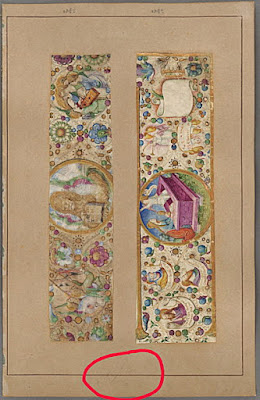 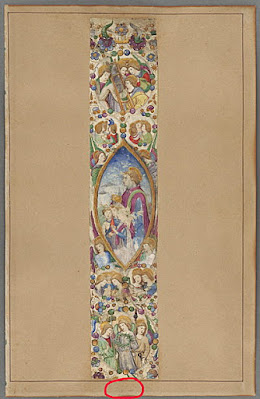 If we look closely, and enhance details of the images to increase their legibility, we can just about read the numbers "174" and "174 / 9":
It is still standard auction practice today, when a lot contains more than one item, to use this convention; i.e. "234 / 7" means "part of lot 234, which comprises 7 items". We saw an example of precisely this feature in a previous blogpost:
The implications of these Ottley lot numbers on leaves from the Hoe album have significant ramifications, and will be explored in a future post.