The previous post discussed some cuttings from a French vernacular prose romance, three of which were almost certainly in the 1838 Ottley sale, because they were later in the Holford Album, which was apparently formed entirely of items from the Ottley sale. Another two, apparently from the same parent manuscript, are at the V&A Museum.

In today's post I will look more closely at the provenance of the V&A cuttings, to see what it might tell us, not only about these French cuttings, but also about the other cuttings acquired as part of the same acquisition.

The two French cuttings were bought by the V&A from Charles Fairfax Murray (1849-1919) [Wikipedia], the pre-Raphaelite painter, collector, dealer, and friend of Ruskin, Morris, Burne-Jones, Rossetti, et al. They were acquired from him in 1894 as part of a group of nineteen, and given consecutive Museum inventory numbers from 799-1894 to 817-1894. The price of the group of 19 was £190 10s 10d, which might suggest an average price of about £10 each, but in fact more than half of the total, £100, was for a single cutting by Girolamo da Cremona, to which we will return in the next blogpost. [1]

Another member of the group was the German Psalter leaf discussed in the earlier blogpost, which cost the V&A £21:

which, as I showed, can be identified in the Ottley sale.

Another that can be identified in the Ottley sale with a fair degree of confidence is this historiated initial, which was probably lot 44 among a group of cuttings illuminated by Stefano da Verona, sold as consecutive lots:

"44 -- By the same [illuminator], of Christ withdrawing himself from the Jews, who had threatened to stone him ...".

If there is any doubt about identifications such as this, there can be no doubt whatsoever about the next one.

"Another, [i.e. sheet of parchment, in which are represented Scriptural Subjects] in forty-two compartments ..."

is obviously one of the four famous leaves from the Eadwine Psalter [Wikipedia], sold to the V&A by Charles Fairfax Murray for £50:

I hope that these examples prove the point that some, possibly all, of the illuminations sold by Murray to the V&A had come from the Ottley collection. But the Ottley sale took place in 1838, and Charles Fairfax Murray was not born until 1849, so there must have been at least one intermediate owner. 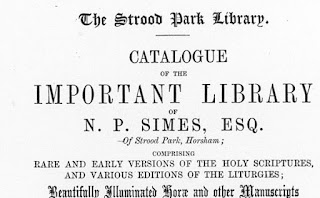 The "Important Library of N[athaniel] P[hilips] Simes, Esq. [(1805-1889)], of Strood Park, Horsham", was sold at Sotheby's, 9 July 1886, and 5 following days. The six-day sale consisted almost entirely of printed books, but there were also a few manuscript codices, and two lots of miniatures. The description of lot 1095 begins:

"1095   MINIATURES, &c. A Very Valuable Series Of Miniature Paintings And Illuminations, collected chiefly by W. Y. Ottley during his Travels in Italy, at the commencement of the French Revolution, including several from the celebrated Monasteries of Como, the Certosa of Pavia and Orvieto ..."

(The mention of Como, Pavia, and Orvieto will be significant to anyone who has looked at the Ottley sale catalogue.)

The first item listed in this lot is:

"The History of Our Saviour represented in 42 compartments, a Saxon work of the XIth Cent. size 15 in. by 11½ in."

The second item is:

"The Almighty with the Symbols of the Evangelists, and on the Reverse the Resurrection and Ascension of Christ."

i.e. the German Psalter leaf shown above, described as lot 18 in the Ottley sale in identical words:

"The Almighty with the Symbols of the Evangelists, and on the reverse the Resurrection and Ascension of Christ"

Among the other items listed as part of this lot are:

"Three highly finished Miniatures from a French Romance of the XIIIth Cent."

It seems fairly certain that two of these three miniatures are the ones sold by Murray to the V&A.

If we turn now to the Ottley sale, we find lot 128 described as:

In this description "of the same school" refers to the previous lot, miniatures from the Psalter-Hours of Yolande of Soissons (now NYC, Morgan Library, MS M.729) which are of similar date and place of origin. Further strengthening the likelihood of this identification is the fact that lot 128 at the Ottley sale was bought by "Tindall", the source of most of the miniatures in the Holford collection. Presumably of the six miniatures in lot 128, three went to Holford and three went (directly or indirectly) to Simes, and then at least two of the latter were acquired by Murray, who sold them to the V&A.

We saw in the previous blogpost that Francis Douce bought his three sister-cuttings in London in 1816. If cuttings from the parent manuscript were on the market in London in 1816, it is easy to see how some of them came to be in Ottley's collection before his death in 1836. It is likely that more cuttings from the same parent manuscript await recognition; if the two at the V&A and the three in the Holford sale do indeed come from lot 128 in the Ottley sale, which consisted of six, then there is at least one more still to be found.

What I hope to have shown here is that, even if manuscript cuttings are described in very vague terms in a catalogue (e.g. "Six smaller miniatures, of the same school"), it may still be possible to identify them by studying their later provenance and the collections through which they passed.

In the next post I will look in more detail at some of the other miniatures sold by Murray to the V&A.

[2] It has sometimes been suggested (e.g. in Rowan Watson, Vandals and Enthusiasts: Views of Illumination in the Nineteenth Century (London: Victoria and Albert Museum, 1995), p. 17 no. 28) that this leaf may have been lot 179 in the Ottley sale: "The Ascension, richly gilt, in a border, supposed to be painted by Giotto"; in fact, the latter was almost certainly a miniature by Pacino, now Getty Museum, MS 80a.