Manuscripts Written at Rome in 1465, Now at the V&A and Houghton [I]

A reader sent me an enquiry about a manuscript a few weeks ago, that sent me off on a provenance-hunting trail with a very satisfactory result. The image above shows the last page of the manuscript, a copy of Andrea Domenico Fiocchi (alias Fenestella), De Romanorum Magistratibus, which is at the Houghton Library, and this is a detail, showing that the scribe dated its completion in 1465:

The most recent account of the manuscript's provenance is in the 2016 Beyond Words exhibition catalogue [1], cat. no. 201, by Rowan Watson, as follows:

"The manuscript was originally bound with a copy by the same scribe, and with the same white-vine decoration, of Macrobius's Saturnalia, a work of c. 430 CE composed in Christian Rome (London, V&A, MSL/1952/1769) [...] The V&A manuscript has the arms of the Maffei family: Gherardo di Giovanni Maffei of Volterra (1398-1466) or his sons, all papal servants, would be candidates for the identification of the first owner"

The V&A manuscript referenced here is described in Rowan Watson's 2011 catalogue of the V&A's illuminated manuscripts (vol. II, no. 105) [2], where the provenance begins:

Here is the first page of the V&A manuscript, and a detail of the arms of the Maffei of Volterra family, held by a putto in the lower border: 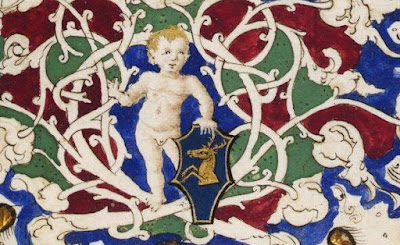 The challenge is to see if the unsupported claims can be verified, and gaps in the provenance of each manuscript can be filled.
I have written elsewhere that "The Schoenberg database can be a source of provenance pure gold, but it can also send the researcher off on fruitless and time-wasting wild goose chases." Fortunately, the present case is an example of the former!
Because the manuscripts are both dated, and are relatively uncommon texts, a search of the database using the date and and author or title search produces a small and very manageable number of hits. We quickly find that both formed a single volume that was, unambiguously, in the sale of the library of Henry White, at Sotheby's, 21 April 1902, lot 1406:
This description provides new, crucial, and previously unpublished information: the volume was the "Wodull copy, formerly Dr. Askew's":

The Askew provenance is significant because his library contained a large number of manuscripts with the arms of the Maffei of Volterra, including about a dozen now in the Burney collection at the British Library and at least two at the Houghton Library; here are just three of them:

By following the auction catalogues backwards we have therefore verified that the volumes were indeed bound together by the 18th century, and doubtless since the 15th century. The path of manuscripts from the Maffei to Askew is well established [4], so we have a nearly unbroken provenance from the 15th to the early 20th century: from Maffei to Askew to Wodhull to White.
What remains to be clarified is their 20th-century provenance, from the White sale in 1902 to their present locations; this will be the subject of the next post.
Notes
[1] Beyond Words: Illuminated Manuscripts in Boston Collections, ed. by Jeffrey F. Hamburger and others (Chestnut Hill, Massachusetts: McMullen Museum of Art, Boston College, 2016); and online.
[2] Rowan Watson, Western Illuminated Manuscripts: Manuscripts in the National Art Library, V&A, from the Eleventh to the Early Twentieth Century, 3 vols (London: V&A Museum, 2011).
[3] The Maffei provenance of this manuscript was apparently not noted until I published it, in passing, in ‘An Unnoticed Photograph at Houghton Library; or, Unknown Leaves from the Library of Raphael de Marcatellis’, Harvard Library Bulletin, vol. 21 nos. 1-2: Piecing Together the Picture: Fragments of German and Netherlandish Manuscripts in Houghton Library, ed. by Jeffrey F. Hamburger (2010), 143–51. In the same article I attributed MS Typ 47 to the same family, but this was apparently a typo; I have yet to establish the correct call-number.
[4] B. L. Ullman, 'Codices Maffeiani', in Studies in the Italian Renaissance (Rome: Edizioni di Storia e Letteratura, 1955), pp. 373-82, and José Ruysschaert, 'Recherche des deux bibliothèques romaines Maffei des XVe et XVIe siècles', La Bibliofilia, 60 (1958), pp. 306-33.
Posted by Peter Kidd at 16:11