Manuscripts Written at Rome in 1465, Now at the V&A and Houghton [II] 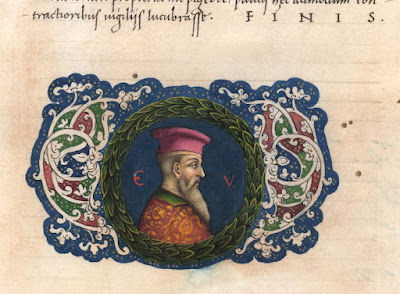 Howel Wills (1854-1901) was a collector in whom I've had an interest since the 1990s, when I catalogued some of his manuscripts now at the Bodleian. On my old provenance webpages, made in the early 2000s, I posted some basic biographical information and some images to show how his books can be recognised. More recently, I have occasionally had the chance to mention him in blogposts, such as here. [1]

As can be seen from the annotation in this image, the manuscript was bought by Quaritch for £20, and I suspect it was offered for sale in their Rough List no. 144: A rough list of choice and valuable books...[f]rom the library of Howel Wills, Esq., of Florence (August 1894), but I have not yet had a chance to verify this.
We saw last week that the manuscript was sold (eight years after the Howel Wills sale) as part of the library of Henry White in 1902, but in last week's post I showed an unannotated copy of the catalogue description. If we look at an annotated copy, we discover that the buyer was Leighton, for £8 8s (i.e. 8 guineas):

Leighton must have been responsible for separating the volume into its two constituent parts, now at the Houghton and V&A libraries.
The V&A Manuscript
In the catalogue description of the Macrobius portion of the manuscript, now at the V&A, it is recorded that the binding has the stamp of "Leighton, Brewer Street, W". Messrs. J. & J. Leighton were both a successful firm of antiquarian booksellers and a bindery: the bindery rebound books for the bookselling part of the business as well as for external clients, including, famously, the Kelmscott Press. [2]
Leighton moved from 40 Brewer Street to 25 Heddon Street in June 1922, which gives us a terminus ante quem for the separation of volume into its two constituent manuscripts. In fact, they had apparently separated the two manuscripts by 1905, as shown by Laura Cleaver's entries in the Schoenberg Database, based on the Leighton stock books.
It was later owned by Harvey Frost, who sold it to the V&A in 1952.
The Houghton Manuscript
The 20th-century provenance of the Houghton portion of the manuscript, the Fenestella text, is reasonably well documented. According to the 2016 Beyond Words exhibition catalogue:

The unidentified and undated Leighton catalogue can now be identified as their Catalogue Nine: Rare Books XV to XVIII Centuries, which has the Heddon St address, and therefore dates from between their 1922 move from Brewer St, and their next move, in 1928, to 100 Great Russell St.: 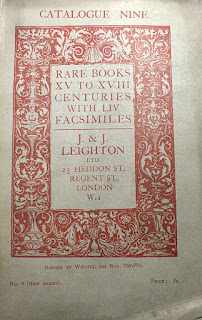 I do not have the text of the catalogue description of our manuscript, but I have its two reproductions, proving that was no. 789: 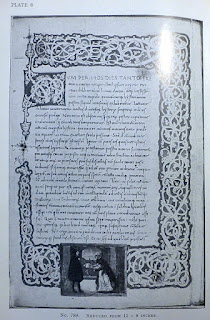 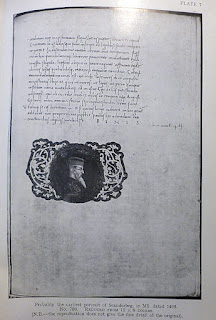 We can also add some detail to the later provenance as listed in Beyond Words. At the 1955 Sotheby's sale, the manuscript was offered as "The Property of a Lady"; she presumably had a taste for high quality Italian humanistic manuscripts, as she also owned the previous lot, lot 56 "A Manuscript from the Library of Federigo da Montefeltre [sic], Duke of Urbino", a fine humanistic manuscript of an unidentifed astrological treatise: 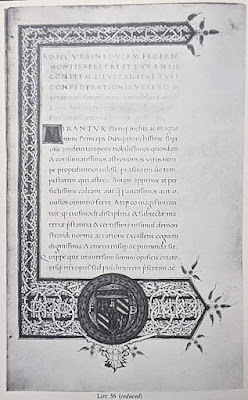 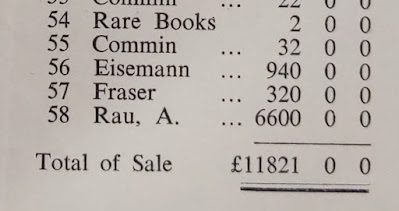 They offered it in their Catalogue 166: Rare Books and Early Mss. the following year for £750: 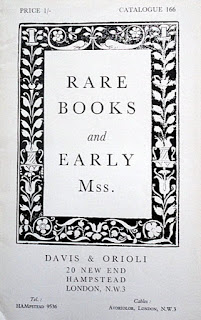 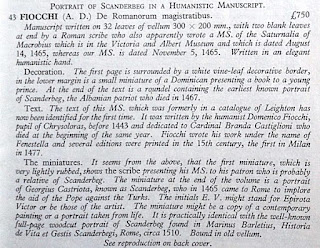 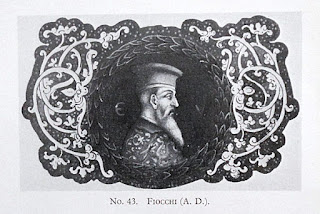 We can also fill part of the gap between the 1902 White sale and the appearance in a Leighton catalogue in the 1920's; a recent addition to the Schoenberg Database shows that it was being offered in 1911 by Tamaro de Marinis.
So, to summarise, the provenance as far as we have been able to ascertain it, is:
Notes
[1] Much more detailed biographical information can now be found in Helen Wang, 'How did Kutsuki Masatsuna’s Coins Come to the British Museum?', in Catalogue of the Japanese Coin Collection (pre-Meiji) at the British Museum with special reference to Kutsuki Masatsuna (British Museum, 2010) [online here], pp. 13-14 (and footnotes), as follows:

Wills then embarked upon a legal career. He was admitted as a Member of the Inner Temple in 1875, aged 21, and was called to the bar in 1882. He was on the Western Circuit in 1883 (equity, draughtsman, conveyancer), and his address for the years 1884–95 was 1 King’s Bench, Temple. The name of Howel Wills remained in the Law List until 1901, the year of his death, but with no address after 1896.

Howel Wills died in Verona on 7 December 1901, unmarried and without issue. He is best known for his interest in antiquarian books, fine art and other antiquities. Indeed, in February 1894 Christie, Manson and Woods arranged three sales of collections belonging to Mr Howel Wills, of Florence: ‘collection of engravings, etchings, drawings by and after old and modern masters’ (13–14 February); ‘collection of antiquities and objects of art’ (15–16 February); ‘collection of pictures by old masters’ (17 February). In July that year, ‘the great sale of the library of Mr Howel Wills, of Florence … the principal book sale of the season’ took place at Sotheby, Wilkinson & Hodge, 11–17 July 1894, realizing a total of £8,204  11s."

[2] Information about the Leightons as bookbinders can be found here. I plan to do a blogpost on the catalogues of the bookselling side of the company, many of which are undated.

[3] The V&A volume has an erased inscription in the upper margin of fol. 1r, typical of MSS from the Maffei family; it probably read 'De figliuoli et heredi di M(esser) Mario Maffei' ie Mario Maffei junior, who died in c.1600, the son of the adopted son of Mario Maffei (1463-1537).