The online images were pretty terrible, so I contacted the auctioneers to ask for better photos, and it turns out that the cutting is rather attractive: 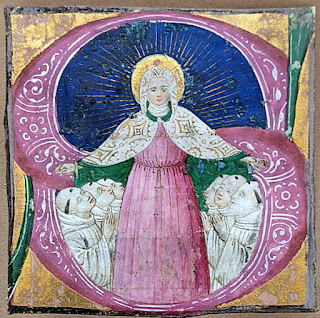 It is about 72×72mm (or 2¾×2¾ inches). The iconography of a female saint, presumably the Virgin, as protectress of a community of white-clad monks (possibly Cistercian, but more likely Olivetan or Camaldolese), is not very common, [Wikipedia] but can also be seen, for example, in this enchanting cutting in a Douce album at the Bodleian:

Because of my interest in the 1838 Ottley and 1825 Celloti sales, I naturally wondered if the recently-auctioned cutting might have been in one of those auctions. This seems possible both because it is (like a large proportion of the Celotti and Ottley ones) Lombard in style, and because it is trimmed close to the edge of the initial (unlike the later 19th-century taste for preserving some of the surrounding text, or even the whole leaf). Proving that it came from one of those early sales would be very difficult or impossible, however, as their catalogues tend not to describe the smaller and less important cuttings such as this.

The only obvious clues to earlier provenance are pencil inscriptions on the back of the cardboard mount (barely visible in this image): 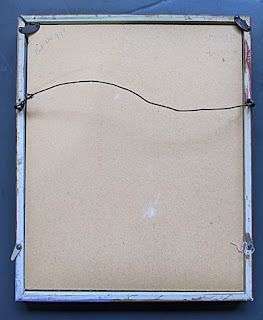 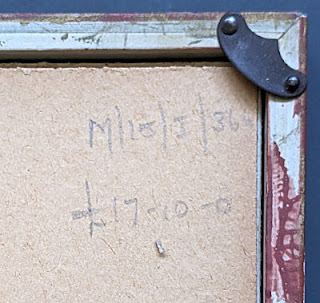 The four-part code suggests that it was sold by a dealer who had a varied and sizeable turnover (does the "M" stand for Manuscripts, or Miniatures, perhaps?). The handwriting does not look very old, but the price tells us that the mount pre-dates the decimalisation of British currency in 1973; I would guess it was written in the 1950s or '60s.

The handwriting and forms of annotation are not characteristic of Bernard Quaritch or Maggs Bros., so I guessed that they might belong to one of the middle-rank booksellers who handled illuminated manuscripts, such as Alan Thomas, or Myers & Co. of Bond St. 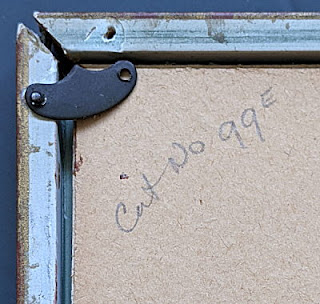 This could refer to a Catalogue no. 99 (which would rule out Alan Thomas, as his catalogues only reached about no. 45 in the 1980s), or might refer to an item no. 99E within an unidentified catalogue -- in which case finding it could be like trying to find the proverbial needle in a haystack. I have copies of most of the Alan Thomas catalogues, and checked a few of them to see if any of them had our cutting as no. 99E, but without any luck.

Then somethign in my subconscious suggested I should instead look at my PDFs and photos of the "Collectors' Corner" catalogues of the Folio Society, whose leaves and cuttings are usually recognisable by a printed label like this: 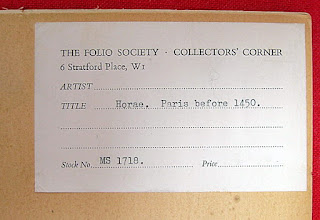 Despite the absence of such a label on the back of our cutting's frame, I had immediate success. The earliest Folio Society Collectors' Corner catalogue of which I have images is Catalogue 3, issued in Spring 1961: 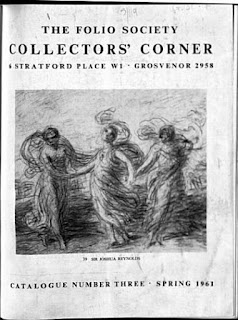 This catalogue includes a number of illuminated cuttings and miniatures, among which no. 99e matches our cutting in subject-matter, dimensions, and price, as well as being attributed to a Lombard illuminator:

Next week I will show how this positive identification enables us to trace the provenance back much further.
Posted by Peter Kidd at 09:48