"Leaf from an
Armenian Manuscript Bible
1121 A. D.

Fifth century translation by Mesrop written in the Haikian alphabet of thirty-eight characters (Iron writing) on early paper of the Near East. The Mono-physitic doctrine and many other ‘heresies’ in the Armenian translation were a source of continual controversy with the Greek and Roman churches."

In Scott Gwara's Otto Ege's Manuscripts (2013), he explains, mostly in a footnote, that the date 1121 was a mistake, based on a misunderstanding of the parent manuscript's colophon, which in fact not only gives the year of writing as 1120, not 1121, but is also dated according to the Armenian era [Wikipedia], in which year 1 began in the equivalent of our July 552: thus the manuscript was in reality written in 1671 C.E./A.D.
Gwara summarises his source (Avedis K. Sanjian, A Catalogue of Medieval Armenian Manuscripts in the United States (Berkeley, 1976), pp. 64-5), but his footnote and his source seem to have been largely overlooked by subsequent writers. Because it contains significant provenance information, it may be as well to quote from the latter at some length [2]. Describing two leaves, Sanjian writes:

"The MS. to which these leaves belonged was described in detail by H. Ačaṙean in 1919 in Tehran, Iran, when it was in the possession of a Persian dealer. At that time, the book consisted of 508 folios decorated with many simple marginal ornaments. At least 213 folios from the original MS. were missing; hence the book originally consisted of at least 721 folios. Although the principal colophon has been lost, the book contained a long colophon in verse and several brief notices that provided the basic data concerning its production. According to these, the codex was written by two scribes, Astuacapov (or Asapov) and the deacon Tēron. It was executed in A.E. 1120 (=A.D. 1671) at Šoš (or Isfahan), for Yohan, son of Yovhannēs, and Ełisabet."

I have not seen the 1919 description (and would not be able to read it anyway), so I do not know for certain how Sanjian knew that 213 out of 721 leaves were missing, but I assume that he was able to deduce this from gaps in a foliation. There do seem to be folio numbers in purple pencil, visible on the rectos of most leaves, between the columns of text and level with the top line, as in these examples:
Sooner or later someone will attempt a reconstruction of the parent volume, so I urge any owners of leaves to record the folio numbers when cataloguing their leaves, as they are often not clearly visible in photos.
UPDATE, 17 October 2021:

Sylvie Merian, of the Morgan Library, has been in touch and tells me that she has been working on this MS for many years. She would be glad if readers would bring to her attention any leaves that they encounter, at: smerian@themorgan.org
She also provides a correction and some amplifications to what I wrote above. The correction is that although Sanjian implied that Ačaṙean published his description in 1919, the former only states that the latter described the manuscript in 1919; the description was in fact not published until 1936. She tells me that the 1936 catalogue records that the volume was already in bad shape by 1919, and had no binding. It contained several colophons, including one dated 1120 and another dated 1121 -- so this is where Ege got the 1121 date from.
Looking at images of sister-leaves more closely, I have realised that they do not all have 33 lines per page. Oberlin College Library has two leaves, for example: one leaf has 32 lines per page, while the other leaf has 33 lines on one side and 35 on the other (images and descriptions are on Digital Scriptorium).
It was not only Ege who sold leaves; Philip Duschnes had a significant cache as well, and was selling them by 1941:

Note that he quotes the "colophon which read 'Finished Easter Eve 1121 A.D.'" (but we can be confident that it did not say "A.D."!)
As mentioned above, the MS is reported to have had 508 leaves in 1919; such a large number makes it statistically all the more probable that any single leaf now in the USA comes from this MS.  If in doubt, send images to Sylvie!

Prompted by Scott Gwara's comment below, I thought it would be worth adding here the 1936 summary description in German, and the 1976 Sanjian description of two sister-leaves (I owe these images to the kindness of Sergio La Porta): 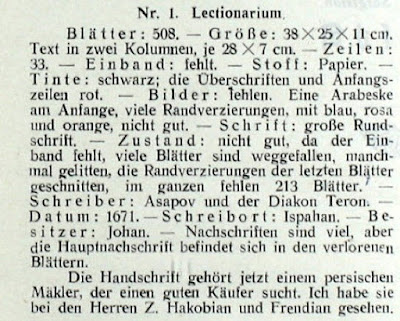 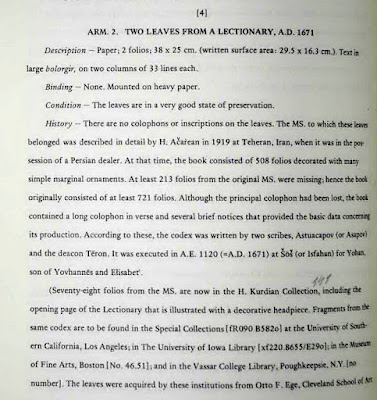 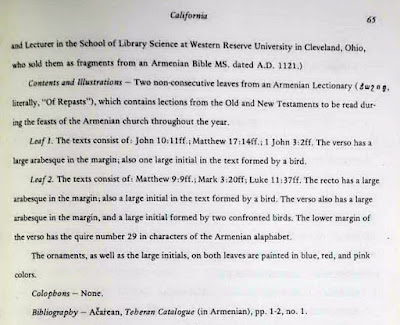 Edit, 4 Nov. 2021: Scott points out to me that the broadside sheet that accompanied the Oriental Leaves portfolio refers to Ege as "the late Dean of the Cleveland Institute of Art", and thus it must date from after his death in 1951.

[2] I am very grateful to Sergio La Porta for very kindly providing me with a scan of the relevant pages and much other help with Armnian manuscripts.