Otto Ege's "Chain of Psalms" Manuscript: Another Update and a Cautionary Tale

Things have moved rapidly since last weekend's two blogposts about Otto Ege's manuscript of the Sermons of Philip the Chancellor.

David Gura kindly sent me an image of the first page of the Notre Dame manuscript (shown above), which allows us to see the decorated initial, and the incipit with abbreviations that von Scherling expanded incorrectly:
Lisa Fagin Davis has published a round-up of recent and ongoing studies of individual Ege manuscripts, on her always-entertaining and informative blog, Manuscripts Road Trip.

Yin Liu and Ariel Brecht of the University of Saskatchewan have been in touch, and kindly sent me a preview of their article about the manuscript, which will appear in the next issue of Florilegium: vol. 33, "Medieval Manuscripts in Canada"; their article contains much that was unknown to me, and is titled "Leaf 4 in Otto Ege’s Fifty Original Leaves Portfolio – A New Identification: Sermons by Philip the Chancellor (With a Partial Handlist of Sermons on Leaf 4 from Various Collections)".

Heather Wacha commented on the blog to reveal that it was she who independently identified the text of the Iowa leaf, when working part-time as a graduate student in 2014 in Special Collections at the University.

And David Gura has also very kindly sent me a partial scan of Bernard Rosenthal's Catalogue XII (1961), from which Notre Dame acquired their large portion of the manuscript. Here is the relevant entry:

As you can see, there is nothing here to link it to the manuscript tersely described in the 1805 Laruelle auction catalogue, as reproduced in my previous post:

So where did the idea originate, that the Laruelle and the Ege-Rosenthal-Notre Dame manuscripts are one and the same?

The culprit must surely be the Schoenberg Database of Manuscripts (SDBM), and it may therefore be worth using this case to tell a cautionary tale.

Here is the Schoenberg Database record for the manuscript in the 1961 Rosenthal catalogue: 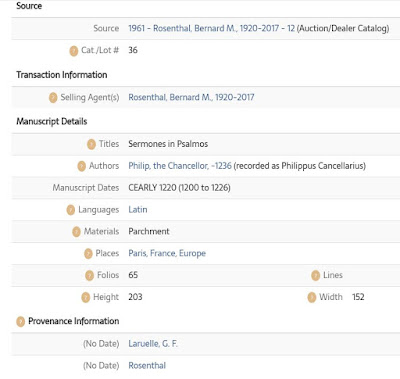 At the bottom it indicates that the record has been updated as recently as 2014:

and at the top is a note that "This entry has been identified as belonging to manuscript record SDBM_MS_4822, which has 2 entries in the SDBM.":

Following this link takes the user to two records; the 1961 Rosenthal one, and the 1805 Laruelle one: 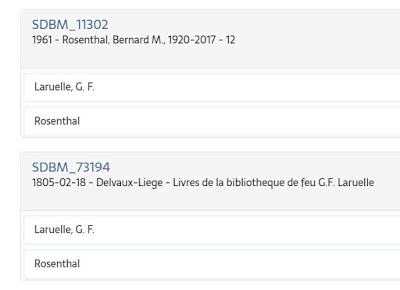 And following the link from the second of these, to the full Laruelle record, the user sees that the manuscript there is reported as having exactly the same date and place of origin (1200 to 1226, Paris), material (Parchment), number of leaves (65) and precisely the same dimensions, accurate to the millimetre (203 × 152 mm): 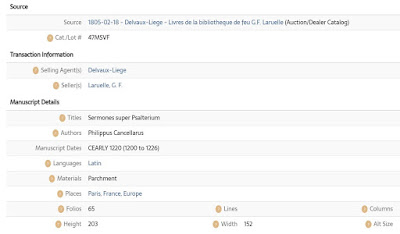 Most researchers would quite reasonably assume that this puts the identification beyond all reasonable doubt, and that the Laruelle and Rosenthal manuscripts must be the same one ... yet almost none of the data presented in the database record shown above are derived from the cited source, the 1805 Laruelle catalogue [1]:

The Scheonberg Database does have a prominent warning advising users to "confirm data with the identified source when possible":

but in this case (and very many others), most users would not be able to independently verify the accuracy of the database record.  I was unable to locate a copy of the 1961 Rosenthal catalogue anywhere in London, for example (the British Library and the Warburg Institute each hold a series of his catalogues, but both lack Catalogue XII), which is why I had to rely on David Gura's kindness to obtain a scan of the relevant entry -- and even he had to recall Notre Dame's copy of the catalogue from his library's off-site storage.

The Schoenberg database can be a source of provenance pure gold, but it can also send the researcher off on fruitless and time-wasting wild goose chases. In the present case, it took some time and effort to determine that the association of the Rosenthal manuscript with the Laruelle one is entirely baseless.

Although there appears to be no actual evidence that the manuscript in the 1961 Rosenthal catalogue is the same as the one in the 1805 Laruelle catalogue, they might nonetheless, hypothetically, be the same volume. I therefore wondered if it might be possible to form an opinion of its likelihood.

I think we can be confident that the two manuscripts are not the same one. The vast majority of Laruelle's medieval manuscripts came from the abbey of St Jacques at Liège, discussed in previous posts. In the 1788 catalogue of the St Jacques library, there is a single copy of the Sermons of Philip the Chancellor, on parchment, but it must be a different manuscript, because it is written in two columns, not one:

It is theoretically possible that Laruelle did not acquire the St Jacques copy of the text, yet did own another copy of this uncommon text, the one later owned by Ege, but this seems very unlikely.

It is a pity, in some ways, to "lose" Laruelle from the provenance of the Ege manuscript, but there are alternative avenues to explore. One is an erased inscription, apparently a medieval institutional ownership inscription, in the upper margin of the first page. Here is a detail of the image that appears at the top of this post:

and here is a somewhat manipulated version:

I am reasonably confident that this includes "sci." (sancti), preceded by a word or words ending with "s", perhaps "Ex libris". Someone with more patience and better image-editing skills than me, may be able to read more.


EDIT, 17 August 2019
It has just occurred to me that the 1805 description of the text being in two columns might refer to the main column of text, plus the outer margin, which sometimes has enough writing to appear like another column of text.


[1]  The identical dimensions in both Database entries requires explanation. In the first several years of the development and expansion of the Schoenberg Database, if two different records were thought (however slim the evidence) to refer to a single manuscript, it was assumed that the more recent record was more accurate, and the older one was therefore edited to bring it into conformity with the newer one, adding data to, or deleting data from, the older record as necessary. This, regrettably, means that a lot of original data derived from old catalogues has been purged from the database. In addition, if the older and the newer records provided complementary but different data (e.g. if Manuscript I was recorded as having been owned by Collectors A and B, and Manuscript II was recorded as having been owned by Collectors C and D), both records were changed, so that both list all four Collectors in their provenance. Without going back to the original catalogue descriptions, there is no way to untangle this regrettable merging of unrelated data.

As an aside, it may be worth explaining the strange way in which some dates are represented in the Schoenberg Database. In the spreadsheet created by John Feldman, which formed the foundation of the Schoenberg Database, there was a field in which "complete" manuscripts (i.e. lacking no leaves) would be indicted with the letter "C": 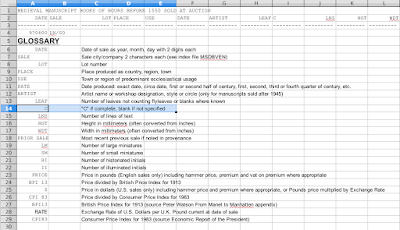 It seems that this "C" was apparently misunderstood by the designers of the Schoenberg database as an abbreviation for "circa", and thus merged with the date field to create dates such as "CEARLY 1220".
Posted by Peter Kidd at 09:18