The Nationality of the Sées Missal 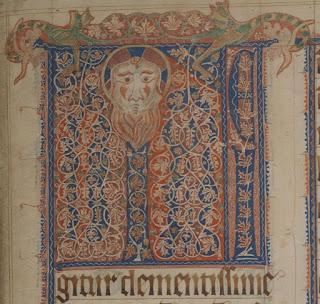 A month ago I blogged about a Missal at Sées, datable to c.1332 (plus or minus 5 years) which I claimed to be English. Since then I have spoken to two specialists of English illumination, who both agreed that the script is English, but expressed scepticism about whether the decoration is English as well. So before posting a blog about the contents of the Missal, which has been sitting in my "Drafts" folder for some weeks, I feel I ought to address this issue.

First, a word about definitions. Whenever I refer to illumination as "English" (or "French", or whatever), I mean that it is English in style -- I am not saying that it was necessarily produced on English soil. I would argue that the work of the Fastolf Master was still "French", even when he was geographically working in England, and the work of the Master of the Brussels Initials was still fundamentally "Italian", even when he was working in Paris and beginning to assimilate influences from his French colleagues.

In the introduction to the first volume of Pächt & Alexander's catalogues of illuminated manuscripts in the Bodleian Library, they explain that:


"We have tried to place manuscripts according to the context and stylistic origin of the illumination. ... Thus the Anglo-Norman manuscripts ['made by Norman monks on either side of the Channel'] are included in the French lists in Vol. I, whilst the eighth- and ninth-century manuscripts, even though made in Germany ['by Anglo-Saxon monks'] will appear in Vol. III in the English lists."

This seems to me to be an eminently sensible approach, even if some people think it sounds old-fashioned to have titles like Illuminated Manuscripts ... Italian School.

What, then, makes me think that the Sées Missal is English?

First, I see no reason to doubt that the scribe Roger, working for Ralph, Prior of Lancaster, was "English": even if he were French by birth, or physically located in France while writing, he writes a typically English script.

Second, I am confident that the minor decoration is English. Manuscripts from other northern European countries usually have minor initials that are alternately red or blue, often with pen-flourishing in the other colour. In England, by contrast, it was very common by the 14th century for all the initials to be blue, embellished with red penwork. Patricia Stirnemann traces this back to the second quarter of the 13th century, and suggests that it may have been due to the fact that it was easier to execute penwork with red ink than with blue (Avril and Stirnemann, Manuscrits enluminés d’origine insulaire VIIe-XXe siècle, Paris, 1987, p. 49).

A typical opening of the Sées Missal looks like this: 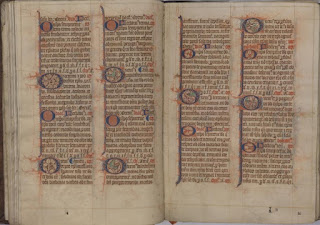 The 1-line initials do not alternate between red and blue: 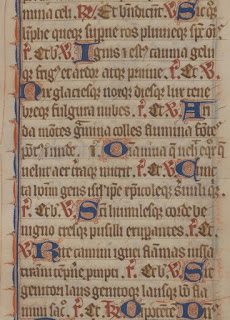 Likewise, the 2-line initials are all blue, filled with dense red penwork:

I first learned that this is a characteristically English feature from Destrez's La pecia (Paris, 1935, p.53):

Destrez's comments were based on his examination of many thousands of 13th- and 14th-century manuscripts of university texts, as a result of which he was able to confidently isolate features characteristic of Paris, Oxford, Bologna, and Naples.

Often the 2-line initials of the Sées Missal exemplify another characteristically English feature: the use of the red penwork to create leafy (or other) designs reserved as plain parchment:

About this type of initial, Destrez writes (p.54):

This approach to decoration (reserved designs defined by the surrounding penwork), is also used in the major decoration of the Sées Missal; here is just one example: 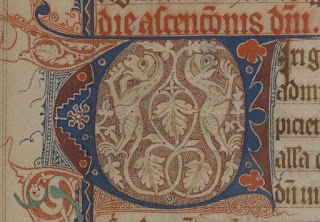 Here are a few examples of the same technique being used in other English manuscripts (chosen more-or-less at random, by searching the BL catalogue of illuminated manuscripts, for manuscripts attributed to England, the 14th century, and with "penwork"): 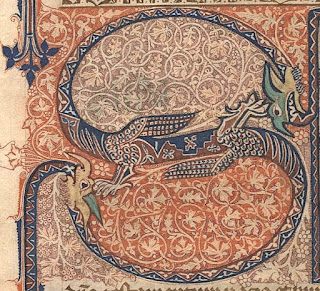 The example from Waltham Abbey also shows the technique being used to create a historiated initial, in this case a Tree of Jesse (unfortunately the BL website does not provide a higher resolution image, but one can just about discern Jesse at the bottom, various prophets and kings to the sides, and the Virgin and Child at the top). This is conceptually comparable to several initials in Sées Missal, such as the one, for the Christmas mass "Puer natus est", depicting the infant Jesus in the manger: 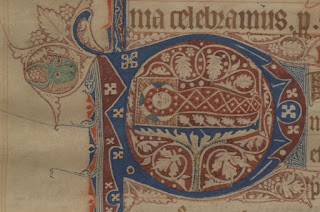 I repeated the search of the BL illuminated manuscripts database, but for manuscripts attributed to France instead of England, and I got results like these:
None of the search results have reserved designs, except for one; it is attributed to "England or France":
Based on the initial I would suggest that it is English (and it was certainly in England by the early 16th century).


So, I end with an appeal to readers: can closely comparable decoration be found in French manuscripts, or are there other good reasons to suggest that the Sées Missal is not "English"?
Posted by Peter Kidd at 17:20