Here are some other details from other miniatures in the same manuscript [descriptions can be found here, with a link to full digitisation]: 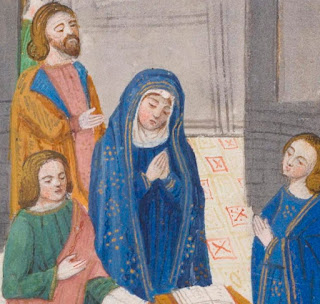 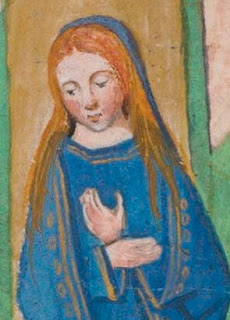 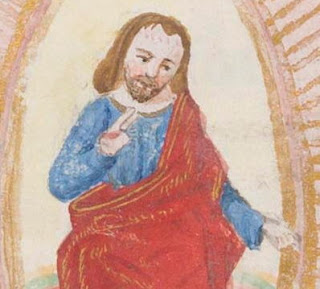 Medieval illuminators were of course capable of producing badly painted miniatures, and it is usually much harder to date and localise low-quality art than high-quality art. While I do think that the miniatures above are "wrong" (i.e. substantially re-painted, probably in the 19th century), I fully accept that I may be mistaken, and that they may in fact be wholly genuine. I feel more confident about the next manuscript.

On the same day I wrote a follow-up message:


"Most of the small historiated initials in Wellesley MS 29 also look "wrong" to me. I always say that if illumination looks wrong, it is either Spanish or a fake, and in this case, some of images, such as the knight in armour (attached) feel more like the Spanish Forger than real Spanish, to me!

Both MS 27 and MS 29 had the same previous owner, which may be significant."

My comment that "if illumination looks wrong, it is either Spanish or a fake" was meant as a joke, but there is some truth in it. When I see illumination that seems "not quite right", one explanation is that it is not medieval, but another is that it is simply painted in a style with which I am unfamiliar -- perhaps Spanish.

Here is the image of the knight in armour that I attached to my second email:
Although much finer than the miniatures in Wellesley MS 27, this looks even more obviously 19th-century to me. There are some initials and miniatures in this manuscript that are perfectly genuine, but a whole series of historiated initials seem to me to embody the same 19th-century Gothic Revival aesthetic as found in the work of the well-known "Spanish Forger" [Wikipedia].

Although presumably not by the Spanish Forger himself, the knight above reminds me of the knights who populate many of his works, such as these, to give just three examples out of very many I could have chosen: 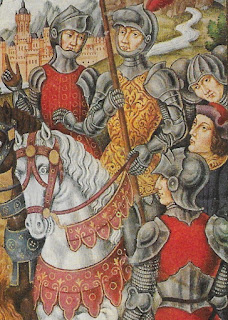 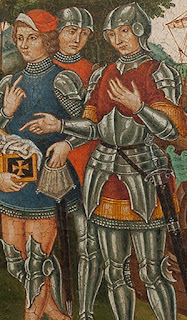 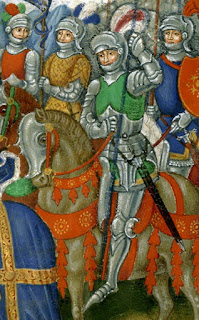 In Wellesley 29 there are also sweet-faced damsels with flowing golden tresses, aristocratic ladies, and queens, engaged in such unlikely activities such as playing the psaltery: 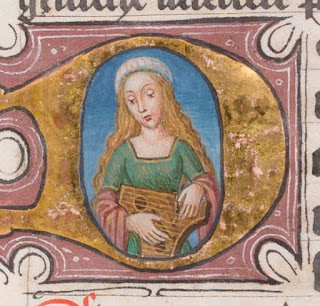 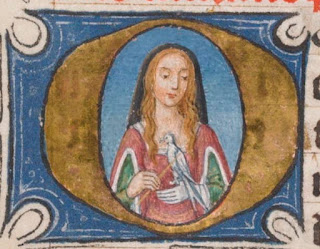 or posing as a demure saint (but lacking a halo): 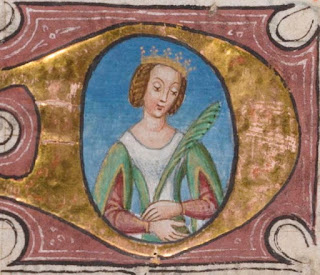 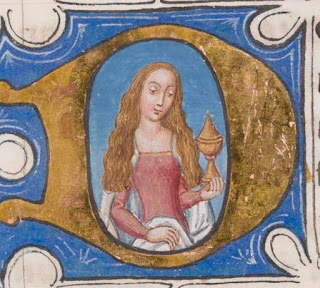 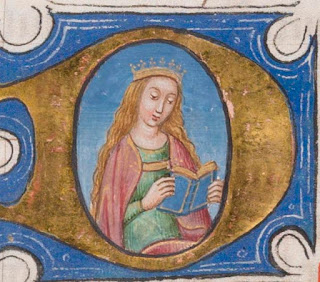 The male figures include a young man, dressed in Italian(?!) costume: 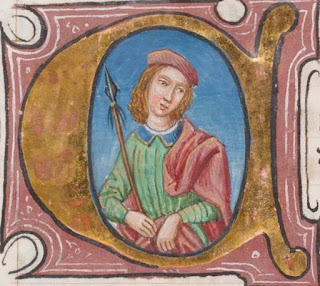 and, of course, the knight (St George?) in golden armour: 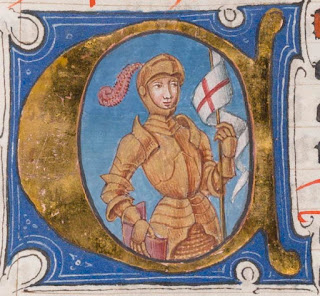 Not only is the style of the images "wrong", but their context is often also bizarre. The stylishly-dressed young man introduces Compline in the Hours of the Virgin: 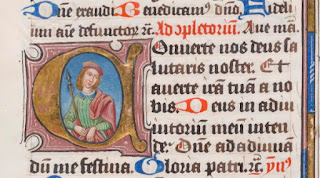 while the woman with a hawk on her gloved hand introduces prayers read "ante ymaginem pietatis", so its iconography could hardly be more inappropriate!: 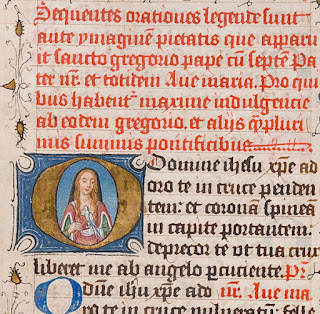 A woman with a hawk on her white-gloved hand, incidentally, is a subject used at least once by the Spanish Forger: 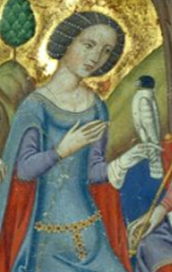 The style of all the small initials from Wellesley 29, shown above, is nothing like the style of the larger, genuine, one: 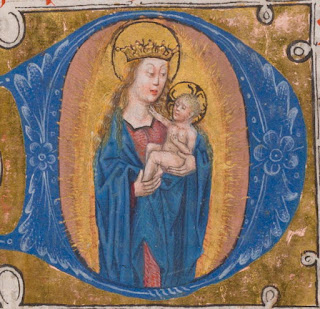 The painter of the miniatures of Wellesley MS 27 is characterised in the 2016 exhibition catalogue [2] thus:


"Although his miniatures reflect some knowledge of atmospheric Flemish manuscript painting of the third quarter of the fifteenth century, his compositions are for the most part simplified interpretations of such models, his figural style is somewhat wooden, and his physiognomies formulaic and lacking refinement." (p.154)

I cannot disagree with this. The lesser painter of Wellesley MS 29 is summarily dismissed:


"All the remaining historiated initials are by a second painter, whose hand is not otherwise known." (p.163)

I more-or-less forgot about these manuscripts until last week, when I saw a Book of Hours in a private collection. Although the script, borders, and initials are 15th-century, the miniatures look decidedly 19th-century, as I hope these details demonstrate: 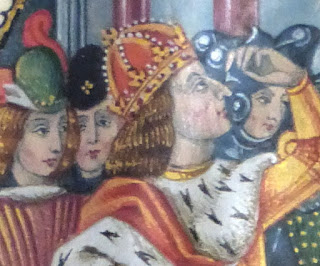 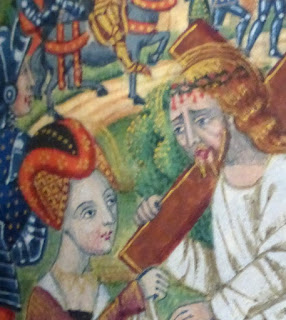 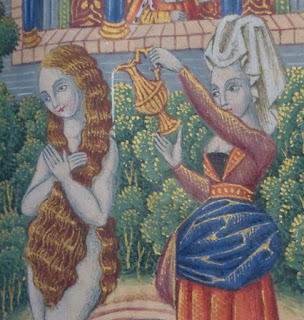 and, what especially caught my eye were the depictions of soldiers and their armour, which reminded me of the gold-clad knight in the Wellesley manuscript: 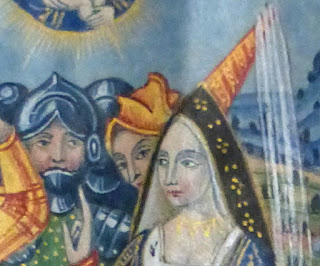 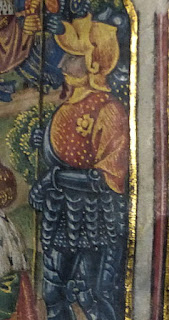 I subsequently found that this manuscript is included in William Voelkle's exhibition catalogue devoted to the Spanish Forger [1], listed under "Other related forgeries" (his no. "OM 4" on p.67 and figs.292-93).

As mentioned above, the two Wellesley manuscripts share a common provenance: they were both given to the College in 1959, so it is worth noting that if some of the miniatures in these manuscripts are indeed modern (or at least extensively re-painted in modern times), as I suggest, they are at Wellesley today because they were received as gifts, not because former Wellesley curators or librarians were fooled by them.

But what I only learned as a result of my most recent post, is that Wellesley MS 27 and the manuscript now in a private collection were both offered by Leo Olschki as nos. 25 and 39 in a catalogue of manuscripts in 1910 [3].

It is always easier to recognise forgeries after a significant period of time has elapsed, but it is interesting to see how Olschki perceived them a century ago. Of Wellesley 29 he wrote:

and of the Hours in a private collection:


UPDATE 29 July 2019
William Voelkle has kindly contacted me and expresses an opinion about the Wellesley manuscripts:

So it seems that my suspicions were justified.