The Date of Wellesley MS 29

In a previous post I considered the weird initials added (in the 19th century, I believe) to Wellesley MS 29, a manuscript that has previously been dated "s. XVex/ XVIin", or "c. 1500", presumably partly on stylistic grounds, and partly due to a calendrical diagram on fol. 13r, which has the year "1500" written above it, using the medieval forms of arabic numerals (shown above).


Such diagrams are not uncommon, often appearing in pairs: one for finding the Dominical Letter [Wikipedia] and whether or not it is a Leap Year; the other for finding the Golden Number [Wikipedia]. They both appear in the Wellesley manuscript, underneath the "1500":
The explanatory text in the centre of the upper diagram ends "... incipe numerare ubi signum crucis inveneris":

and in the upper right quadrant of the upper diagram is a cross-shaped marker, highlighting "xxvi" (the 26th year of the 28-year Solar Cycle [Wikipedia], which forms the outer circle of the diagram); and "c." (among the Dominical Letters, which form the inner circle):
It seems logical that when the manuscript was written, it was the current year that would be indicated in this way. But the year 1500 was a Leap Year, and thus had two Dominical Letters, E and D, not the C highlighted on the diagram. 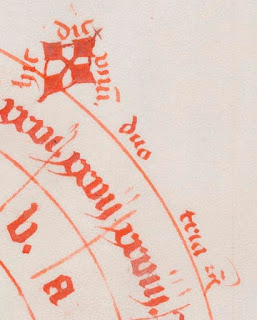