For about 20 years I have wanted to solve a puzzle concerning a bifolium from a grand Pontifical, later used as binding-waste. This week I had a breakthrough. 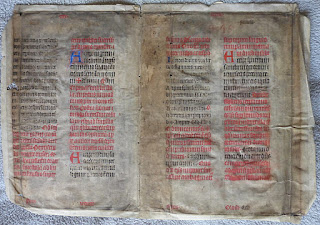 One side of the bifolium is shown above, and the other below. It is substantially complete, though creased and somewhat damaged (as binding waste almost invariably is), yet impressive due to its large size: about 39cm high by 57cm wide, the ruled space of the text in two columns of 21 lines being about 25cm by 18.5cm. 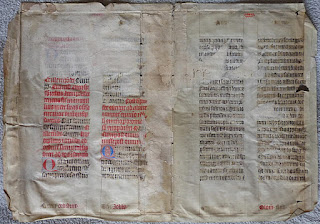 The script is high grade and of high quality, and the decorated initials are fine:

Each page has an original foliation in red ink in the upper margin in roman numerals, and below the foliation is a running heading in flaked black ink, "Pars prima":

The folio numbers are ".xxxv." and ".xxxviii.", from which we can deduce that this was the next-to-middle bifolium of its quire, with just one bifolium (fols. xxxvi and xxxvii) between them. We can be fairly certain that the parent volume was arranged (as usual) in quires of 8 leaves: the first four quires would be fols. 1-8, 9-16, 17-24, and 25-32, with our bifolium in the fifth quire, fols. 33-40:

What has always puzzled me, however, is what is at the bottom of each page. Each page has a few words alternately in red or black ink: the red is mostly easily legible, but the black has flaked and is much harder to read.

The easiest one to read is on fol. xxviii verso:

The next three are more difficult, but part of each is clear enough: 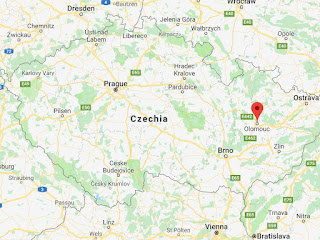 So reading across the bifolium we provisionally have:

Browsing images from the BVMM website this week I encountered for the first time the so-called Liber viaticus (Prague, National Museum Library, XIII A 12; digitized here) of John of Neumarkt, who was Chancellor of Emperor Charles IV, Bishop of Litomyšl from 1353 to 1364, and from 1364 until his death in 1380, Bishop of Olomouc [Wikipedia].

Every double-page opening of this manuscript has in the lower margins an inscription in formal gothic script, in alternating words of red and black: 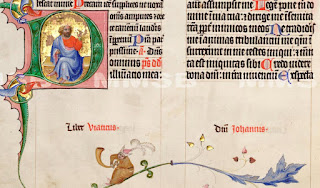 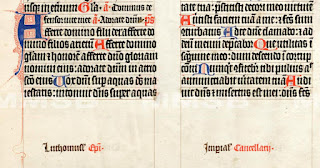 These inscriptions are precisely comparable with those on the Pontifical bifolium. The Liber viaticus must have been made when John was bishop of Litomyšl, from 1353 until 1364. If we compare the script and penwork initials of John of Neumarkt's the Liber viaticus with the script and penwork initials of the Pontifical, it is not hard to believe that they are of broadly similar date, but the latter looks later: 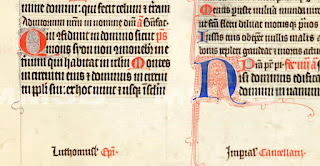 If we now return to one of the flaked words in black ink and look at a close-up:

and enhance the image, we can now read the word as "Noviforen(sis)" with some confidence:

So across the open bifolium we can reconstruct the inscription as:
"Quem. ordinavit.  Dominus. Iohannes. Noviforensis. Olomucium. Episcopus"

The Latin name of John of Neumarkt, Bishop of Olomouc from 1364 to 1380, is Iohannes de Novo Foro, or Iohannes Noviforensis.
Posted by Peter Kidd at 18:28