A Breviary Written at Lucca in 1464 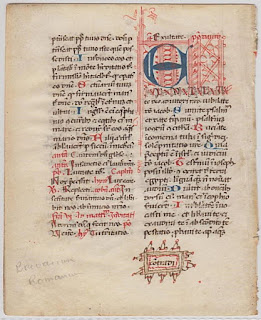 For a few years I have been aware of leaves of a Breviary (of which an example is shown above) which had a colophon with the name of the scribe, and the place and date of completion: Lucca on 22 December 1464. But searches for the terms Breviary, Lucca, and 1464 produce surprisingly few hits for institutional websites: most of the search results are for online dealer listings. I hope this blogpost will make the manuscript better known and lead to new identifications.

I am interested in the manuscript because there are two leaves from it at Vassar College, whose collection I am in the process of cataloguing. They are very small, about 109 × 87 mm, or 4¼ × 3½ inches: 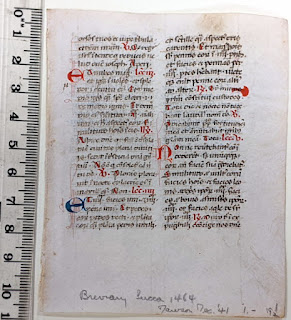 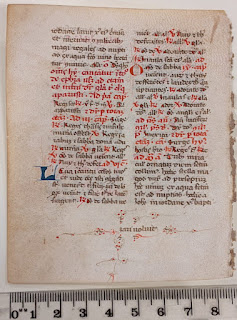 One has a pencil inscription recording its date and place of origin, as well as the fact that it was acquired from "Dawson Dec. '41" for "[$]1.-":

The Schoenberg database record does not cite the Sotheby's sale directly, instead deriving its information from a secondary source, a footnote in M. Manion, V. Vines, & C. de Hamel, Medieval and Renaissance Manuscripts in New Zealand Collections (1989), and this provided the provenance details that it was previously owned by William Ardene Shoults (1839–1887), of London, who bequeathed it to his widow, by whom in turn it was given to Selwyn College, Dunedin, New Zealand, which deaccessioned and sold it at Sotheby’s in 1938. The New Zealand catalogue concludes the manuscript's provenance with its sale in 1938 to "Marks", i.e. Marks & Co., of 84 Charing Cross Road. We can take the modern provenance a little bit further.
Dawson’s Book Shop, Los Angeles (discussed in a blogpost here), offered the manuscript as an intact volume less than two years later in their Catalogue 141: Old Books for a New Year (February 1940), no. 44, mistakenly believing it to be German: “Lucca was a Cistercian Abbey in the Diocese of Minden, once in Brunswick and now a part of Hanover”: 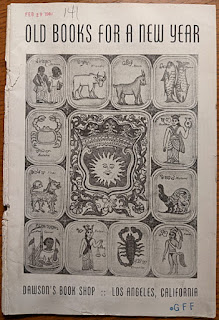 If all 464 leaves were sold for $1 each, Dawson's would have made more than six times as much as if they had sold the intact volume for $75.

Usually, if a dealer breaks up a manuscript with a colophon, he (it is hardly ever a she) makes sure to provide the colophon data with the single leaves, because a date, place, and scribe's name all make single leaves more attractive to collectors. This data is usually recorded by the new owners, and makes their leaves much easier to find online: if one searches for Missal, Beauvais, and 1285, for example, one is quickly led to websites describing the famous Beauvais Missal (discussed in several previous posts, e.g. here). It does not matter that the manuscript probably wasn't made in 1285; what matters is that this is the date used by owners to describe their leaves, because this is what they were told when they bought them.

I do not know why, but it seems that owners of leaves of the 1464 Lucca Breviary have generally not recorded the place and year of production in online catalogues. I am currently trying, for example, to establish the call-number of a leaf in a Canadian university library, but so far this has proved elusive because the library's catalogue does not mention the place or year of production. I know that the library has a leaf, because it was described in an article in 1989 as being "from a Roman breviary of 1464 [...] said to come from the Cistercian Abbey of Lucca [...]".

There are a couple of churches dedicated to San Bartolomeo in the vicinity of Lucca, but I have had no success in identifying the scribe "Karolum de Blanchis de Bardono, rectorem ad p(raese)ns(?) ecclesie Sancti Bartolomei de Lacuna, Lacune diocessis".
Posted by Peter Kidd at 17:49