My impression is that many people who have been on this roller coaster have been very interested in how the apparent copying was originally revealed. I'll give another example here.

In my "Part IV" blogpost I wrote

"[...]  it is notable that Rossi admits that in her book she is quoting the Sotheby's catalogue. And yet she does not cite it as a source." 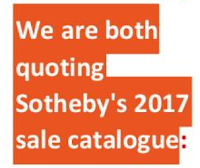 The context was the question of whether the text she was "quoting" (her word) came from a 2017 Sotheby's catalogue, or from my blogpost. The context was not a discussion about where she got the images: this distinction will be important in a moment.

First, the question of whether she cited the catalogue at all. Yes, she did.

Her husband, David La Monaca (anonymous while trolling on Twitter), wrote that:

"The catalogue is cited/quoted at least ten times in the book [...] No trace of Mr Kidd name in the whole catalogue [...]"

Any citation of the catalogue must presumably include the word "Sotheby" or "Sotheby's", but if we search the entire PDF for these search terms we get only six hits, and four of these six refer to auctions in 1954, 2011, and 2015, not the 2017 catalogue that concerns us here:

OK, so Rossi cites the catalogue only twice, not "at least ten times", but let's not quibble. But in both those cases, she is (inadequately) citing the 2017 Sotheby's catalogue as a source of images, not as a source of text that she is "quoting".
Before moving on, let's also address the claim in David La Monaca's tweet above that there is "No trace of Mr Kidd['s] name in the whole catalogue".
As others have pointed out on Twitter, my name appears at the front of the catalogue, between the title-page and the table of contents, under the heading "SPECIALISTS AND AUCTION ENQUIRIES", and "For further information on lots in this auction please contact any of the specialists listed below". I am listed as a Consultant, right under the in-house Head of Medieval and Renaissance Manuscripts: 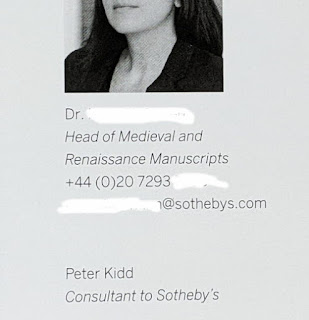 (I'm not reproducing the whole page, as it has the names, images, and contact details of several people unrelated to the current issue).

Thanks to David La Monaca's tweet, and my attempt to verify its accuracy, I decided to look at what Prof. Rossi does say about the source of her images (having repeatedly denied that she got any of them from my blog site). It turns out to be quite revealing. I gladly acknowledge that all of what follows was inspired by an acute observation by @Marphurius on Twitter.

Rossi lists the sources of her images on p. 21 of her book as a footnote [3] to this sentence:

"In applying the WBRM [WayBack Recovery Method] to my search, I have scoured the web in pursuit of every single leaf of the manuscript sold at an auction since the book was dismembered in 2009 [3]."

Footnote 3 starts by listing auctions in chronological order, and then becomes un-chronological at the very end:

I could go through this entire list of auction lots, item by item, but I will concentrate on some of the most revealing.

I provide her text in bold (verbatim), and the equivalent text from my blog list immediately below it:

Note that I misspelled "Pforzheim" with an extra "t", and she made exactly the same spelling mistake. Coincidence?

Note that I mentioned the auction number (Auktion 70), and I listed both the start- and end-dates of the auction (even though it is common practice to only mention the start-date). She does exactly the same things. Coincidence?

Note that there is no city, no auction number, no day of the month, and no lot number in her version, exactly as in mine. Coincidence?

I can explain all these features of my version because when I downloaded the image file in 2009, I re-named it "Reiss 2009 10 lot 845". The "2009 10" suggests that the sale was in October, but the metadata of my image file shows that it was created on 4 August, which potentially contradicts an October sale-date. When I wrote my blog text a decade later, in December 2019, I was unable to verify the details, so I put in a "?"

Note that she has omitted lot 48. This might be because I listed it separately, right at the very bottom of my page, or it might be because Hartung & Hartung apparently did not send her an image of this leaf of the manuscript.  The pixel size of my image of lot 48 is 357×500, and hers is 357×500.  Coincidence?

Note that she does not supply any details such as a city, catalogue date, or lot number, exactly the same as my version.  Coincidence?

That wording looks similar, doesn't it? Maybe it's just a coincidence.

Here's another very suggestive detail. When I contacted RECEPTIO in the week before Christmas, the person who responded from Prof. Rossi's email account forwarded to me two email threads between Rossi and the German auctioneers Hartung & Hartung. The emails were a request from Rossi for images, and Hartung's responses, with a total of 10 black & white images attached.

What I find interesting is that, in her original request for these images, Rossi listed the auctioned leaves in this order: 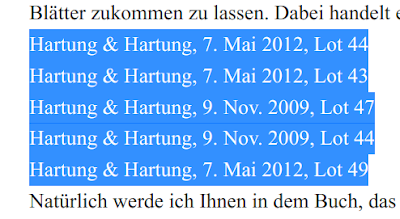 One last little detail: Rossi ends her email to Hartung by saying (in German) 'Of course I will thank you publicly in the book I am about to publish.':

But searching the PDF of her book shows that she only thanked "Hartung & Hartungt" [sic] in the captions of two images: the original folios 30v and 45r. Why would that be? It could be because, for the other eight ex-Hartung manuscript leaves, there is an alternate source of images in colour: my blog site.
Coincidence?
Posted by Peter Kidd at 14:55