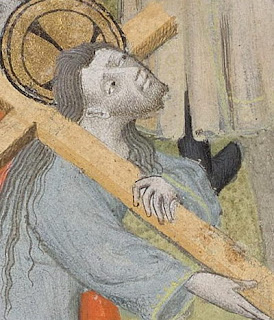 I have written twice (in 2015 and again in 2016) about a series of miniatures (which have been attributed to Jacquemart de Hesdin [Wikipedia]), cut from a very interesting early 15th-century Parisian Book of Hours with unusual (unique?) prayers in French.

Their first appearance was as the property of the late Miss E.M. Ranshaw [1] in a rather uninformative three-line description in the catalogue for Sotheby's, 9 February 1943, lot 106:

Their subsequent history was traced by Lisa Fagin Davis in her unpublished description of the cuttings now at the MFA, Boston (quoted at length in my 2016 blogpost). One of the miniatures whose whereabouts was still unknown in 2016 came to light and was published in 2018, and I have just found two more, so it seems worth laying out the provenances of these.
Lisa records that three joint buyers at the Ranshaw sale in 1943 sold four leaves to Francis Springell, and these were re-sold in the Springell sale of "Important Old Master Drawings" at Sotheby’s London on 28 June 1962, lot 48. I take up the story from there.
The four miniatures were bought by "Martinson", presumably a dealer acting for (or possibly a nom de guerre of) Fielding Lewis Marshall and his wife [2].
The dispersal of the Marshall collection a decade later was a strange affair. The collection was the subject of a special exhibition in the Main Galleries at Sotheby's from 31 December 1973 to 8 January 1974, with a substantial catalogue comprising 89 pages of text and (an unprecedented?) 120 full-page plates. 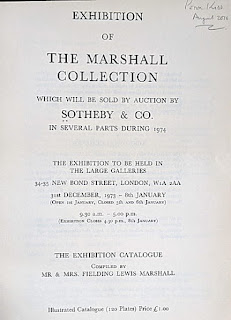 There was clearly tension, however, between the Marshalls' own opinions of their pictures, and Sotheby's. The printed catalogue states on the front cover and title-page (shown above) that it was "Compiled by Mr. & Mrs. Fielding Lewis Marshall", and there was also a disclaimer on the verso of the title-page:

There must have been agreement that Sotheby's would conduct the sale, as the title-page states that the company would auction the collection during the course of the coming year: 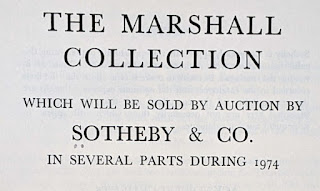 The agreement must have fallen apart soon after, however, because within three months the sale was being conducted by Bonham's, a rival London auction-house: 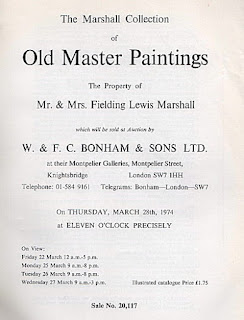 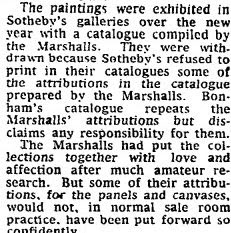 A press photo archive includes an image of the Marshalls attending the sale, and the accompanying caption states "The works have been valued at £750,000 despite the fact that experts have hotly contested the authenticity of some of Mr. and Mrs. Marshall's favourite items" (emphasis added): 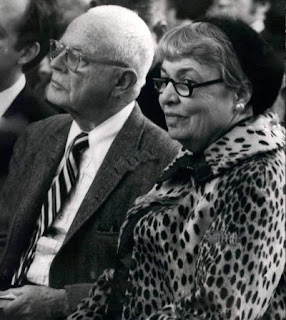 In the event, the sale made less than £300,000. Four examples of attributions that buyers clearly disbelieved were a "Gainsborough", a "Hogarth", an "El Greco", and a "Rubens":

Lots 63-76 were manuscript illuminations, and of these, lots 73-76 were four miniatures from our Book of Hours.
Lot 73 is still unlocated (unles a reader can tell me where it is?), but monochrome images have been published three times: in a 1944 article by Rosy Schilling, in the 1962 Sotheby's catalogue, and in the 1974 Bonham's catalogue: 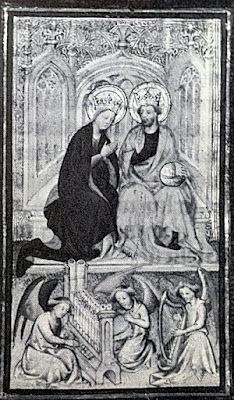 Although the image does not show the act of the Virgin being crowned, I imagine that this is effectively a "Coronation of the Virgin" image, depicting her as Queen of Heaven. It perhaps illustrated the start of Compline in the Hours of the Virgin.
Lots 74 and 75 may have been bought at the sale by, and were certainly later owned by, Stephen Keynes (1927-2017) [Wikipedia] of the illustrious Keynes family (he was a great-grandson of Charles Darwin; nephew of economist John Maynard Keynes [Wikipedia]; son of Sir Geoffrey Keynes, surgeon and author [Wikipedia]; and uncle of Simon Keynes, Professor of Anglo-Saxon at Cambridge [Wikipedia]). They were acquired from Keynes's estate by the Beinecke Library a couple of years ago:

Lot 76 was acquired in 1975 by Michal and Renata Hornstein of Montreal, and then passed to Sari and Norbert Hornstein who have promised it as a gift, in honour of their parents, to the Musée des beaux-arts de Montréal (Inv. 188.2016). It was published in the Catalogue raisonné des livres d’heures conservés au Québec, ed. by Brenda Dunn-Lardeau (Québec, 2018), no. 2: 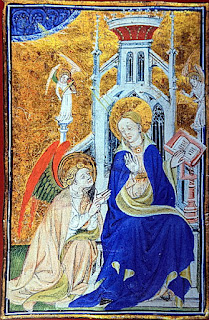 This miniature and the Coronation of the Virgin are by an artist different from the others; the Montreal exhibition catalogue reports François Avril's opinion that their cutting is by the Troyes Master. In the most recent study of the Boston cuttings, Anne D. Hedeman suggests that they should be attributed to the so-called Pseudo-Jacquemart, a collaborator of Jacquemart de Hesdin [3]. I do not feel confident to opine about the attributions, but it does seem that if at least two or three artists contributed to the parent Book of Hours, it would repay further study by someone better qualified than me.
Finally, I should correct -- or at least cast serious doubt on -- a suggestion I made in the 2015 blog post. I argued there that the tall, narrow, format of the miniatures implied that the parent volme was written in two columns, and the miniatures were the width of one column as, for example, in the Belles Heures: 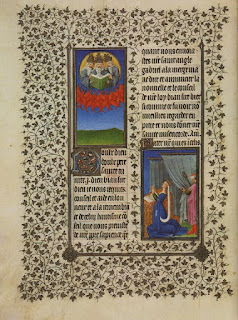 But in this and most other two-column Books of Hours that I know, the colums are only wide enough for an average of three or four words per line, whereas the Boston-Montreal-Los Angeles miniatures (in the three cases where it is possible to see the text on the back) the column is wide enough for four or five words per line. So I now think it likely that the book may simply have been rather small.

[2] Lot 46 in the Springell sale was also bought by Martinson, and was also next in the Fielding Lewis Marshall collection; it is now NYC, Morgan Library, MS M.961.