Arthur Haddaway (1901–1981), of Fort Worth, Texas, is not well known as a collector of medieval manuscripts, although his library included the Hours of Charlotte of Savoy, among others:
He also owned the so-called Hornby-Cockerell Bible: 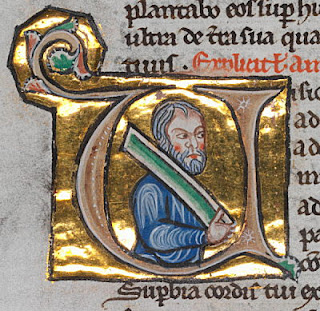 This was broken-up and dispersed by Bruce Ferrini and his associates in 1981; I was able to trace the present whereabouts and/or images of many of the illuminated leaves in vol. III of the McCarthy catalogue [1], but one thing that I was not able to do before the catalogue went to press was to consult the Haddaway Archive at the Grolier Club Library in New York to see if it contains relevant information.

I have just returned from the USA (hence the lack of blogposts for the past few weeks), where I finally had an opportunity to visit the Library. The Archive includes loose-leaf binders in which he kept records of his rare books and manuscripts, usually with a note of the source, date, and cost of each acquisition. In his earlier collecting years he recorded the price openly, but he later used a price-code to disguise the figures.

The four-figure codes (here in alphabetical order) include:

And the few five-figure codes are:

As mentioned above, Haddaway was from Texas, and it was not hard to guess that his code word was GALVESTON. Some corroboration of this comes from three items  which he bought from Bernard Quaritch catalogues priced in dollars:

Haddaway's notes record that the Hornby-Cockerell Bible was bought for "GTXXX" from Harry A. Levinson, who offered it in a catalogue for $17,000; this confirms that G=1 and T=7.

Thus I think we have ample evidence that:

One coded price looks very out of place in the list above -- it is one of only a few that does not end in X or XX, and apparently represents a price of $10,817: "GXOGT". This item was bought in 1980 from Dawson, who offered it in a catalogue at £4,500, which suggests a currency conversion rate of about £1 = $2.40. This seems about right: this website suggests that the exchange rate in 1980 for the US dollar against the pound sterling varied from about $2.13 in April to $2.45 in November.
[1] My catalogue entry (McCarthy Collection, III, no. 15) benefitted from an excellent detailed study of the Bible: Eric J. Johnson, ‘Breaking and Remaking Scripture: The Life, Death, and Afterlife of the Hornby-Cockerell Bible’, Manuscript Studies: A Journal of the Schoenberg Institute for Manuscript Studies, 4.2 (2019), pp. 270–333 [availabe as a PDF from here]. I am grateful to Eric for various kinds of help with my work on the manuscript, including providing me with scans of the Levinson catalogue description.
Posted by Peter Kidd at 11:19