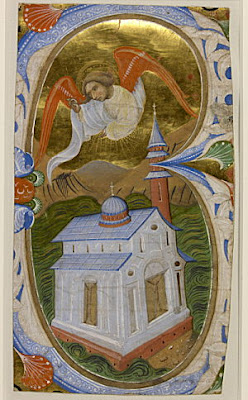 As regular readers will know, I have been interested in the so-called Master of the Murano Gradual for several years, despite knowing very little about Italian illumination. My interest in locating the surviving examples of his work perhaps go back to about 2014, when I first started to get interested in the 1838 Ottley sale (e.g. here), which included several. From 2016 I began to pass relevant images and bits of information such as auction-catalogue references to Stephanie Azzarello, who was doing her PhD on the artist and his manuscripts, and to Bryan Keene, who was also interested in the artist, as I had no intention of doing anything serious with the material myself. They have now collaborated on two articles published in the last few years:

Stephanie Azzarello and Bryan C. Keene, ‘Splendors of the Serenissima in a Digital Age: The Master of the Murano Gradual Reconsidered’, Manuscript Studies: A Journal of the Schoenberg Institute for Manuscript Studies, 6.2 (2021), 223–67 [1]

The second of these appeared very recently, and as it includes the most extensive list of the cuttings from the Murano Gradual, with their provenances, it has prompted me to sort through my miscellaneous notes, and I intend to blog a series of observations and thoughts, with a few corrections, additions, and questions, in the hope that they will also contribute to future studies.

One "correction" (if I am not myself mistaken) concerns the iconography of a cutting now at the Musée Cluny in Paris, shown above.

It was one of two cuttings bequeathed to the Museum in 1843 by Alexandre Du Sommerard (1779–1842) [2], archaeologist and art collector [Wikipedia]. Aside from the cuttings in the Ottley sale in 1838, these are the cuttings with the earliest known post-medieval provenance; it would be interesting to know where, when, and from whom he acquired them.

The two cuttings were included in the first catalogue of the Museum in 1847 [3], prepared by its Curator, Edmond Du Sommerard (Alexandre's son), as nos. 800 and 801:

The subject of the first of these cuttings was not recognised in 1847, being simply described as a "Sujet légendaire", but was identified in 2004 as the Miracle of the Crucifix of Beirut [4]: a story recounted in the Golden Legend, in which a representation of the crucified Christ began to bleed when pierced by some Jews, who were thus converted to Christianity: 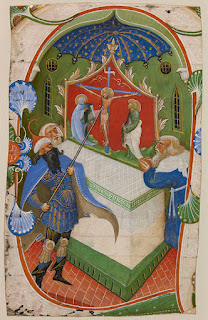 The second Cluny initial was identified in 1847 as "La Santa-Casa", i.e. the Holy House of Loreto. According to later medieval legend, the house of the Virgin Mary in Nazareth was miraculously transported to Loreto, on the Adriatic coast of Italy, in the 13th century. [Wikipedia]
Azzarello and Keene accept this identification of the scene [5] but I doubt it, for several reasons. It seems to me far more likely that the image represents the Apparition of St Michael at Mont-St-Michel.
Not only does it show an angel appearing above the building: 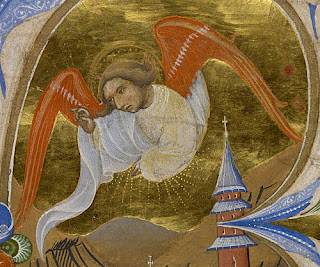 ... but the building itself seems to be surrounded on all sides by a sea of green waves, except for a causeway of sand and pebbles at the lower right: 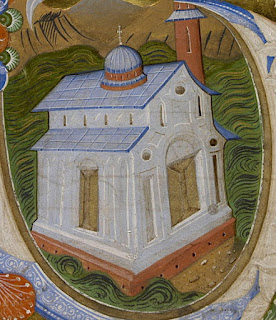 Here is a modern view, showing the causeway that gets covered and uncovered as the tide rises and falls: 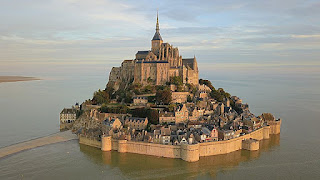 Undoubtledly the most famous representation of the Apparition in a manuscript is that in the Très Riches Heures: 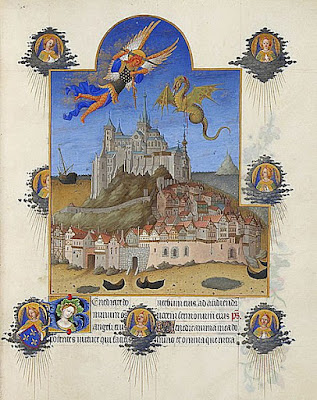 The scene is not commonly depicted in medieval manuscripts, however, and it may seem surprising that the Murano Gradual should have had two images of St Michael: the other is now at the Morgan Library:
But this is easily explained by the fact that both feasts were very popular and often highly-ranked in the liturgy of medieval churches, and by the fact that one of the two Camaldolese houses in the Venetian lagoon was dedicated to St Michael: San Michele, Murano. By contrast, the 10 December feast of the Miracle of the Holy House of Loreto was relatively obscure, and I have found no evidence that it was important in the liturgy of the Camaldolese Order [6].

Re-reading the post above, I realise that I make the assumption that the reader knows that there were two feasts of St Michael, but perhaps this needs explaining. The feast of the Apparition of St Michael was on 8 May, and was usually less important than his 29 September feast, which commemorates the dedication in the 4th century of the basilica of San Michele on a hill near Rome. Curiously, it is only the  feast of the Apparition that gets a historiated initial in the Camaldolese Gradual at the V&A, and it is illustrated with Michael defeating the dragon (Revelation 12:7-9): 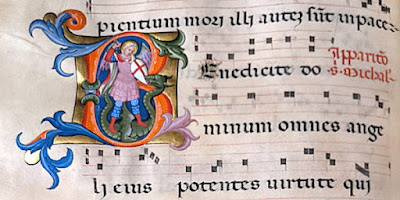 [1] Azzarello, S. (2021). Reassembling the Sacred: The Murano Master and the Illuminated Choir Books of Camaldolese House of San Mattia di Murano (Doctoral thesis). https://doi.org/10.17863/CAM.77059. I have not had the opportunity to read this yet, as it is embargoed until September, but for the purposes of this blog I assume that the more recent publication in Manuscript Studies represents Stephanie and Bryan's most up-to-date opinions.

[6] This last comment may need revision after I have made a more extensive search, but the 10 December feast seems to be absent from the earlier Camaldolese manuscripts described by Mirella Levi D’Ancona, The Choir Books of Santa Maria Degli Angeli in Florence (2 vols, Florence, 1993-94), and also from both the later printed Camaldolese Missal (Venice, 1503) and Breviary (Venice, 1514).

Update, 20 Feb. 2022: The 10 December feast is also absent from the late 14th-century Camaldolese Gradual at the V&A.