In a post almost a year ago I mentioned that one of the most interesting things about a cutting at the LA County Museum of Art, is what the text on its back tells us about the parent manuscript.

I was recently able to see the four sister cuttings at the MFA, Boston, and a Conservator there kindly relaxed the hinge of the Entombment miniature (43.215) for me, so that the reverse can now be seen and photographed more easily. 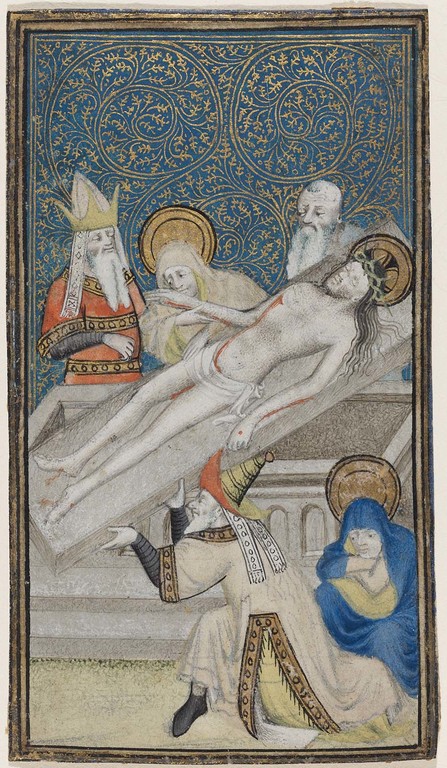 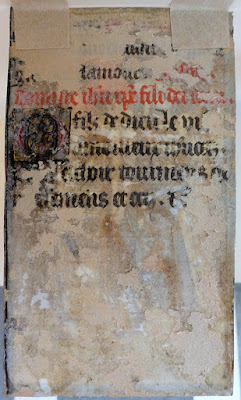 The text is not easy to read, even in this somewhat enhanced photo, because the miniatures used to be pasted-down to a card backing, not all of which has been removed, but I think I can discern the following:

The Latin rubric and the following line in French suggest that this prayer is a French verse translation of a Latin prayer beginning "Domine Ihesu christe fili dei vivi". The Latin incipit is not uncommon, but I have not been able to identify the French version, which means that, like the text on the LACMA cutting, it may possibly be unique.

The provenance of the Boston cuttings was traced by Lisa Fagin Davis in her unpublished catalogue of the MFA's medieval manuscripts. Summary descriptions based on her work are available online, but these unfortunately omit many details of her work; with her permission I quote from the more detailed version, written in 2003 (which concerns all 16 of the cuttings discussed in my previous post):


"The sixteen miniatures were sold at Sotheby's London, 9 February 1943, lot 106, to Raphael Rosenberg, art historian Grete Ring, and Arthur Kauffman. The three co-owners sold four leaves to collector F. Springell; those four were sold at Sotheby’s London on 28 June 1962, lot 48. Ring and Kauffman each kept four. The four Ring leaves may have passed to her executor, Marianne Feilchenfeldt of Zurich. Three of the Kauffman leaves are still owned by his family – one was sold early on to Alfred Scharf, but is no longer owned by the Scharf family. Raphael sold his set of four to his brother, Saemy Rosenberg of the New York firm Rosenberg & Stiebel, who sold them to the MFA in 1943. The whereabouts of the remaining miniatures are unknown. Two miniatures that were almost certainly part of the Hours of the Cross in this manuscript, The Agony in the Garden (Matins) and the Crucifixion (Nones), were not in the Ranshaw group and have never been identified."


The Nativity miniature, acquired by LACMA in 1947, is therefore one of those previously owned by Arthur Kauffmann (1887-1983) or Grete Ring (1887-1952). By chance, just yesterday I encountered it in a 1953 exhibition catalogue, where it is stated to have been given to LACMA by the Hearst Foundation:

[1] I owe the reading of the start of "[es]choir" to Anne D. Hedeman, who is writing the entry on the MFA cuttings for the forthcoming Boston-Cambridge exhibition catalogue.
Posted by Peter Kidd at 08:24