The Hours of Philip Ringstone

Looking through old photos taken on a visit to Bristol Reference Library I came across my pictures of their MS 11. 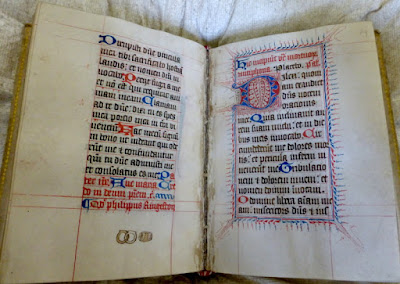 As one turns the pages, one in due course reaches the Office of the Dead, and immediately preceding it, a note by the scribe in red "Quod Philippus Ringeston" and a rebus consisting of two interlocked rings and a tun (rings + tun = ringston):

In the often-overlooked 'Glossary of Words Used in References to Books and Ownership', near the back of Neil Ker's Medieval Libraries of Great Britain (London, 1964), pp.326-31, he explains that:


"When quod and a personal name are written at the end of a text, as often in late-medieval manuscripts, the person named is probably the scribe"

Not in this case, however; we find out more about Philip later in the manuscript: 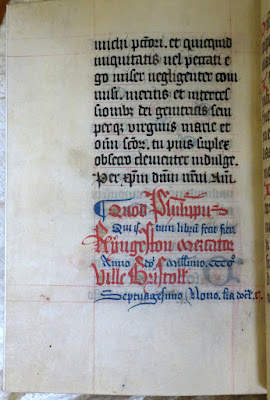 He is described as a merchant, not a scribe (although a merchant would also have known how to write), and he did not write it, but had it made: 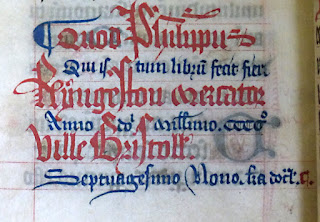 That our Philip moved in these circles is confirmed by other added inscriptions in the volume. In a margin of the litany is the name "George Snigge": 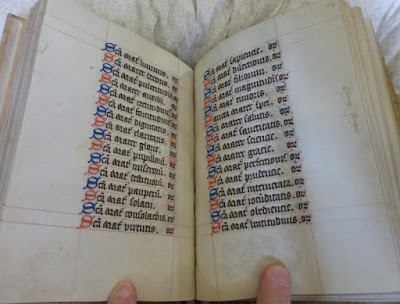 That the name is here spelled "Snigge" not "Singge" is confirmed by other inscriptions, such as the records of the births of "Thomas Snyg" and "George Snyg", the first two sons of John Snyg, on 2 September 1509 and 9 September 1510: 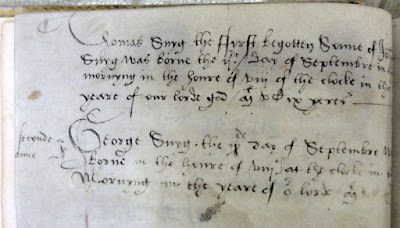 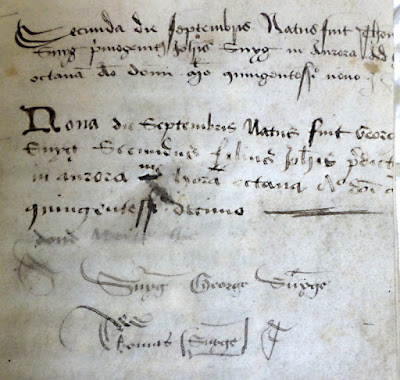 A Thomas Snyg is recorded as a Sherrif of Bristol in 1501, and a George Snigge was Sherrif in 1556 and Mayor in 1574. When Philip Ringston's widow died she made a bequest to Agnes Snyg, wife of John Snyg, mercer.

Perhaps with his rising social status Philip Ringston upgraded to a more elaborate Book of Hours and passed the present book on to a member of the Snigge/Snyg family; it contains no rich pigments or gold, and the only figurative decoration occurs in one or two decorative catchwords: 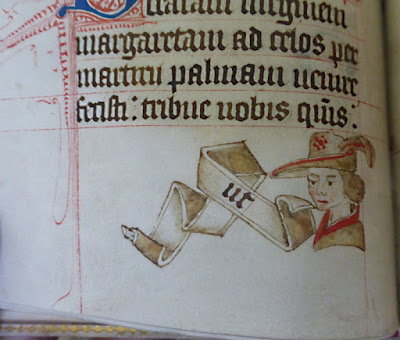 ------
My thanks to David Shaw, who spotted that I originally omitted one of the "C"s from my transcription of the date; this has now been corrected.
Posted by Peter Kidd at 08:11