The Pontifical of Michel Guibé [I] 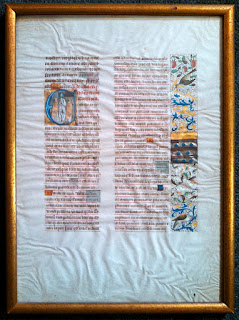 In 2007, after a day in spent looking at illuminated leaves and cuttings at the Princeton Museum of Art, I walked past a general antiques shop and noticed a framed leaf of a late 15th-century French illuminated manuscript in the window.

I have not been back to the shop since then, but it looks as if one of these leaves, in its simple gold frame, was still hanging inside the window of the shop as recently as August 2017, when Google StreetView captured these images :

I went in and chatted to the owner, who revealed that he had a second leaf from the same manuscript, and he let me photograph them both (badly). One is shown at the top of this post; here is the other: 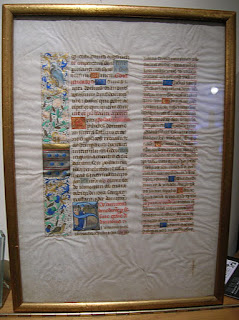 When I got home to England the following week, I spent a little time trying to identify the arms that appear in the margins, thinking that it would not be too hard, because scallop shells, coquilles, are a relatively uncommon charge in heraldry, and the gold crozier behind the square shield suggests we are looking for an abbot or bishop, which narrows down the search significantly: 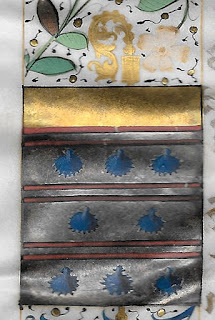 I got nowhere with the heraldry, and more-or-less forgot about the leaf for the next ten years.

In December 2017 Bill Stoneman sent an email with the exciting news that several medieval illuminated manuscript leaves and cuttings had been discovered at the Houghton Library, amongst a collection of unrelated material. One of them is this:
It reminded me of the leaves in Princeton, and on closer inspection I became confident that it is from the same manuscript. The Houghton leaf does not have the heraldry of the Princeton leaves, but it does have other very strong evidence for its provenance. 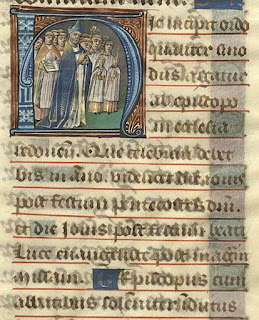 Thus, this is an ordo for a bishop of Rennes ("Redonen[sis]" in the rubric), in Brittany: 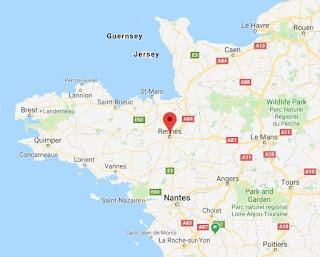 The underlined liturgical directions are followed immediately by a litany of saints, and this confirms the Rennes origin by its inclusion of rare saints such as Melanius (6th-century bishop of Rennes, to whom a the monastery of St-Melaine in the city is dedicated), Armagillus (6th-century founder of St Armel-des-Bocheaux, near Rennes), and Gobrianus (7th-8th-century bishop of Vannes, south-east of Rennes): 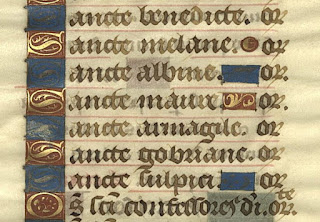 We encountered the same three saints in the calendar of a Rennes Breviary now in New York, in this post.

I find Wikipedia to be extremely unreliable for anything relating to medieval manuscripts, but it can be very useful for lists of things; in this case, a list of the bishops and archbishops of Rennes:
Not surprisingly, the French version of the page is much more detailed than the English one:
and in the list of bishops there is even a column depicting their heraldry. We know from the style of illumination that the manuscript is from the final decades of the 15th century, and thus we immediately see that the bishop of Rennes from 1482 to 1502 bore the arms that are depicted in its borders: 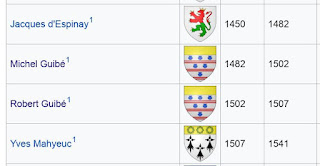 (Based on the heraldry alone, the manuscript could have been made for Michel's brother, Robert, who succeeded him as bishop of Rennes and bore the same heraldry, but I don't think the illumination can be as late as 1502.)

In the next post we will see what else we can find out about this manuscript, and about its owner, Michel Guibé, to whom a whole wikipedia article is dedicated.
Posted by Peter Kidd at 11:35