Cuttings by the Monza Master [I] 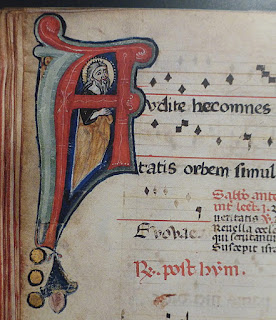 In the past few weeks the first volume of the catalogue of the McCarthy collection has been published [1]. The collection includes a series of 19 cuttings from a volume of Lives of Saints illuminated by the so-called Master of Monza, and the catalogue lists 27 more cuttings in other collections, making a total of 46. Two of the 46 should not be on this list, however, and two other ones should be.

Before making additions to, and subtractions from, the recently published list, it may be worth summarising the evolution of the cuttings' attribution, as the history of scholarship is somewhat complex: 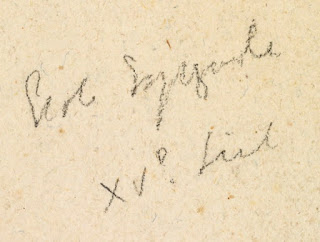 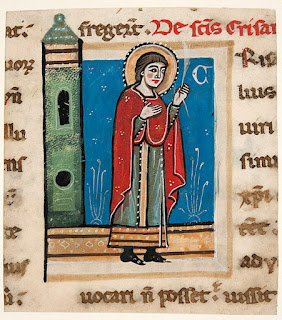 In 2011 I helped catalogue two cuttings in the Arcana collection, for their sale at Christie's [9], and observed that the text on their backs is from the collection of saints' lives by Bartholomew of Trent. In 2016 I wrote a blog post in which I observed that the initials in the Cracow choirbook were not integral, but were pasted-in (I was unaware of the fact, as apparently were most other people who wrote about the cuttings, that this had already been noticed [10]). It follows from this that the date and localisation of the choirbook is perhaps unrelated to the date and localisation of the illuminated initials. I also suggested that the choirbook cuttings are from the same series as the loose cuttings of saints, and that a loose cutting in the Frascione collection (which I have not seen) is also probably from the same series, and not from "a further broken-up choirbook". The number of known volumes to which the artist contributed was therefore reduced from three, to one: all the known initials and miniatures are probably from a single illuminated collection of saints' lives.

Earlier this year, Christopher de Hamel re-examined the question of their date and localisation [11], largely accepting my proposals, and adding some thought-provoking new ideas:
If this last hypothesis is true, then it would mean that Robert Forrer had accurately attributed the style of illumination as far back as 1901!

In the next post I will address the issue of the corpus of cuttings that can be attributed to our artist.


EDIT 31 Dec 2018
Unable to read Polish, I had not previously attempted to translate in full the 1953 description of the Cracow  manuscript [12]. With the help of Google Translate, I now see that the fact that the initials are cut from another manuscript and stuck in was realised from the beginning (the manuscript was acquired in 1951):


The manuscript itself is unadorned. All the initials contained in it were barbarically cut along the outer contours of some undoubtedly Lombard manuscript, dating back to around 1300, and glued in those places where the needs of the antifonary text required it.

[10] A. Sobańska, "Antiphonary of the Ambrosian Liturgy", in The Jagiellonian Library: A Bibliophile's Treasure House (Kraow, 2011), cat. no. 8.

[11] C. de Hamel, The Medieval World at our Fingertips: Manuscript Illuminations from the Collection of Sandra Hindman (Chicago, 2018), cat. no. 3.