I do not usually stray into the realm of Byzantine manuscripts but I make an exception today. Three full-page miniatures of the Evangelists were offered by Les Enluminures, Catalogue 7 (1998), nos. 14a, b, c; the one depicting St Luke is now at The Met Museum (shown above, and online here).

In the just-published first volume (covering Italian and Byzantine items) of the catalogue of the McCarthy Collection of illuminated leaves and cuttings, no. 86 describes the other two miniatures, of Sts Mark and John: 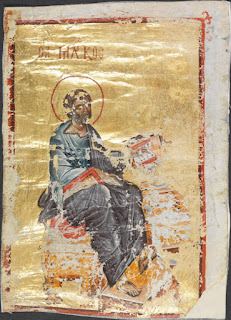 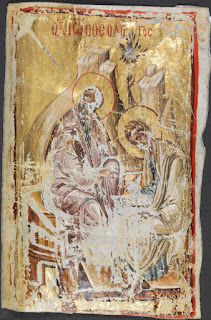 The McCarthy catalogue provides no provenance prior to their ownership in Le Havre by Jacques Augustin-Normand (1839–1906), but the bilingual Les Enluminures catalogue does. In the first description, in French, it is stated that

The English version is not merely a direct translation, but includes some extra details:

I contacted Les Enluminures, but they no longer had the evidence (presumably a clipping from a sale catalogue) on which this statement was made; it might have been passed to one of the new owners of the miniatures.

In a previous post we encountered miniatures illuminated by William de Brailes in the 1897 auction catalogue of Pierre Gélis Didot:
In this catalogue, lot 27 is a set of Byzantine Evangelist miniatures:

While I think there can be no doubt that the source available to Les Enluminures in 1998 was a clipping from this catalogue, it is not so clear whether this auction catalogue entry refers to the McCarthy-Met miniatures. The incorrect date is an error that is easy to understand when it comes to Byzantine miniatures; and a slight difference in dimensions is also easily explicable (different people rarely get the same dimensions when measuring the same manuscript); but the auction catalogue twice states that there were four miniatures present, whereas Les Enluminures only had three, and the fourth, depicting St Matthew, has since been identified, still in the parent volume (reproduced in the McCarthy catalogue).

One possible explanation, therefore, is that the owner of the McCarthy-Met leaves in 1897 saw the Gelis Didot catalogue, and took a clipping from it as a record of the current price of Byzantine Evangelist portrait miniatures. This does not particularly help elucidate the provenance of the McCarthy-Met leaves, but it suggests that they may have been removed from their parent volume before 1897, and were probably already in the collection of Jacques Augustin-Normand of Le Havre.
Posted by Peter Kidd at 21:41