The Pontifical of Michel Guibé [II]

Having identified the patron of the Pontifical of Michel Guibé, it quickly became apparent that he is rather well known as a patron of liturgical manuscripts. There is a 2001 monograph devoted to another of his manuscripts, a Pontifical-Missal including the ordo for the coronation of the Dukes of Brittany, now in the Archives de l'évêché de Rennes: 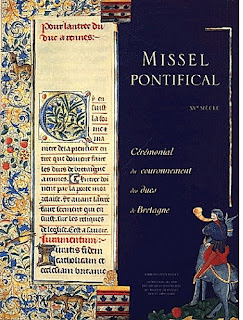 This has only 25 lines per column: 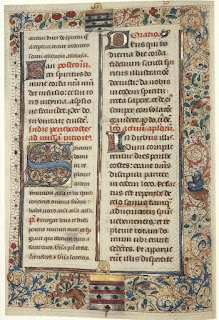 The single leaves at Princeton and Harvard, discussed in the previous post, have 30 lines per column, which gives the text a very different overall appearance: 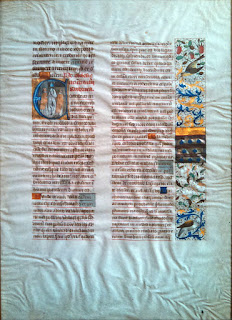 It is from this overall appearance that I recognised another leaf, reproduced in Phillip J. Pirages, Catalogue 54 (2007), no. 9: Here the text is for the consecration of a portable altar, and in the historiated initial we see a priest at an altar, asperging a portable altar with crosses in its corners and centre.

I recently found two more leaves, now in the collection of the Seattle Art Museum; doubtless two of the most important leaves from the parent manuscript. One has the text for the consecration and ordination of a bishop, surrounded by full, wide, borders, incorporating Michel Guibé's arms at all four corners (a detail  of the initial is at the top of this post):
The other leaf has narrower borders, and the arms only appear once, but it has two historiated initials, introducing the preface ("Per omnia secula seculorum ...") and the Canon ("Te igitur ...") for the consecration Mass:
The underlined liturgical directions in the image above show that this comes from a consecration Mass, not the more general Canon of the Mass as found towards the middle of most Missals: "Et dicet dominus consecratus Te igitur cle(mentissime) cum consecrato simul et semel ...", and on the verso, at the end (not beginning) of the "Communicantes" prayer is a rubric "Pro consecrato infra actionem".

Four leaves of what I think must be the same manuscript (although described as Benedictional -- a different type of book, but also made for the use of a bishop) were included in a catalogue for a Sotheby's sale on 13 December 1965, as lot 173:

"Four illuminated leaves from a Benedictional written for a Bishop of Rennes, double column, 30 lines, ... (353mm. by 250mm.) ... The arms of the Bishop for whom the manuscript was written appear twice, surmounted by a pastoral staff, in the borders of one leaf."

It is very likely that one of these leaves is the Harvard one, because the man who gave it to the Houghton Library, who owned very few western medieval manuscripts, bought other lots from the same Sotheby's catalogue.

We therefore seem, so far, to have collected images of six leaves, including three in institutions, and written evidence recording the existence of three more, a total of nine leaves:

The Seattle Art Museum's Rights and Reproductions Department requires that "All reproductions of Photographic Material will be accompanied by the following credit information as specified in Schedule A: collection, accession number, photographic material, artist, date, medium, size, credit line, photo credit." So, in accordance with those requirements, here are those data: