Quires From a Rennes Breviary, now in New York 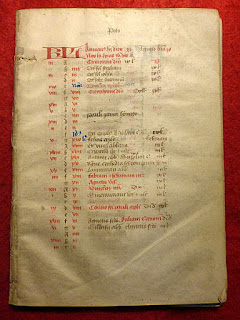 On a recent Saturday in New York I visited the Public Library and examined a few manuscripts that were - understandably - not considered sufficiently beautiful or interesting for inclusion in the 2006 Splendors of the Word exhibition.

One of these was a 12-leaf portion of a Breviary, described as follows in the 1962 Faye and Bond Supplement to de Ricci's Census:

In addition to not suggesting a date or place of production, this brief description is wrong on at least two counts. The first six leaves contain a calendar, and the second six contain the end of the Canticles, a litany of saints, petitions, and part of the Common of saints, ending imperfectly. Thus the latter does not come from a psalter, and cannot be the last quire of the original volume.

The description in Digital Scriptorium is considerably more precise, suggesting an origin in France in the late 15th century.

Further clues to the origin of the manuscript are some of the feasts highly graded in red:
and some of those in plain ink, each graded with at least 9 lessons:
The feasts on 16 May and 6 November give us the necessary confidence to expand the place-name in the dedication feast on 3 November: "red'" = "redonen'" = Redonensis, i.e. Rennes.

The litany includes Ivo, Melanius, and Armagillus among the confessors.

If the place-names mentioned above are plotted on a map, it can be seen that they ring the (present-day) limits of Brittany:

The recent provenance is recorded in a loose note dated May 24, 1938: 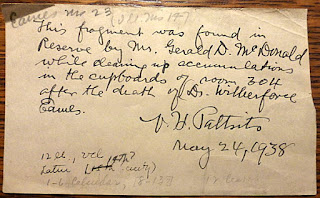 "This fragment was found in
Reserve by Mr. Gerald D. McDonald
while cleaning up accumulations
in the cupboards of room 304
after the death of Dr Wilberforce
Eames."