The Herbert Bier Archive at the Wallace Collection 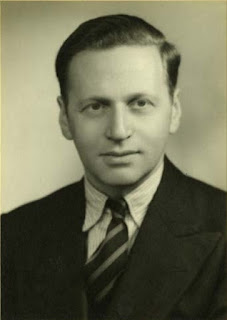 The Wallace Collection in London is, among other things, a centre for the study of provenance, with a regular evening seminar on the History of Collecting, but until recently I had never used the Library, which owns the archive of the Jewish art dealer Herbert Bier (1905–1981), who emigrated from Germany to London in 1938.

The Archive consists of five main types of document:
Numerous medieval leaves and miniatures passed through Bier's hands, often part-owned with other dealers. As an example of how the Archive can be used to elucidate the recent provenance of such items, I give two examples below, leaves from the same manuscript.


In 1917 Alfred Chester Beatty bought an incomplete early 15th-century Parisian Book of Hours and extracted its 12 miniatures; he exchanged, gave, or sold seven of them in 1931; and the remaining five were sold after his death, in 1968.

Here is a fairly typical Bier Stock Card, for one of the miniatures that Chester Beatty had disposed of in 1931: 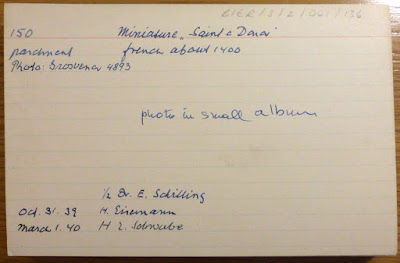 At the top left is the stock number, "150", below this the medium and a note of a photo negative number; in the top right corner is pencilled the modern Wallace Collection archive reference; top centre is the title and attribution, "Miniature, Saint & Donor, French about 1400"; in the centre of the card is another note "photo in small album".

The more interesting provenance information is in the lower left corner:

On the reverse of the card are the financial details: 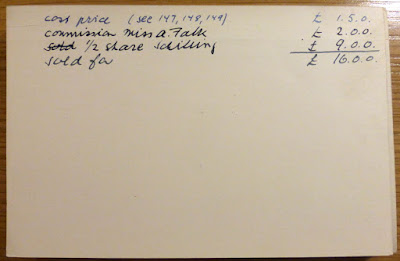 Stock nos.147–149 are three other miniatures from the same manuscript.

The corresponding item in the photo album is annotated with several of the same details found on the stock card: 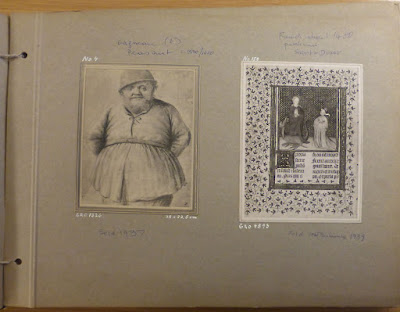 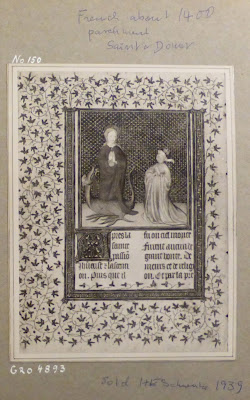 To the left in white above and below the photo are the stock number and negative number; above is the title and attribution; below is "Sold [to] H E Schwab 1939".

This miniature is now at Princeton Museum of Art:

At the posthumous Chester Beatty sale on 3 December 1968, five leaves with miniatures were sold as lots 23A–E: all but one were sold to Maggs, apparently on behalf of John Goelet. The fifth, lot 23D, depicting a Funeral Service, was bought by Bier.
A week after the sale, on 9 December, Goelet wrote to Bier from New York, the start of a correspondence preserved in the Archive: 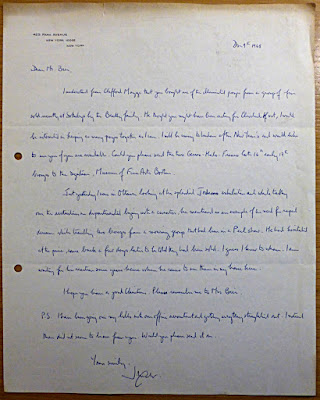 "Dear Mr Bier,
I understand from Clifford Maggs that you bought one of the illuminated pages from a group of five sold recently at Sotheby's by the Beatty family. He thought you might have been bidding for Cleveland. If not, I would be interested in keeping as many pages together as I can. [...]" 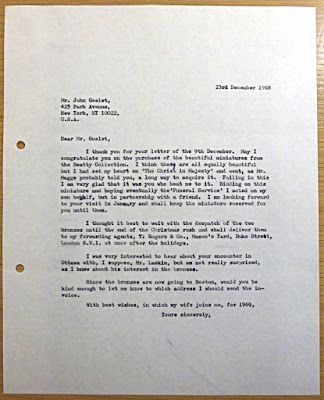 "Dear Mr. Goelet,
I thank you for your letter of the 9th December. May I congratulate you on the purchase of the beautiful miniatures from the Beatty Collection. I think that they are all equally beautiful but I had set my heart on 'The Christ in Majesty' and went, as Mr. Maggs probably told you, a long way to acquire it. Failing in this I am very glad that it was you who beat me to it. Bidding on this miniature and buying eventually the 'Funeral Service' I acted on my own behalf, but in partnership with a friend. I am looking forward to your visit in January, and shall keep the miniature reserved for you until then. [...]"

The correspondence then shows that Goelet visited Bier in London in early February, and bought the leaf for £2,800. The reverse of Bier's Stock Card reveals that he owned only a ⅓ share: another ⅓ was owned by "Mrs. F. Scharf", and ⅓ by "Dr. A. Kauffmann", so each share cost £733.6s.8d. When Bier sold the leaf to Goelet for £2,800, therefore, the three part-owners made a profit of £200 each.

Goelet instructed Bier to send the invoice to his agent in New York for payment, and to send the leaf itself to the Museum of Fine Arts, Boston. Bier wrote to each of them; this is one of his letters to Boston: 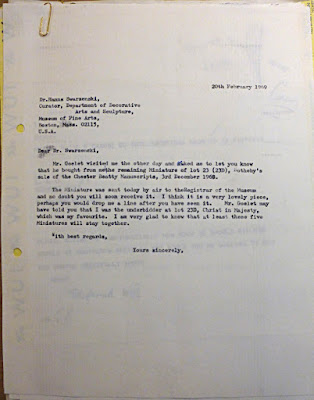 "Dear Dr. Swarzenski,
Mr. Goelet visited me the other day and asked me to let you know that he bought from me the remaining Miniature of lot 23 (23D), Sotheby's sale of the Chester Beatty Manuscripts, 3rd December 1968.

The miniature was sent today by air to the Registrar at the Museum [...] I am very glad to know that at least these five Miniatures will stay together. [...]"

In fact, although Goelet acquired all five of the leaves sold in 1968, they did not stay together; only one was given to the MFA, and the other four were dispersed: one is said to be in a private collection in Germany; one is said to have been destroyed in a fire in 1988; the whereabouts of one is unknown to me; and one is in the forthcoming Sotheby's sale on 7 July.

I am grateful to The Wallace Collection for permission to use my photos of items in the Archive.
Posted by Peter Kidd at 08:20