Smith College, Massachusetts, is the most recent institution to join the Digital Scriptorium consortium. It has digitized 10 medieval manuscripts in their entirety and added them to the site.

I visited Smith for the first time last November, and wrote one post as a result, but have always intended to do more. Here I return to my notes on MS 291, a mid 13th-century Psalter.


It has one fine historiated initial, shown above. One of its other interesting features is that it preserves a protective textile curtain (apparently original, or at least medieval): 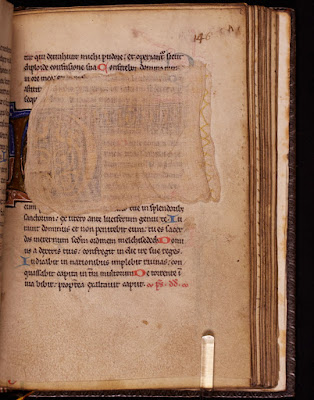 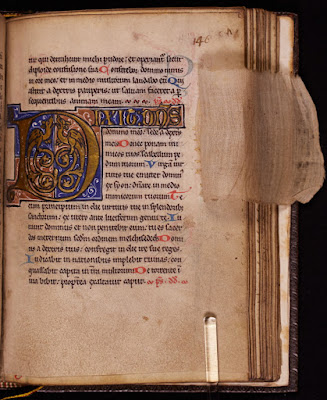 There is currently only a very brief description online, so it may be useful to first describe the textual contents (the calendar leaves are not numbered; the rest of the book is paginated, not foliated, and p."127" is repeated):
In the calendar the following entry stands out in red:

6 Feb.: Vedasti episcopi [&] confessoris, i.e. Vedast (alias Vaast), bishop of Arras and Cambrai, whose relics were at the abbey of St-Vaast, Arras.

Among the entries in ordinary brown ink is the "relatio" of Vedast (15 July), a feast that is rare outside Arras:

13th-century additions, in a paler ink, include:

There is ample evidence in the calendar, therefore, to associate the book with the city or diocese of Arras in northern France (Cambrai is less than 25 miles south-east of Arras): 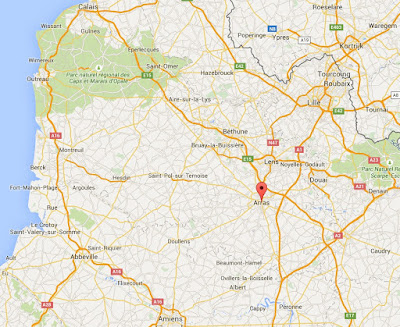 The Litany of saints points in the same direction. Among the confessors we find several of the same saints, including Vedast, Amatus, Autbert, and Vindicianus.

But it is notable that only one saint, Judoc, has his name written in larger script, with the "S" of 'Sancte' also written larger, and in two colours, and with the "or" (short for 'ora pro nobis') written in red: 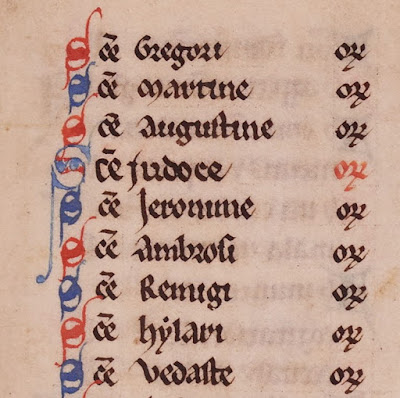 The centre of the cult of Judoc, alias Josse or Jodocus, was the Abbey of St Josse which, from 1161, was at Dommartin, to the west of Arras:

As far as I have been able to ascertain, Dommartin was in the diocese of Arras in the 13th century.

As mentioned above, the "O intemerata" is written for a female supplicant:
It therefore seems that the original owner of the Psalter was a laywoman who lived in the diocese of Arras, probably not far from Dommartin, but the Office of the Dead is of the Use of Paris, and the calendar also has a number of feasts by the original scribe suggestive of a Paris origin, including:
The presence of St Francis (4 Oct.) proves that the calendar was written after his canonization in 1228; the writing is 'below top line', suggesting a date no earlier than about the 1230s; and the style of script and decoration suggest a date in the 1250s or 1260s. The prominence given to a prayer of St Nicaise (p.240) may suggest that it was written after the building of a church of St-Nicaise in Arras in 1254.

There are a few clues as to the identity of the original owner, such as the selection of saints venerated in the prayers. In 1640 it was owned by someone who wrote on the final page: 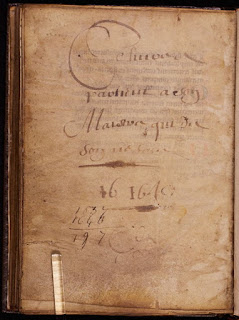 
The Psalter was mentioned by Lisa Fagin Davis on her blog, with an excellent high-resolution image taken by Martin Antonetti.
Posted by Peter Kidd at 07:39