The name "Ormesby" immediately suggests to any manuscripts specialist the Bodleian Library's wonderful Ormesby Psalter (MS. Douce 366), apparently given to Norwich cathedral by Robert de Ormesby in the first half of the 14th century. But there were at least two other men named Ormesby, and there are at least two other manuscripts inscribed with that name, that belonged to Norwich cathedral in the same century.

One is reasonably well known: Cambridge, University Library, MS Kk.4.3, is a 13th-century volume containing several glossed Old Testament books. It has a Norwich Cathedral press-mark "G.xxxiij" and an inscription recording its gift by W. de Ormesby, rector of St Mary in the Marsh, Norwich:


The image above comes from Sydney Cockerell's magisterial study of the Ormesby Psalter [1], which has ensured that this manuscript has not been overlooked in the subsequent literature, and it has recently been catalogued by Stella Panayotova [2].


"9 (II.2). C.xj Radulphi de fretinham monachi. Norwich Cathedral, 1.
Bartholomew Cotton's chronicle, s. xiii ex. The press-mark and inscription are reproduced in Luard's edition of Bartolomew Cotton (Rolls Series, 16).
At the end of the manuscript is the mark 'C. xix' and the name 'Ormesby'."

In the absence of any other explanation for the presence of here the name, it appears to be a note of ownership. Many Norwich Cathedral books have the name of their donor next to the press-mark, and so it is probably significant that the name appears adjacent to a standard Cathedral press-mark, "C.xix."

The situation is complicated by the fact that the name and press-mark here appear at the back of the volume, rather than on the first leaf, which would be the normal place. At the beginning of the text we find a slightly different press-mark, and a different name:

Ralph doubtless came from Frettenham, about 6 miles north-east of Norwich.

A late 13th-century genealogical roll of the kings of England in the British Library (Add. MS. 30079) has Fretinham's name and the shelf-mark "C xii": 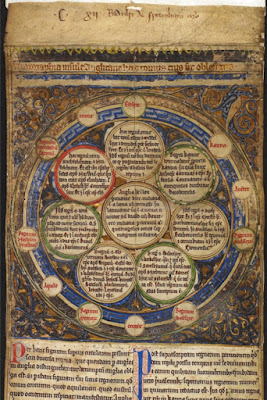 A third book given by Fretinham is Cambridge, University Library, MS. Kk. 4. 20, with the Cathedral press-mark "C. iii".

We cannot at present know which Ormesby is meant by the inscription in the volume of Bartholomew Cotton's chronicle, but it is likely to be either "W. de Ormesby", rector of St Mary in the Marsh, who gave the glossed books of the Bible now in Cambridge, or Robert Ormesby, who gave the Ormesby Psalter, now at the Bodleian.