The 13th-Century Bibles from Norwich

Almost exactly four years ago I posted a reference to an unidentified Bible from Norwich Cathedral, which I found in an 1899 auction catalogue:

In the process of making additions to the new edition of N.R. Ker's Medieval Libraries of Great Britain (about which there will be a future blogpost) I realised that "Clingham" (which I had not been able to identify, and does not appear to be a place-name), must be a mis-reading of "Elingham". Ellingham is about 15 miles south-east of Norwich: 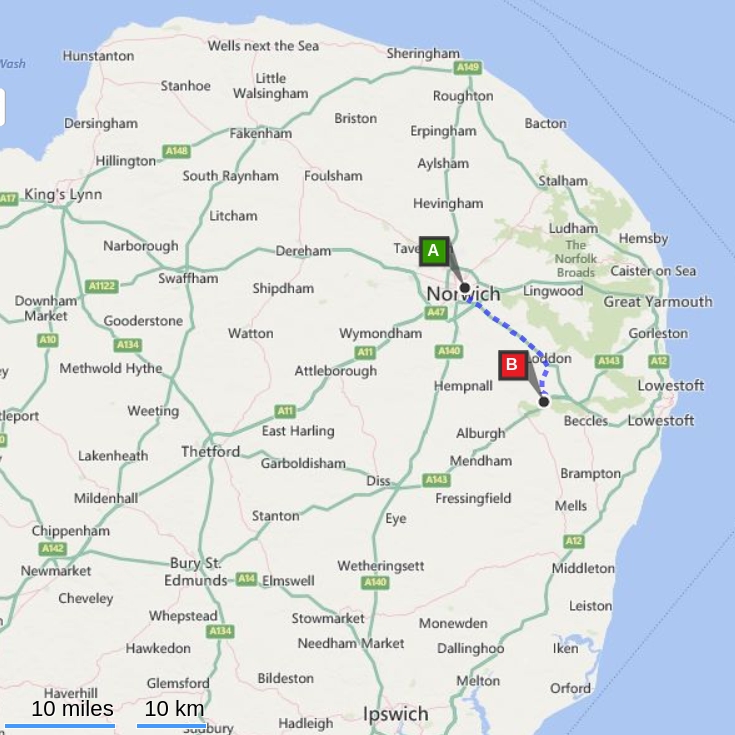 Ralph of Ellingham (Radulphus de Elyngham) is recorded as Cellarer of Norwich cathedral in 1272, 1278–80, and 1283, in which role he was responsible for some expenditure on parchment and manuscripts, as revealed by Neil Ker [1]:

The Bible from the 1899 auction is recorded in the same article, and its present whereabouts revealed:

The online description of the manuscript at the National Library of Wales contains some interesting features:


"The running-titles and chapter numbers in alternate red and blue and the small chapter initials in red and blue were executed in Italy; the large initials in divided red and blue at the beginning of the General Prologue and each Book are the work of an English illuminator."

The NLS details the provenance, which I have arranged here as bullet points:

To this I can add a few details:

Ralph of Elingham was Cellarer of Norwich Cathedral Priory by 1272,[2] the year in which its library was destroyed by fire, and the Bible was therefore doubtless given by him as part of the post-fire campaign to replenish the library (it is one of 30 extant MSS listed by Ker as "acquired after 1272 and before c.1325, bearing a press-mark and an inscription of ownership"). Ralph's last appearance in the cathedral records is in 1306/7, at which time he was Sacrist.

The names of the ten early 14th-century magistri, more than half of whom can be identified as Oxford men, strongly suggests that the manuscript was taken to Oxford by a monk, sent there by Norwich Cathedral Priory to study. One possible candidate is John de Mari, a Norwich monk who is recorded as a student in Oxford several times from 1317/18 to 1329/30; is described as "sacre pagine professor" in 1336; and is known to have died in 1343/4. Another candidate is Hervey de Swafham, another Norwich monk who is recorded as a student at Oxford from 1297/8 to 1318/19.

The Edmund Derham who inscribed the book in the second half of the 15th century doubtless came from Dereham (about 15 miles west of Norwich), and is doubtless the same Edmund Derham recorded at the cathedral from 1471/2, who held various positions including Cellarer, Almoner, Chamberlain, Sacrist (responsible for books and vestments), and Prior of St Leonard's, Norwich, one of the cathedral's cells (the latter a post which had been held between 1439 and 1453 by John de Elyngham, possibly a relative of Ralph de Elingham).

Brigadier Carr or his father doubtless bought the Bible because his family home was near Ditchingham, just a couple of miles from Ellingham: 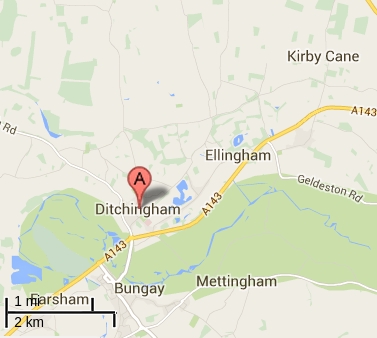 The Elingham Bible is one of only two extant Bibles recorded with a medieval provenance at Norwich Cathedral. Its Norwich pressmark "E.xxiij" (recorded by Ker, see above), suggests that the book stood on a shelf near the other one, inscribed "E.xliij Magistri Ricardi de felningham", which is now Bodleian Library, MS. Auct. D. 4. 8: 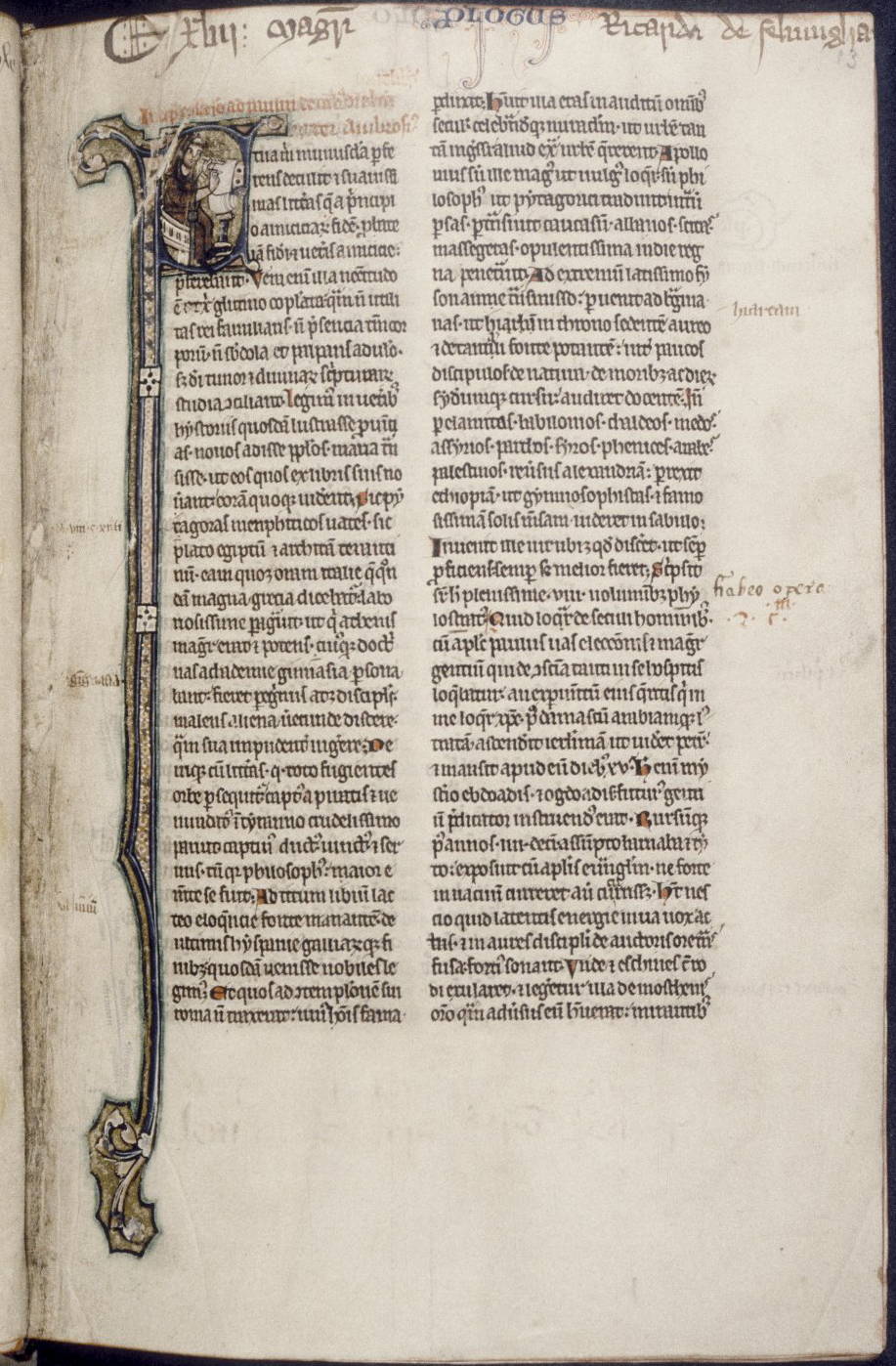 This Bible has some unusual and interesting iconography, including Psalm 101 with a image of a tonsured cleric (intended to represent a Norwich monk?): 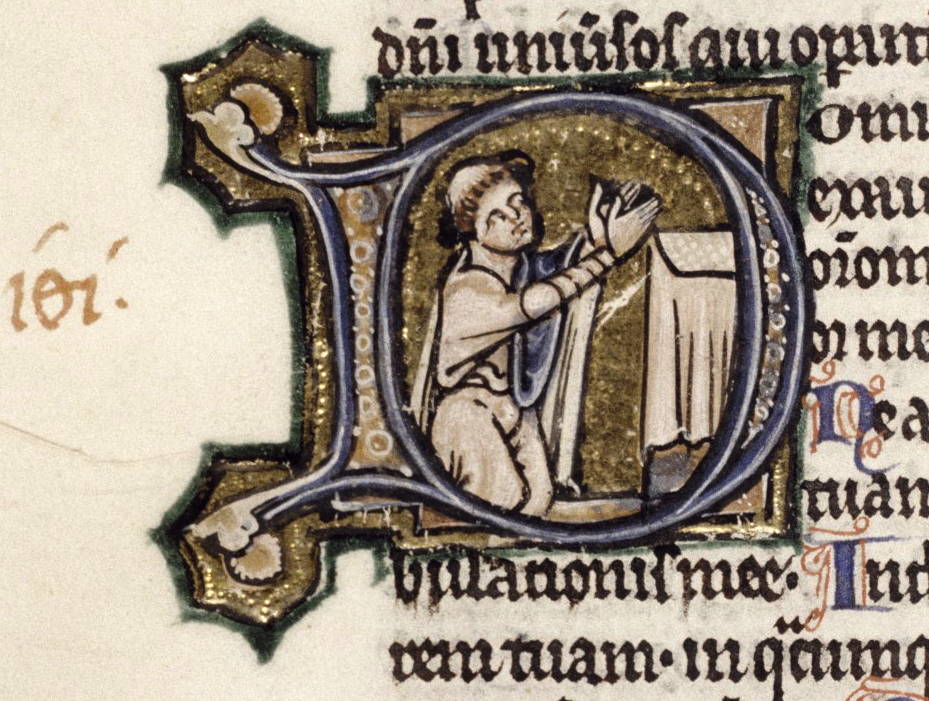 Ecclesiasticus, with a nice depiction of medieval strap-and-pin bindings and half-moon spine tabs: 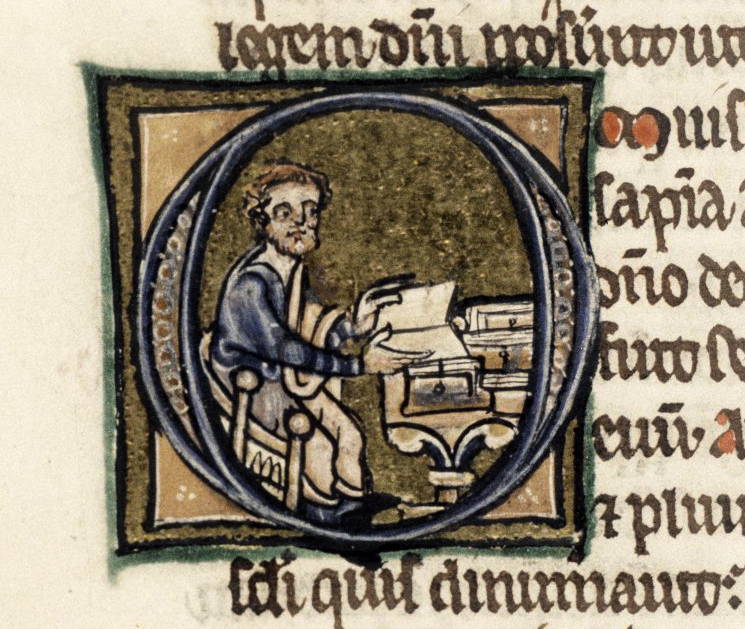 and the Gospels, each with an Evangelist portrait in which the human figure has the head of his symbol, such as Luke with the head of an ox: 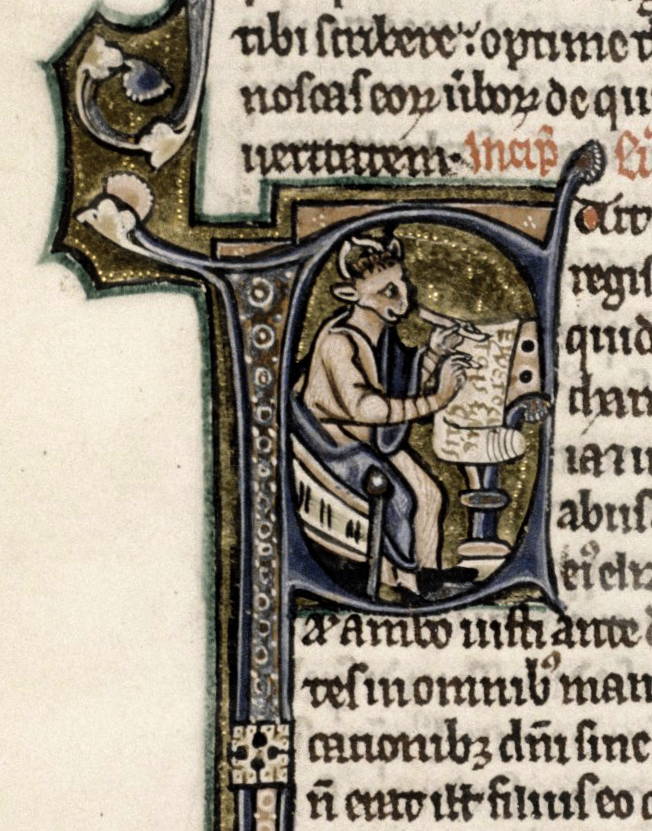 The style and iconography of this Bible is described in some detail by Nigel Morgan, Early Gothic Manuscripts, I: 1190–1250, no. 75; he suggests an East Anglian origin.

EDIT, 6 April 2016
I have just found a photo of the inscription in the Bible that is now in the National Library of Wales:

[1] N.R. Ker, "Medieval Manuscripts from Norwich Cathedral Priory", Transactions of the Cambridge Bibliographical Society, I (1949–50), pp.1–28, as reprinted in his collected essays: Books, Collectors, and Libraries: Studies in the Medieval Heritage, edited by Andrew G. Watson (London, [1985]), pp.243–72. Ker's extracts from the Norwich documents are reprinted, with aditional notes and in a different order, by Richard Sharpe (ed.), English Benedictine Libraries: The Shorter Catalogues, Corpus of British Medieval Library Catalogues, 4 (London, 1996).
[2] Biographical details come from Ker, op. cit., and Joan Greatrex, Biographical Register of the English Cathedral Priories of the Province of Canterbury, c.1066 to 1540 (Oxford, 1997).
Posted by Peter Kidd at 17:19