The Dispersal of the Collection of Rodolphe Kann [III]: The Illuminations 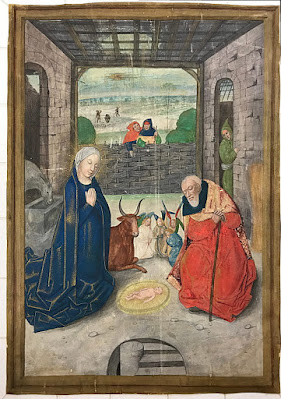 In a post a few week ago we saw that Rodolphe Kann's art collection was inherited by his son, Edouard, and then sold in 1907 to a partnership of Duveen Brothers and Nathan Wildenstein (whose business partner was René Gimpel, discussed here). Rodolphe Kann's illuminated codices may be the subject of a future blogpost (several are now at the Morgan Library), but for now I am interested in the single leaves and cuttings.

These illuminations were sold en bloc to Arabella Huntington, the fabulously wealthy widow of the railway magnate Collis P. Huntington (d. 1900) and future wife of Collis's nephew, Henry E. Huntington. When she died in 1924, they were inherited by her son, Archer Huntington, who in 1930 sold them back to Duveen Brothers.

The Duveens perhaps felt that the early years of the Great Depression was not the time to achieve good prices for frivolous luxury items such as manuscript illuminations, and seem to have kept the Kann-Huntington acquisition in storage until after the end of the Second World War. They then allowed access to William Suida, the Austrian art historian who had emigrated to the US during the War [Wikipedia]. Suida published an article on 'Italian Miniatuire Paintings from the Rudolphe Kann Collection' in 1947 [1], neither mentioning that they now all belonged to Duveens, nor that the collection also contained non-Italian items.

Despite the fact that Duveens chose not to be named as the owners of the illuminations, they were apparently now ready to try to generate interest in the collection: just one year later they lent a Flemish miniature of the Nativity, shown at the top of this post, to an exhibition at the Wadsworth Atheneum, for Easter 1948 [2]. 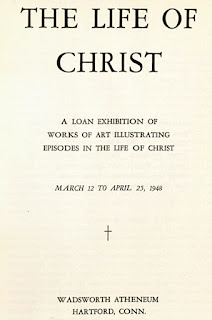 Five years later they publicly revealed even more of their ex-Kann holdings: they lent thirteen of the illuminations to the 1953-54 exhibition of 'Mediaeval and Renaissance Illuminated Manuscripts' at the LA County Museum (discussed in various previous posts including this one), and they were openly named as the lender in the catalogue. [3] The Nativity miniature that had been lent to the Wadsworth Atheneum was used as the colour frontispiece: 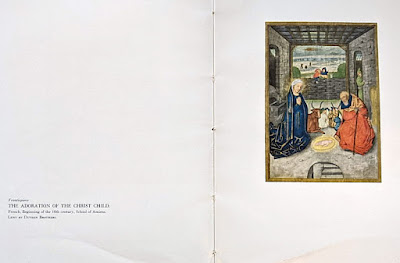 I find it hard to understand why this miniature would have been chosen for the frontispeice, in light of the other outstanding treasures in the exhibition, which makes me suspect that Duveens paid the cost of the colour image.

Considering that the great majority -- but not all -- of the Kann-Huntington-Duveen illuminations were included in the LA exhibition, it is interesting to note which ones were included and excluded.

Kann no. 79 was excluded because it is a choirbook leaf with a decorated inital and border, but no miniature, while Kann no. 84 was included because, despite being from a printed book, it has high quality illumination. Both these decisions seem very reasonable.

Kann nos. 85 and 86 were excluded, because they are obvious (to modern eyes) 19th- or early 20th-century forgeries. William Voelkle attributed them to 'a forger who worked at about the same time, and apparently [deriving compositions] from the same publications, as the Spanish Forger'. [4] Yet Kann no. 87 was included in the 1953-54 exhibition, despite the fact that it too, is (equally obviously) a forgery:

It seems that the ex-Kann cuttings then went back into storage at Duveens for another several years, until they were re-evaluated in 1962. By this time Kann no. 87 had been recognised as a forgery, and it was therefore donated to the Morgan Library, where it is MS M.786b.

At least four ex-Kann historiated initials were sold by Duveens to the art critic Denys Sutton [Wikipedia] in 1963, including this one: 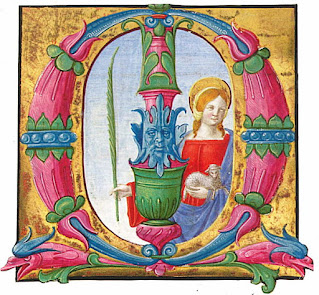 In May the same year, The Viriginia Museum of Fine Arts, Richmond, VA, bought the Flemish Nativity miniature, and a sister-cutting of the Sutton historiated initials: 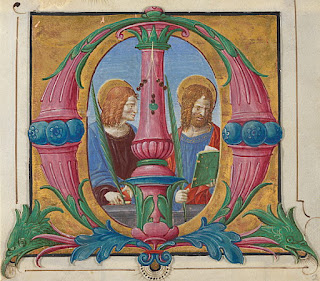 Southern California businessman Norton Simon (1907–1993) established The Norton Simon Foundation in 1952 to administer his family's philanthropic activities, which is now most famous for The Norton Simon Museum in Pasadena (just a 10-minute drive from The Huntington Library, Art Museum, and Botanical Gardens). In 1964 its first major purchase -- the inventory of Duveen Brothers -- included the remaining Kann-Huntington-Duveen illuminations.

Next week will I will attempt provide a complete list of the ex-Kann collection, with images and present locations as far as I have been able to determine them.