The Provenance of a 14th-century Apocalypse in French (BL, Yates Thompson MS 10) 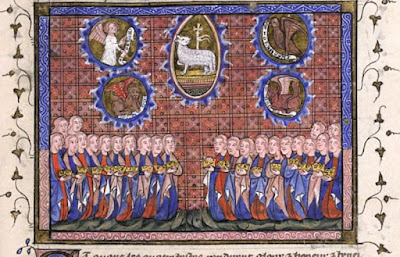 In 2010 I contributed the provenance section to a commentary volume that accompanies a facsimile of London, BL, Yates Thompson MS 10, a  illuminated Apocalypse manuscript written in French with 70 miniatures, datable to about 1360-80, of which one is shown above. [1]

The purpose of this blogpost is to summarise very briefly the provenance as I was able to establish it; to make one correction; and to make one addition.
In summary, the provenance I presented in 2010 was as follows:
The correction I have to make is that the manuscript was not unsold in June 1921 (I probably made this assumption because the manuscript was still owned by Yates Thompson a few years later): according to the BL description, at the 1921 sale it was bought for £800 by Edgar Osborne (1890-1978), antiquarian, and re-acquired by Henry Yates Thompson in 1926.
The addition fills part of the large gap between 1732 and 1820.
The first concrete provenance for the volume is provided by an inscription on a flyleaf, which tells us that it was in the Westerloo sale catalogue, p. 280, lot 51:

This can be easily confirmed; the Westerloo sale took place in Brussels on 12 July 1734: 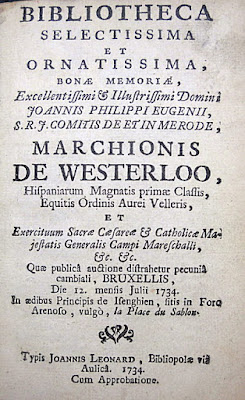 As we can see from the marginal annotation, the price was 36 florins, as originally written on the flyleaf shown in the image above (not 136 florins as someone later tried to suggest). 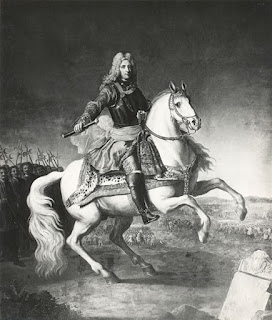 The library had belonged to Jean-Philippe-Eugène (1674–1732), count of Merode, marquis of Westerloo (shown above) [Wikipedia], who was described as:

"full of baffling and yet endearing contradictions. Brave to the point of folly, the Count was also of the most irascible temper, touchy pride and overbearing arrogance – characteristics which continually landed him in trouble of one sort or another throughout his life. A stickler for the least detail of the deadening etiquette so dear to his snobbish heart, and firmly convinced of his superb talents as a courtier, landowner and soldier, he bore lasting jealous grudges against the men whom he considered had ruined his military career … and lost no opportunity to besmirch their reputations, however unjustly, in his writings."

Towards the end of his life, however, his temper mellowed and he concentrated on producing an heir for his properties and collecting a fine library of important books. At about one o'clock in the morning on 12 September 1732, Westerloo died of apoplexy in his library, which, as we have seen, was dispersed in Brussels two years later.
In 2010 I was unable to determine what happened to the MS between the 1734 auction and its reappearnce in an 1820 catalogue of the London booksellers Payne & Foss, but I now think that I have one piece of this puzzle: 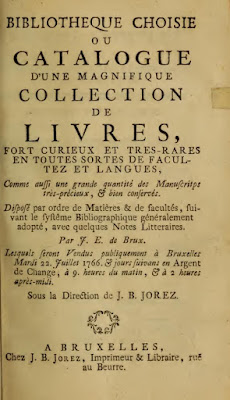 While the identification is not certain, I think that the description (whose wording is very like that of the 1734 catalogue), the price (similar to that achieved in 1734), and the fact that the sale took place in Brussels, like the one in 1734 (making it somewhat likely that the buyer in 1734, and the seller in 1766, lived in that region), makes me think the identification is a safe bet. Lavishly-illuminated Apocalypse manuscripts did not appear for sale very often in the 18th century.
The name of the seller in 1766 is not explicitly stated, but there are at least three copies of the catalogue available online [2]; one of these is annotated on the title-page with his identity:
Another copy of the catalogue is annotated on a flyleaf with the same identification of the anonymous vendor:

These both presumably refer to Maximilien-Leopold de Merode (1710-1769), 3rd Prince of Rubempré. In 1704 his father, Philippe-François de Merode (d.1742) married Louise-Brigitte, only child of Philippe-Antoine, prince of Rubempré and Everberg, after whose death in 1707 the huge Rubempré fortune and titles passed to them [Wikipedia]; thus the previous owner of the Apocalypse, Jean-Philippe-Eugène, count of Merode and marquis of Westerloo, was their kinsman.
Notes
[1] The facimile commentary volumes is: Nigel J. Morgan, Peter Kidd, et al., Apocalipsis Yates Thompson (Ms. 10): libro de estudios / Apocalypse Yates Thompson: book of studies (Madrid: AyN Ediciones, 2010). The manuscript has an entry in the BL's catalogue of illuminated manuscripts, and is now fully digitised.
[2] Three copies of the catalogue are digitised by Archve.org, Google Books, and the Hathi Trust.