An Avignon Collective Indulgence of the 1330s?

This week I thought I would expand upon a recent series of tweets on Twitter, as it relates to several of my interests, including copies/forgeries and the examination of physical evidence. 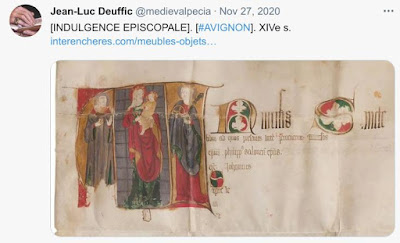 He provided a link to the auction site, which shows the full document (though the image resolution is not as high as I would like): 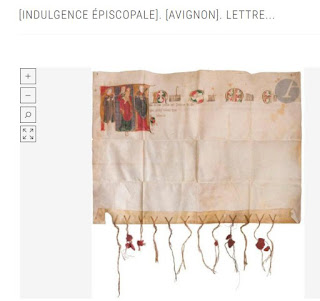 I replied that I thought it had to be a modern copy, and gave a couple of reasons:

Before going further, it may be useful to introduce this idiosyncratic type of document, of which many were issued at Avignon in the 14th century during the Avignon Papacy.
Avignon collective charters of indulgence were not granted by the pope himself, as is sometimes suggested, but by a commission of archbishops and bishops. The Fourth Lateran Council in 1215 had laid down decrees that limited the benefits of episcopal indulgence to 40 days, and this led to the practice of multiple bishops granting indulgences collectively, with a single document, thus conveying a multiple of the maximum-allowed individual grant. Thus if a document names an archbishop and nine other bishops, the document is ‘worth’ a collective total of 400 days’ indulgence.
As Anne Korteweg explains in her catalogue of French manuscripts in Dutch collections [1],

“The bishops who signed these charters resided permanently at the court in Avignon, because their remote diocese existed only in name or contained only a handful of Christians and therefore yielded too little revenue to pay for their keep. Most of these dioceses were in the eastern Mediterranean, in southern Italy, on Corsica and Sardinia, and in outlying regions of the British Isles.”

The text of such charters follow a pattern, essentially consisting of:
Here is an example, with these seven parts marked (click the image to enlarge it): 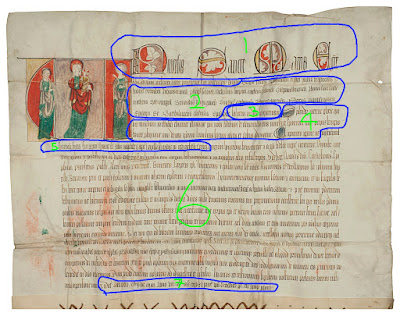 One of the values of such documents for the art historian is that they are precisely dated and localised; even fragmentary copies, lacking their dating clause, can sometimes be dated approximately based on the known dates of the bishops who are named.
Here is another example, with a very similar composition in the historiated initial, but with a kneeling abbot to the left of the Virgin and Child: 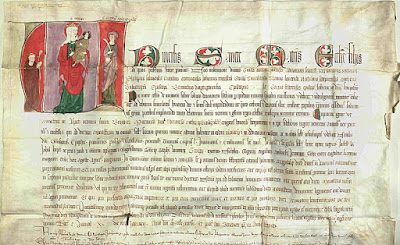 We can now return to the document in the tweets.
Overall, the script and decoration looks very similar to the examples above:

Taking a few of its elements in turn, the opening initial 'U' shows the Virgin and Child in the centre, with Catherine on the right, and a male tonsured saint on the left, perhaps dressed as a deacon, probably St Stephen, holding in his hand one of the stones with which he was martyred: 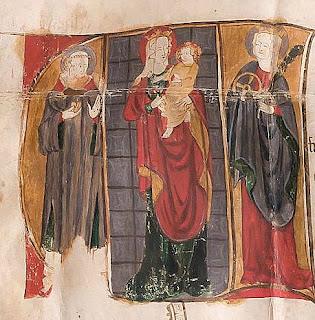 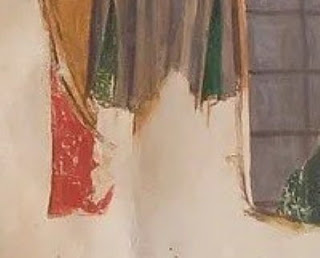 To the right of St Catherine something very weird is going on: 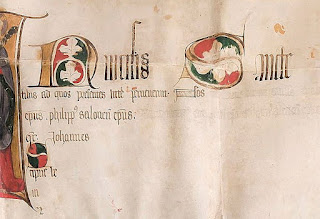 The large decorated display words on the top line have been completed, but only the first words of the next few lines have been written in ink. In the first two of these lines, it appears that the scribe has drafted his text in pencil, but not yet inked it:
I don't recall ever having seen this in a genuine medieval manuscript. A competent medieval scribe did not need to do this. And even if he did do this, for some reason, there is no apparent reason for him to have inked only the beginnings of each line, instead of (more logically and intuitively) writing the full lines in sequence.
As I mentioned in my original tweet, I see no reason why anyone would append their seal to an almost blank document: 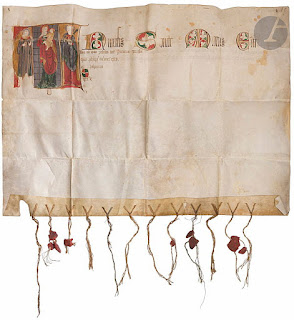 So despite the fact that the document as a whole looks very similar in some ways to a genuine Avignon Collective Indulgence of the 1330s, I think it must have been made as a sort of copy/replica of one, probably in the 19th or early 20th century.
This week, @mss_oeaw (http://manuscripta.at -- Mittelalterliche Handschriften in Österreich / Medieval Manuscripts in Austria) tweeted that the document had been added to the Monasterium website, as part its very useful and interesting collection of illuminated documents.
They show that the fully legible name, "Philipp(us) Salonen(sis) ep(iscop)us" is entirely appropriate to such a document:

as are other names that are not legible in the online image, but which were reported by the auction cataloguer.
The Monasterium website description suggests that most of the text of the document has been erased, but if this had been done, either by abrasion, or with a powerful liquid chemical, I would expect to be able to see signs of this erasure. Medieval documents were usually written on sheepskin (not calf), for two reasons. Apart from the fact that it was usually cheaper, erasures are much more evident when made on sheepskin: therefore, the use of sheepskin made it much harder for someone to alter the text of a document unnoticed. [2]
A second reason why I am very sceptical of the idea that the document has largely been erased, is that I cannot think of any good reason *why* someone would do this. If they wanted to erase the text to re-use the sheet for something else, why did they stop after they had done 90% of the erasure? If they wanted to keep the illumination and discard the text, why didn't they simply cut the illumination from the sheet?
Overall, I think that the most plausible interpretation of the evidence is that someone (perhaps an amateur calligrapher and illuminator, or enthusiast of the Middle Ages) simply decided to make a copy of a document to which they had access. The fact that the exemplar is not known to survive gives this copy some historical value, and warrants its inclusion on the Monasterium website, even if it is less than 100 years old.
[1] A.S. Korteweg (ed.), Splendour, Gravity & Emotion: French Medieval Manuscripts in Dutch Collections, exhibition catalogue, Museum Meermanno-Westreenianum, The Hague (Zwolle, 2004), pp. 55-56.
[2] Coincidentally, this observation was reported by several "news" outlets two days ago, e.g.: https://scitechdaily.com/medieval-lawyers-wrote-on-sheepskin-parchment-because-it-helped-prevent-fraud/ , but this is certainly not a recent observation.
Posted by Peter Kidd at 13:04