A Byzantine Miniature on a Leaf from the Forrer Collection 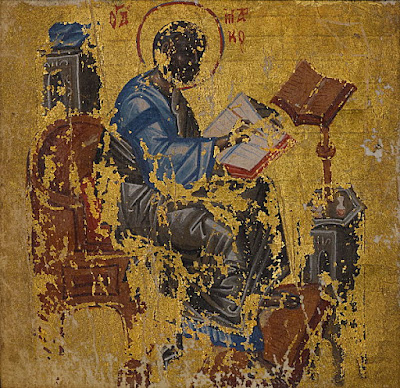 A forthcoming Koller sale has a leaf from a copy of the Gospels in Greek, with the above miniature (24 March, lot 503).

As the catalogue description expains, the parent manuscript is now Chicago, University Library, MS 129 (de Ricci, Census, I, p. 568). It preserves one miniature, and a colophon from which we know that it was written by Nikolas of Edessa in 1133.

The miniatures were apparently added to the volume in the late 13th- or early 14th-century. Looking at the whole page one can see how the miniature has been inserted, somewat awkwardly, in the space left below seven lines of text: 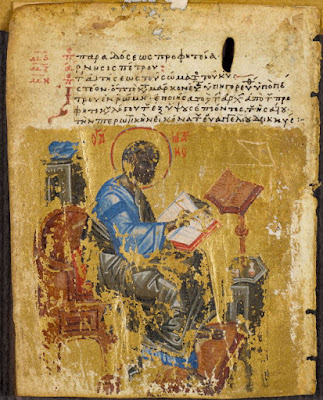 The miniature is on a verso; the seven lines of text continue from the recto: 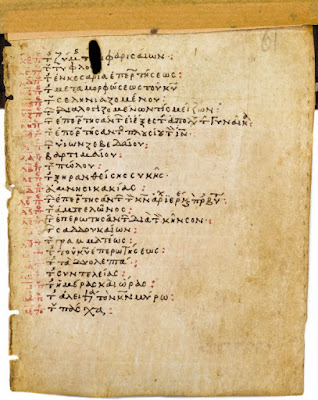 In the upper right corner is the pencil foliation '61', corresponding to a gap in the foliation of the parent volume:

In the lower right corner of the recto is a barely-visible mark, but enough remains of it, and its characteristc purple colour, to be recogised as the ink-stamp of Robert Forrer: 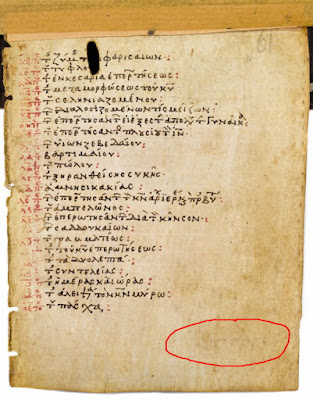 It can be compared with this example, with its characteristic majuscule 'R's:

And with the slightly different line-drawn example in Lugt:

The Chicago catalogue description shows that the parent volume was at the Metochion of the Holy Sepulchre, Istanbul, and had five miniatures in 1864. One of these had been removed by the time the manuscript was examined for a catalogue published in 1915, althugh the present one, on fol. 61, was still in place [1]. The present leaf must have been removed (along with two others) before 1929 when the volume was acquired by Chicago.
I do not know where the other missing leaves are (and nor, it seems do the Chicago and Koller cataloguers), but I think it likely that they, too, were owned by Forrer. They may possibly have been accidentally destroyed in the past hundred years, but there is a reasonably good chance that they will resurface ... 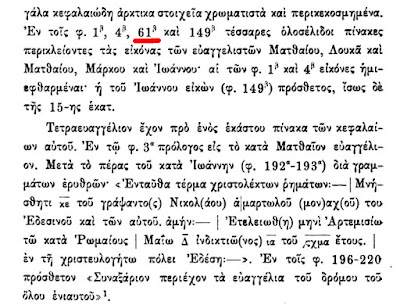