A Postscript to: A Psalter Leaf at Harvard 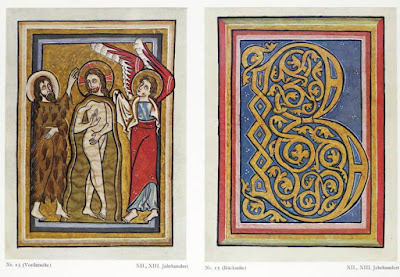 A few months ago I wrote a post about a leaf at Houghton Library, with a miniature of the Baptism of Christ on one side and a Beatus initial on the other, in which I identified it as one of the leaves sold anonymously by Gustav Nebehay at Sotheby's in 1926.

Only later did I realise that this conflicted with the account of its provenance as published in 2010, which implies a direct line of ownership to Houghton from an auction in 1912, with no mention of the 1926 auction:

In fact, a second proof that it was not "Sold at auction in Munich in 1912 to Edgar Huidekoper Wells", is that it was still with the same bookseller, C.G. Boerner, the following year: it was re-offered for sale in C.G. Boerner, Katalog XXIV, Manuskripte mit Miniaturen, Einzelminiaturen (Leipzig [1913]): 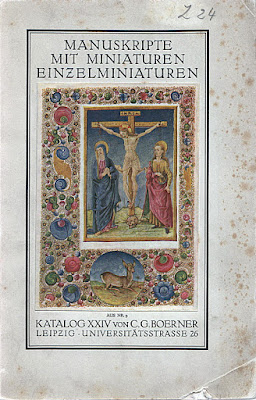 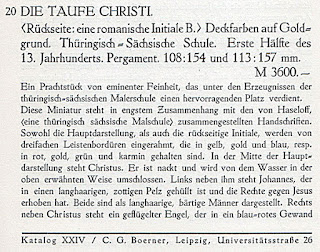 The leaf may have passed to a private collector, or it may have stayed within the Trade: it seems that the dealer Nebehay was deliberately assembling a collection of leaves and miniatures with the intention of selling them at auction in London, which he did in June 1926. At the auction, our leaf was bought by Maggs for £80:

Maggs were perhaps acting on behalf of Edgar H. Wells & Co., a rare book company in New York, who in turn sold it to Dyer, also of New York, and the latter gave it to the Fogg in 1927. Slightly misleadingly, the Fogg curatorial file records it as having been in the "Maggs Collection":