Descriptions of One Manuscript or Two?

One of the challenges of tracing a manuscript from owner to owner is to verify that it is indeed a single manuscript whose path you are following, not two or more similar ones. We can exemplify this problem by looking at the catalogue descriptions of the Villanova manuscript discussed in a recent post.

Combining what we know with near-certainty about its provenance -- that it was owned by Edward Hailstone, who died in 1890, and that it was bought by John F. Lewis from Tregaskis in 1925 -- we can fill in several intermediate owners, based on information provided by de Ricci's Census and the Schoenberg database, as follows:
The binding is described successively as:

It is not hard to accept that all these descriptions could refer to the same binding, but with varying -- generally increasing -- levels of detail. 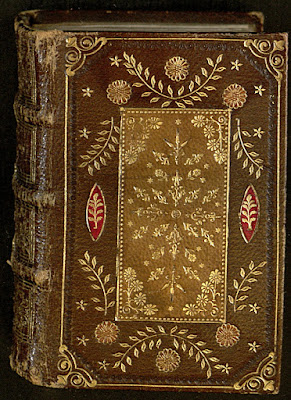 The reported dimensions of the volume remain pretty constant from one description to the next, with a slight divergence in the three 1913 and 1915 descriptions:
This looks straightforward, but note that the reported number of leaves also diverge significantly in the same three catalogues:
This should lead us to suspect that the book described in the 1913 and 1915 catalogues was a similar, but different one. It is not uncommon for the Schoenberg database to conflate two or more different manuscripts and treat them as "duplicates", if a few of their features are the same. One therefore always needs to consult the original descriptions to verify whether or not such conflation has taken place. In the present case, the rest of each catalogue description makes this very unlikely: the 1913 Sotheby's description states "from the Hailstone collection" and the 1915 Hodgson catalogue mentions "the Hailstone book-label".

The discrepancy in the number of leaves is likely to be a simple counting error made by the 1913 Sotheby's cataloguer. Anyone who has tried to count the leaves of an unfoliated manuscript (especially a small, fiddly one like this one), knows how easy it is to make mistakes. Cataloguers are often unconsciously influenced by, or deliberately borrow from, earlier descriptions (especially when cataloguing items of relatively low value), and it would not be at all surprising if the 1913 Ellis description simply took its leaf-count from the Sotheby's description, and the Hodgson description two years later took its leaf count from one of these, but subtracted 2 so as to exclude the flyleaves at the end of the volume.