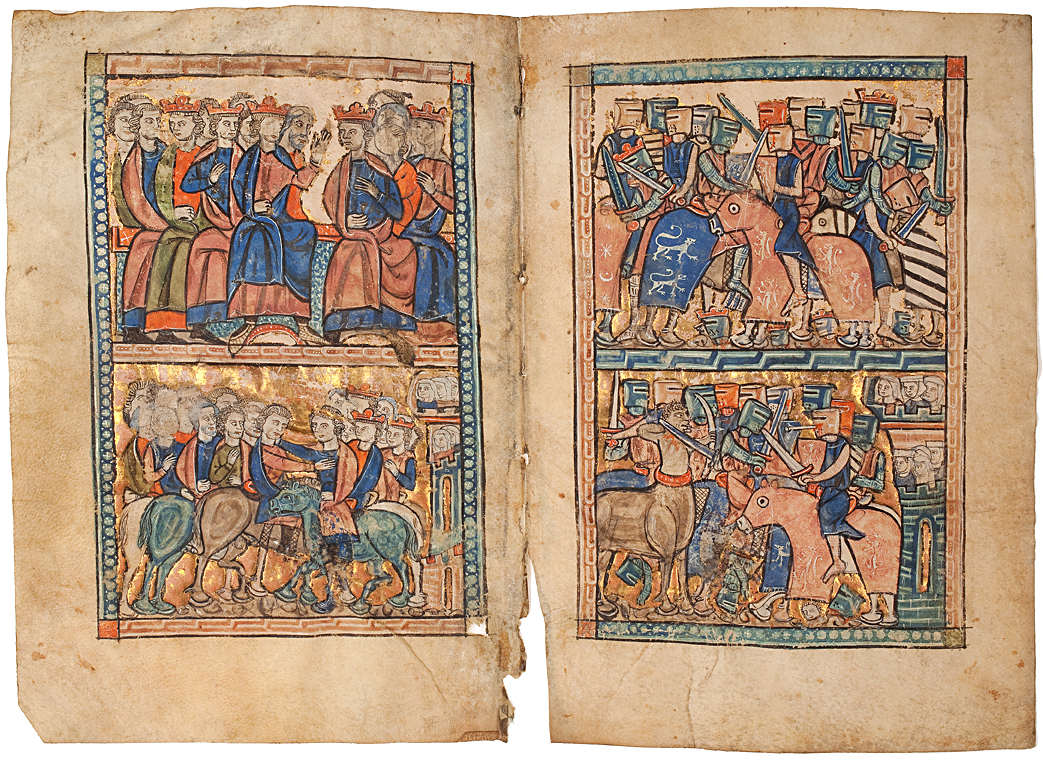 A week ago I mentioned and illustrated a pair of full-page miniatures from the earliest illuminated manuscript of the Roman de Troie, which were offered for sale, with the two shown above, by Erik von Scherling in his Rotulus catalogue, vol.IV (1937), no.1817: 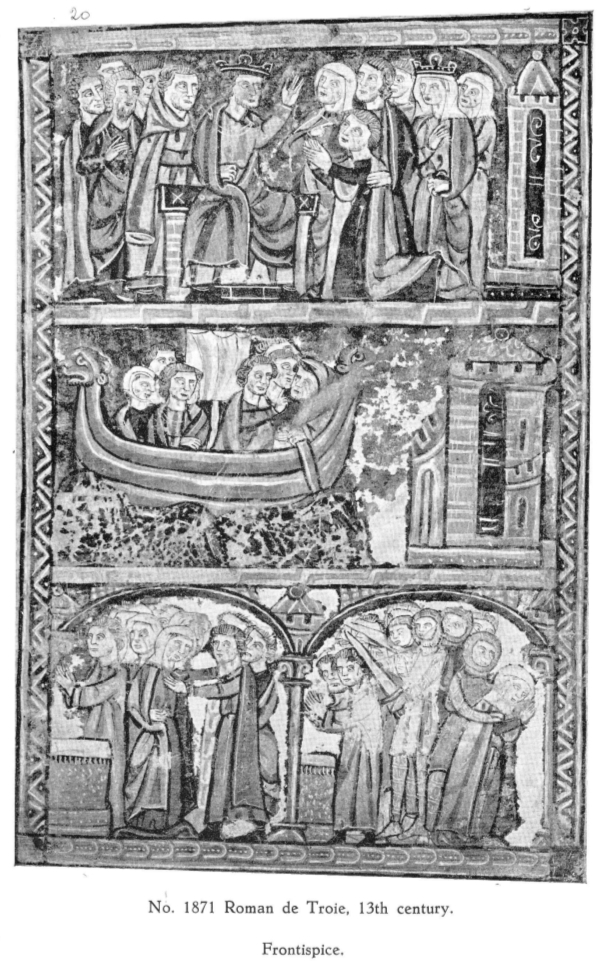 He described them as follows:


"These paintings were discovered in a magnificent 12th century binding of an evangeliary, where they had been pasted in, probably in the early or mid-19th century, by Libri, the famous thief of mss. and books, who sold so many mss. to Lord Ashburnham. The evangeliary-binding with the miniatures must have been bought privately, from Libri by the Duke of Newcastle in about 1850 from whose art-collections at Clumber I purchased that binding."

We have encountered Guglielmo Libri and Lord Ashburnham before. I have not yet blogged about the Duke of Newcastle's manuscripts at Clumber, although we have met one of them in passing.

The binding (of which the centre-panel is a 19th-century fake), as well as the miniatures, were bought in December 1938 by Jan Herman van Heek (1872–1957), and are today all at his castle, Huis Bergh: 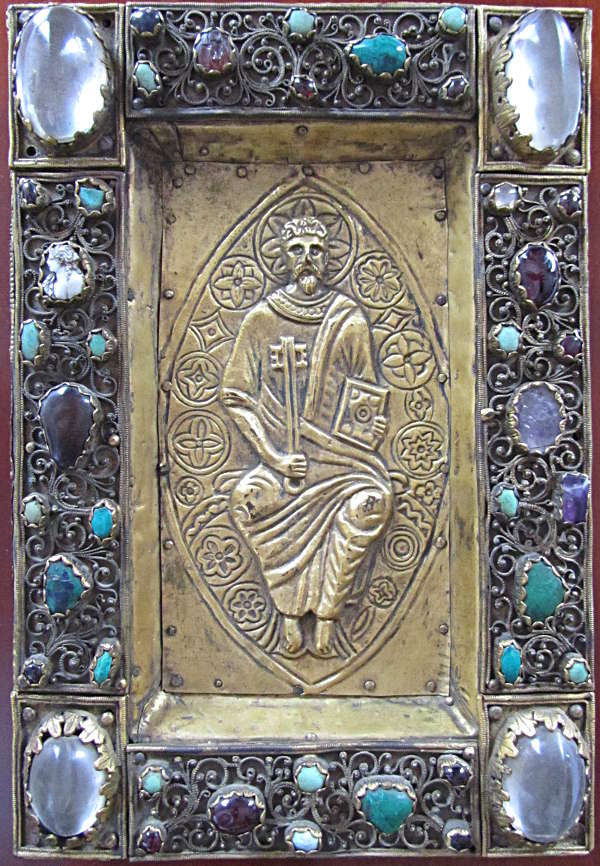 The binding is a rather tragic object, because although the medieval spine and sewing of the manuscript survives:
all the leaves have been sliced out near the spine:
The inner face of the back board has a printed ticket of the "Midland Counties / Museum. / Nottingham Castle", inscribed "[Duke of?] / Newcastle / 1879" [1]: 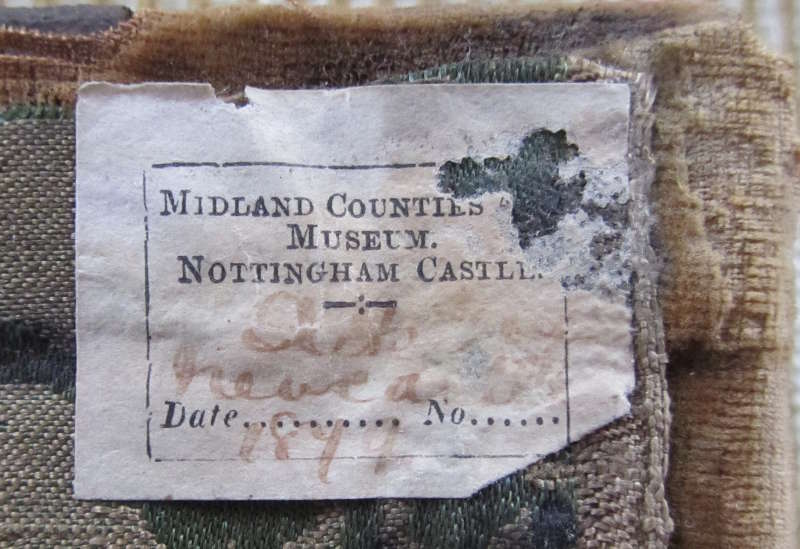 Unknown to von Scherling, his miniatures came from a manuscript in Paris (BnF, ms. fr.1610), which now has only two of its pairs of full-page facing miniatures:
It also has a colophon, in which the manuscript is dated 1264:

The Paris manuscript is catalogued with further bibliography here.


---------------------
All the miniatures are reproduced and discussed by Elizabeth Morrison, "Linking Ancient Troy and Medieval France: Illuminations of an Early Copy of the Roman de Troie", Medieval Manuscripts, Their Makers and Users: A Special Issue of Viator in Honor of Richard and Mary Rouse (Turnhout, 2011), pp.77–102.

EDIT: 7 Feb. 2015. When I originally posted this blog earlier today I incorrectly said that only one pair of miniatures survives in the Paris manuscript; Beth Morrison kindly pointed out my slip, and I have now added the second pair of images above.

[1] EDIT: 1 March 2015. I have been in touch with Nottingham Museum and they have kindly informed me that the Museum's Loan Ledger records that in October 1879, a collection of pictures and objects came to the museum on loan from the Duke of Newcastle, amongst which was a 'Book cover, illustrated manuscripts in the inside, set with precious stones in the centre St Peter with Keys and book.' This was returned on 22nd July 1884.
Posted by Peter Kidd at 08:30