Alan Thomas and the Gabárty-Brandeis Manuscripts

In a previous post I discussed a cutting from the Bible of Pedro of Pamplona that was owned by Eugene Gabárty. I mentioned that he had sold it, with an Italian illuminated leaf, but somehow re-acquired them, and gave them both Brandeis University.

Since writing that post, I have acquired some auction catalogues, including a few that were owned by the bookseller Alan G. Thomas (1911–1992), who traded as Commin's, in Bournemouth (there is an online obituary and a appreciation on the website of the Antiquarian Booksellers' Association).

One of these catalogues is the one in which Gabárty sold the two Brandeis items, and he is named on the title-page and front cover: 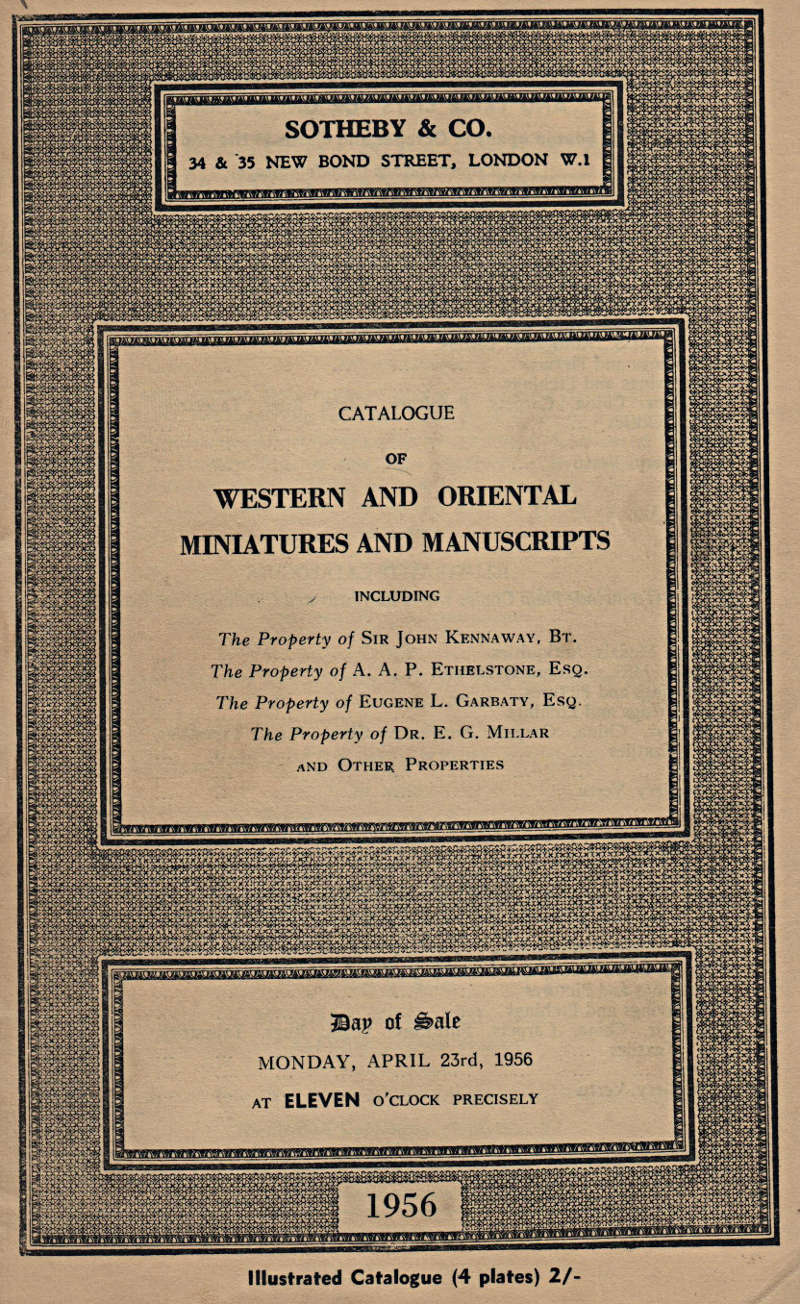 This copy of the catalogue has several loose enclosures, which shows the typical stages of buying manuscripts at auction in the days before estimates were printed in catalogues, and when most items were sold without reserve.

First, Thomas wrote to Sotheby's about two weeks before the auction to obtain estimates for various lots, including lots 34 and 35, the Gabárty-Brandeis ones. A representative of Sotheby's replied suggesting that they could be obtained for £50 and £100 respectively: 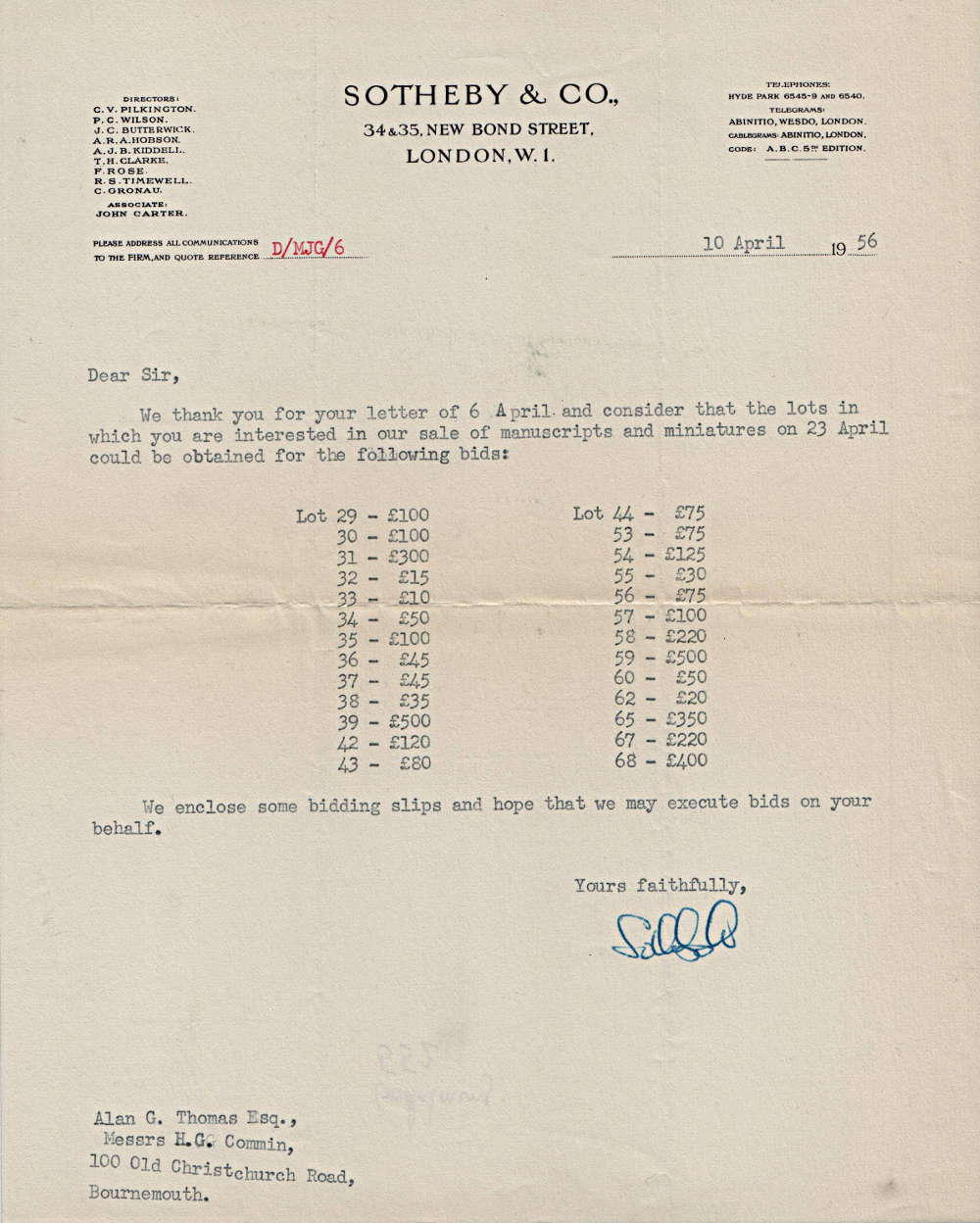 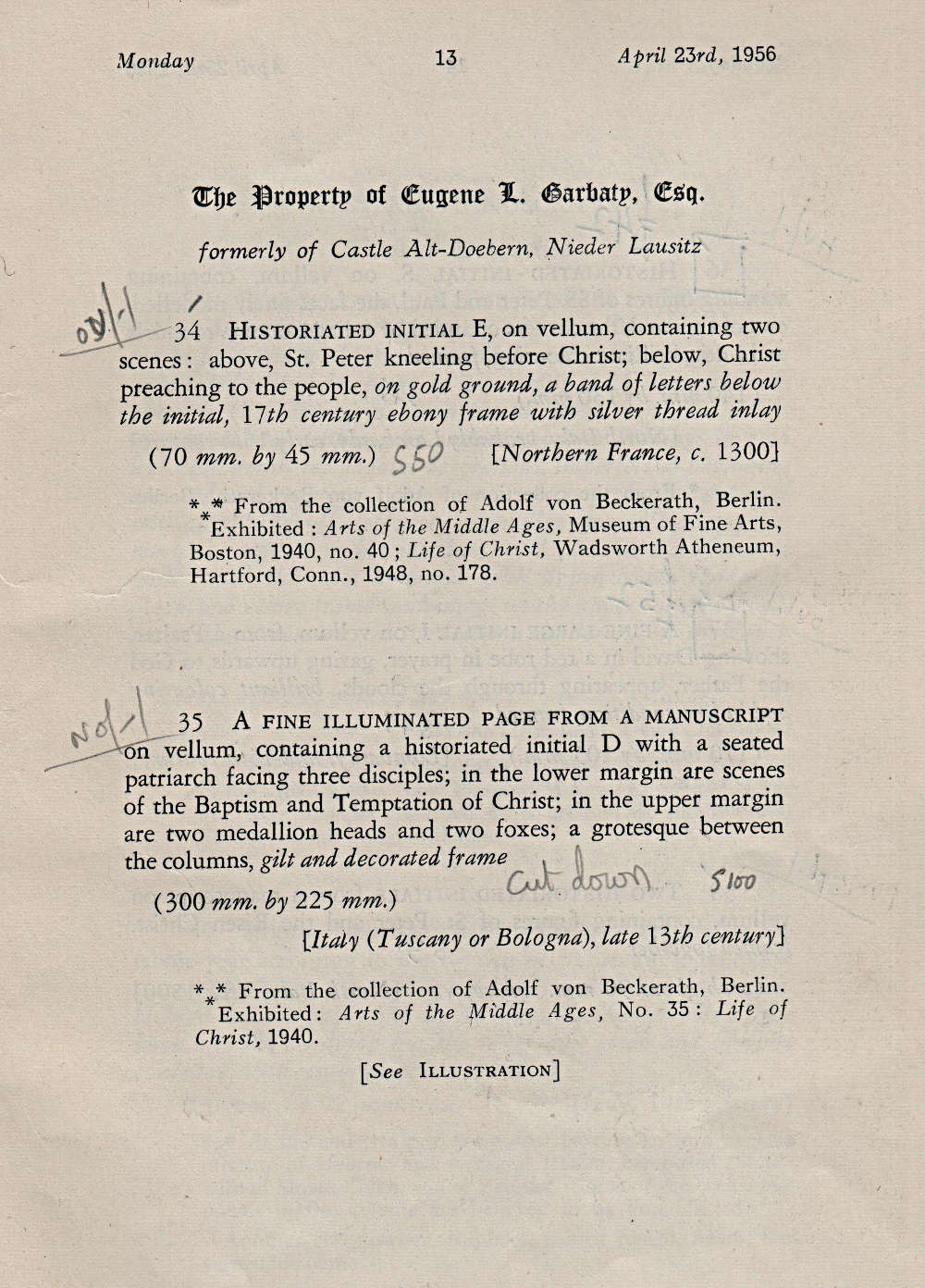 Thomas's successfully bid on several lots, as confirmed by a note from Sotheby's written to him after the sale: 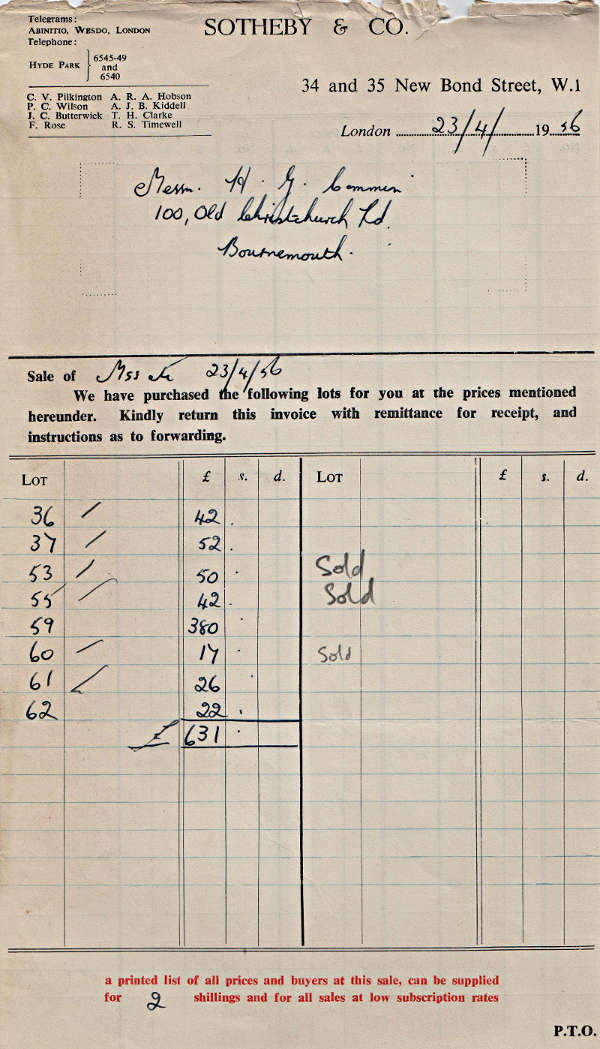 But he was out-bid on both of the Gabárty-Brandeis lots; as stated in the previous post, both went to "Hammerstein", for £55 and £70 respectively, as recorded in the marked-up auctioneers copy of the catalogue, and in the printed results lists distributed to catalogue subscribers: Interestingly for our purposes, the two Gabárty-Brandeis items were singled out for mention in the report of the sale in The Times the following day, where the final sentence reads:


"Nor were single pages to be acquired for next to nothing—for example, an initial E on vellum containing two scenes (Northern France about 1300) and a page with a D and decorations of various kinds (Italy, late thirteenth century) made £55 and £70 respectively" 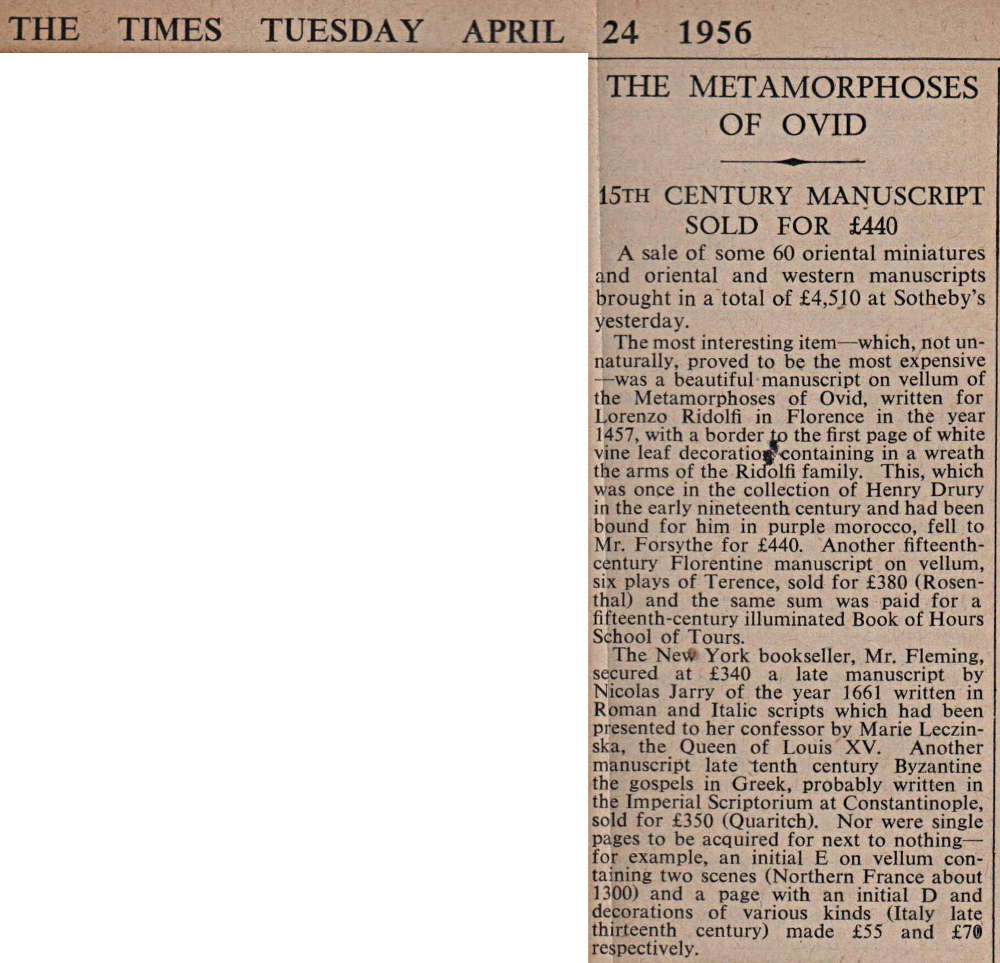 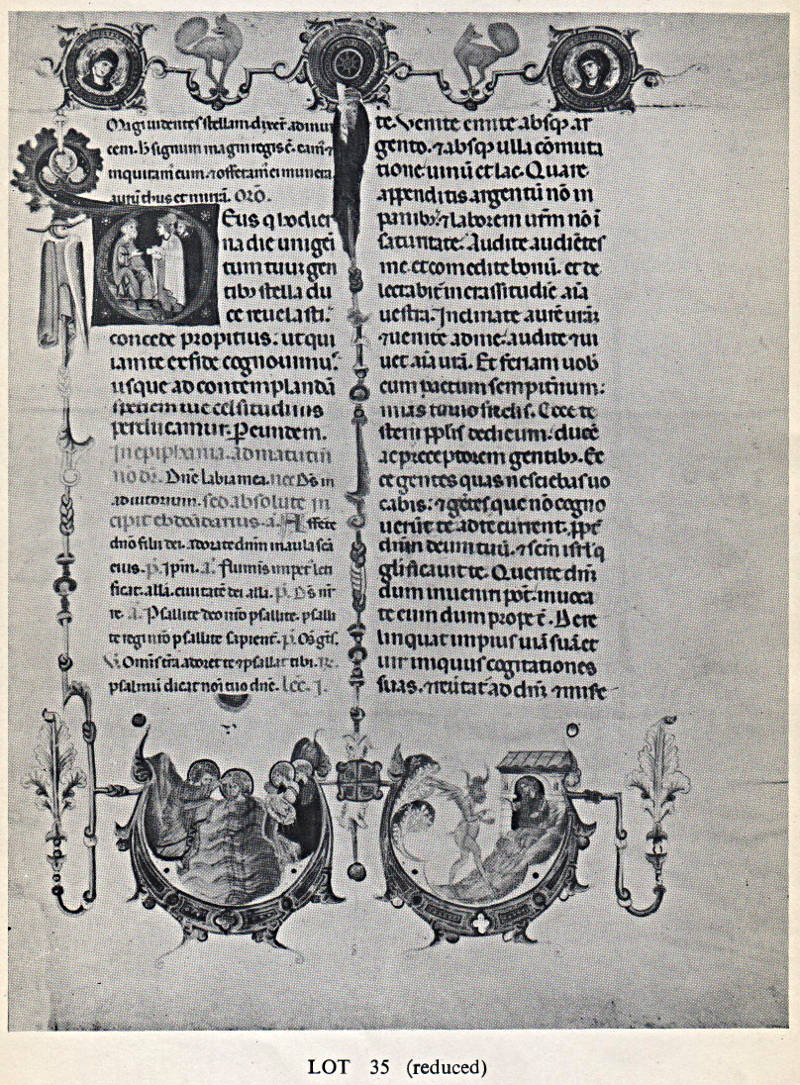 If I find time I will have more to say about this leaf in a future post.
Posted by Peter Kidd at 13:23