A Manuale from the Augustinian Convent of Sts James and Christopher, Steterburg (Lower Saxony)

Having discussed one of Occidental College's two medieval codices in a previous post, we can turn to the other: a fascinating German nuns' book – a manuale – whose origin can be deduced from its textual contents. 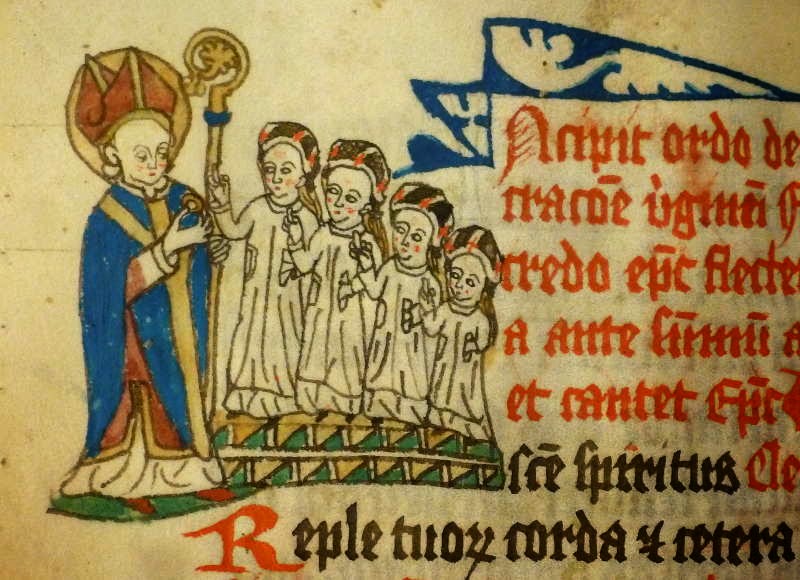 But before turning to its origin, what can we tell about its more recent provenance?

Stuck to the front pastedown is a bookplate with an image of a scholar in front of a church, with "MENTE LIBERA", "GES" and "CHAMPEL": 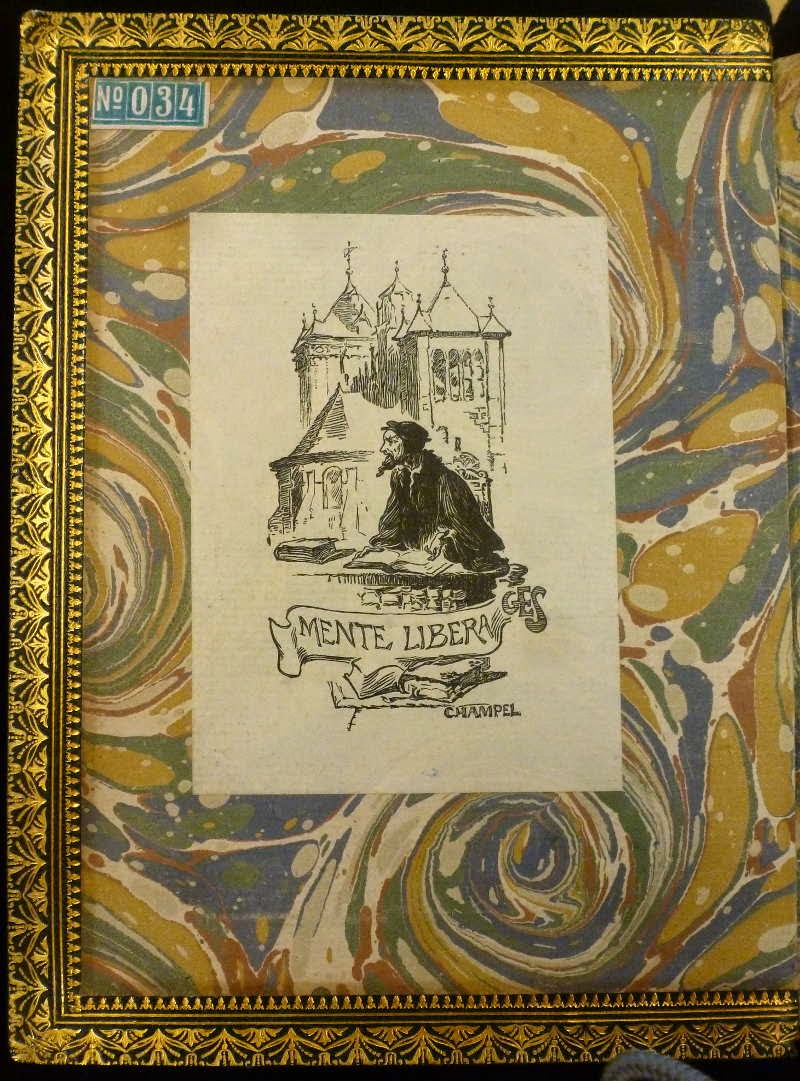 A web search quickly finds the same bookplate in a book at Penn, where it is identified as the:


"Bookplate of Gaspard Ernest Stroehlin (1844–1907) a Swiss minister and professor (specializing in church history) at the University of Geneva. "Mente libera" was his motto; "Champel" appears to be an allusion to Champel, Switzerland, where the reformer Michael Servetus was burned at the stake in 1553. The building in the background is probably St. Pierre Cathedral in Geneva, where Calvin famously preached"

and indeed the present volume has the ink stamp of Hans Asper: 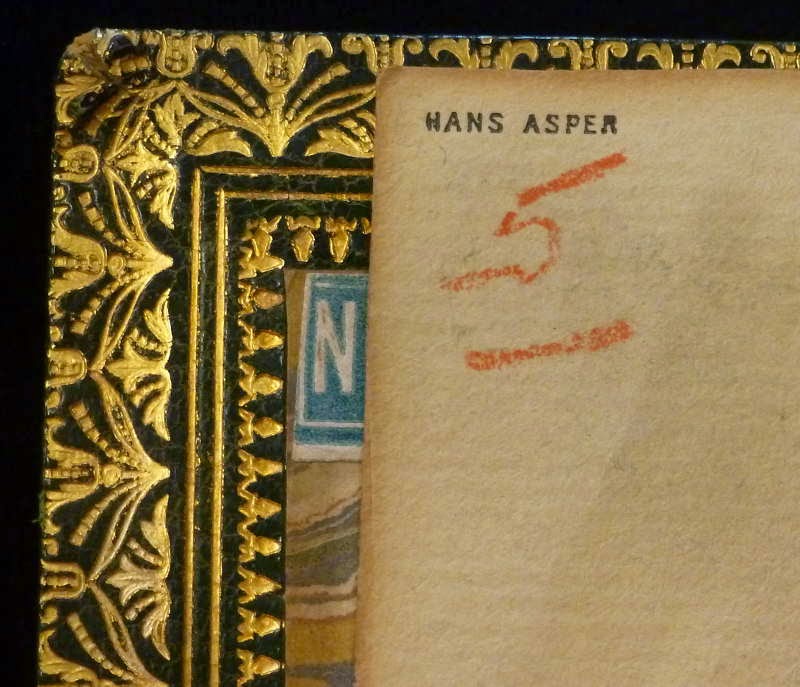 In due course I hope find out what that red "5" refers to, as well as the "No.034" paper label on the pastedown: The contents of the volume is in two main parts, the first part a Processional. The text begins with the chants for the procession on the feast of the Purification of the Virgin (or Candlemas, 2 Feburary): 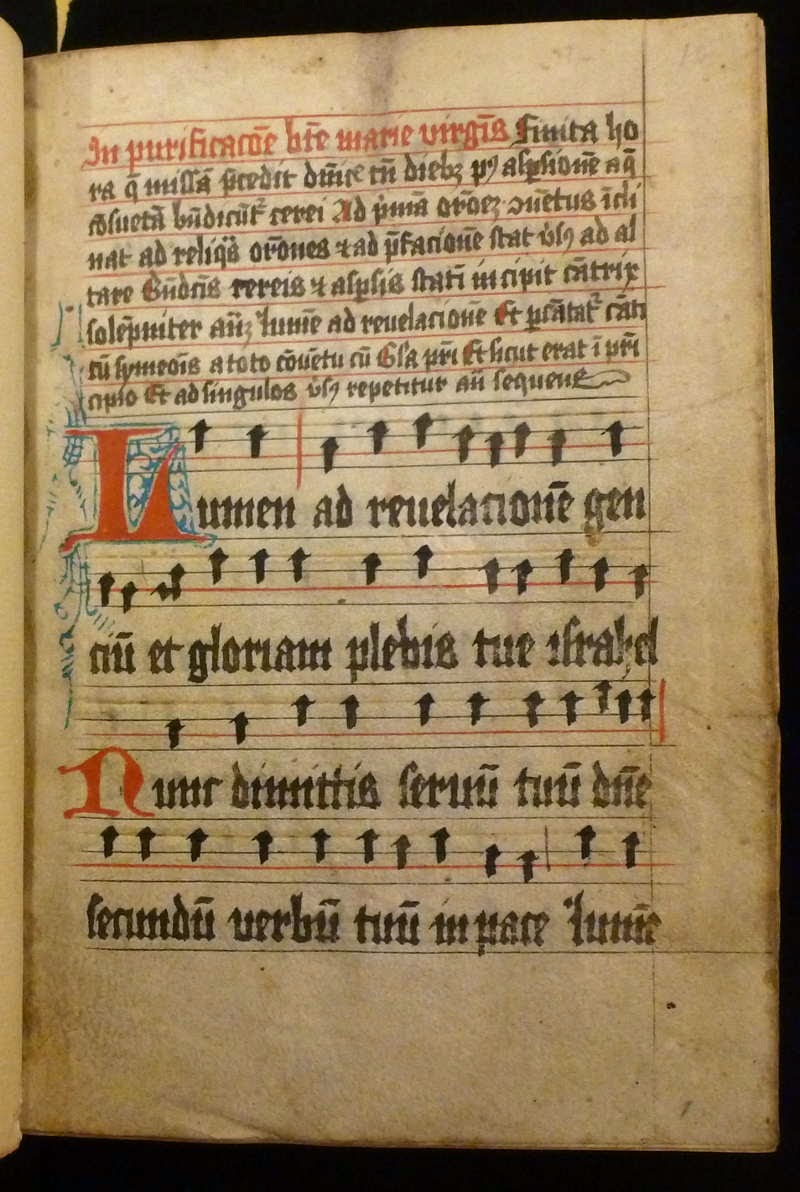 The rubrics give a good sense of the contents of the Processional part of the volume (I have put some significant ones in bold):

The mention of an altar dedicated to St Bernward suggests that the convent was in the area of Hildesheim.

This first half of the volume is decorated with non-figurative initials: 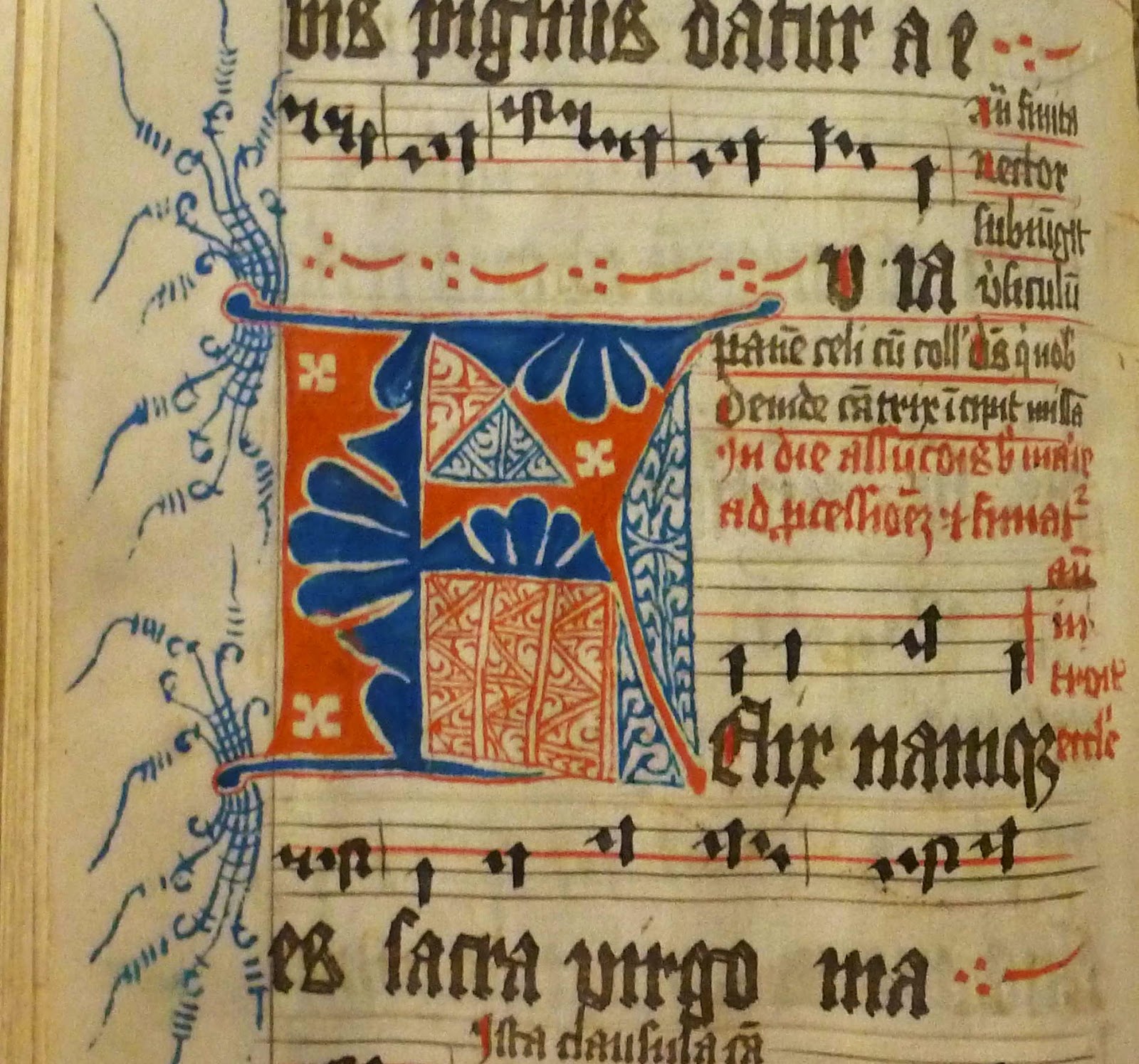 The second portion of the volume (which continues without break from the first portion, on a verso) contains texts for the acceptance of a novice into a convent of canonesses regular: 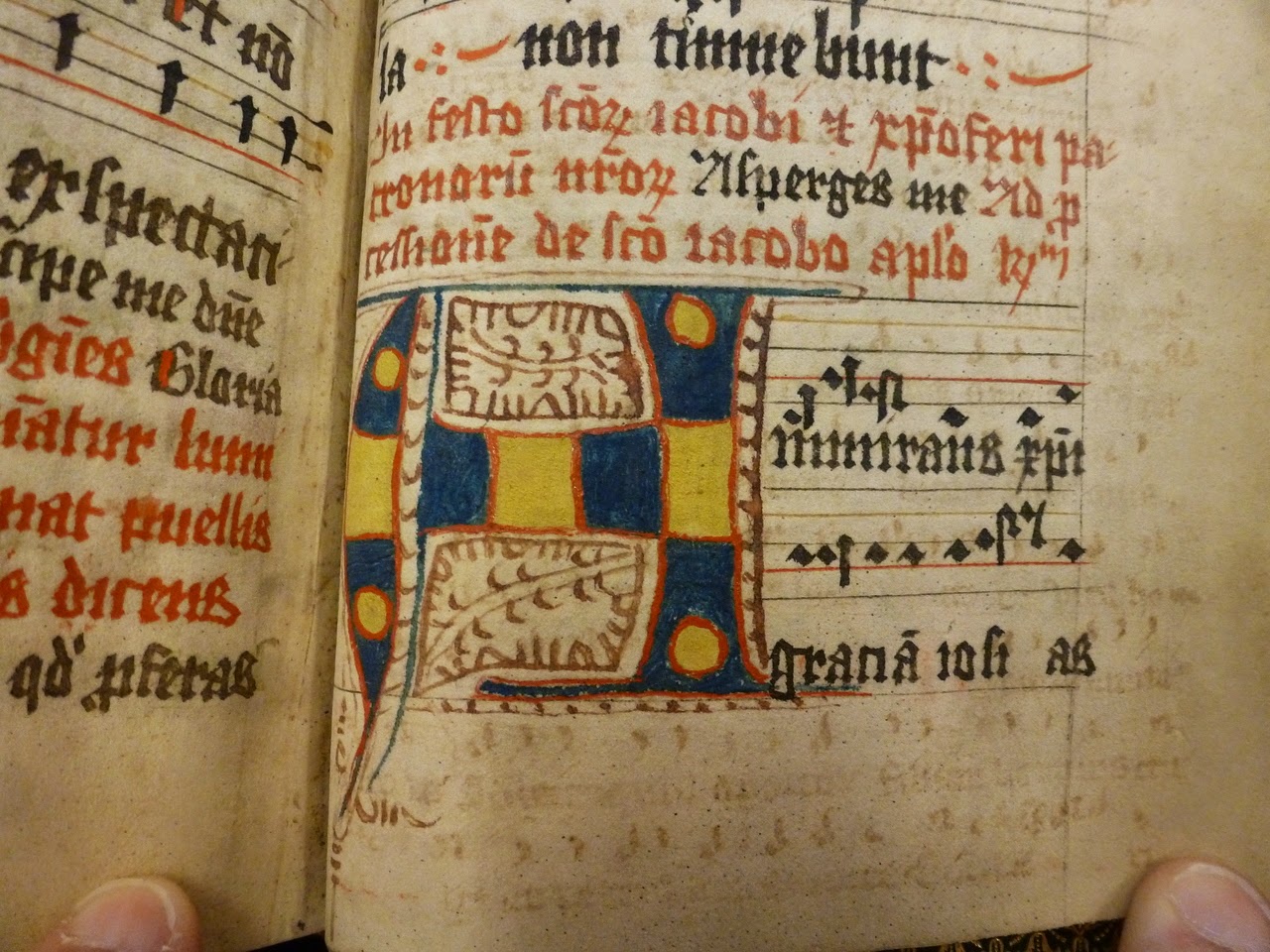 This last rubric, referring to Sts James and Christopher as "our patrons", tells us we are looking for a convent dedicated to these two saints. There is ample evidence that it was an Augustinian house; in addition to the text mentioned above referring to "sororum ordinis beati Augustini" (fol.54r) the manuscript has three litanies of saints (beginning on fols.40r, 69v, 101r), in the first two of which St Augustine appears first among the Confessors, and in the second of these St Monica, Augustine's mother, has been added in second place among the virgins: 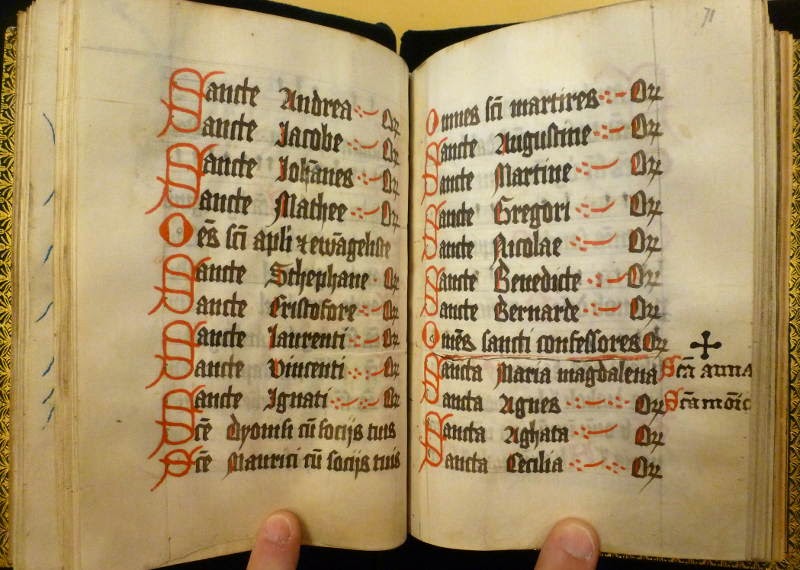 When Occidental kindly sent me some images of the manuscript two years ago neither I nor the specialists of German MSS that I consulted were able to identify the relevant house. But I have now found this book online:

which describes and reproduces some MSS that are clearly extremely close in contents and decoration to the Occidental manuscript: 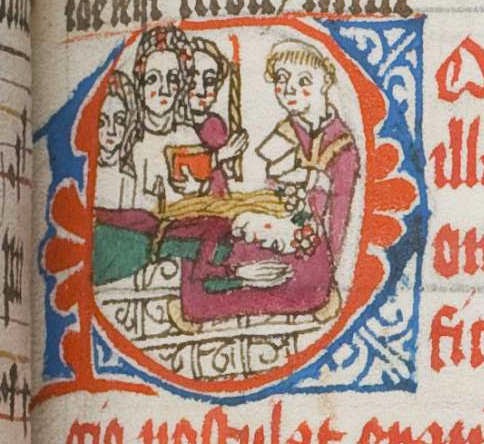 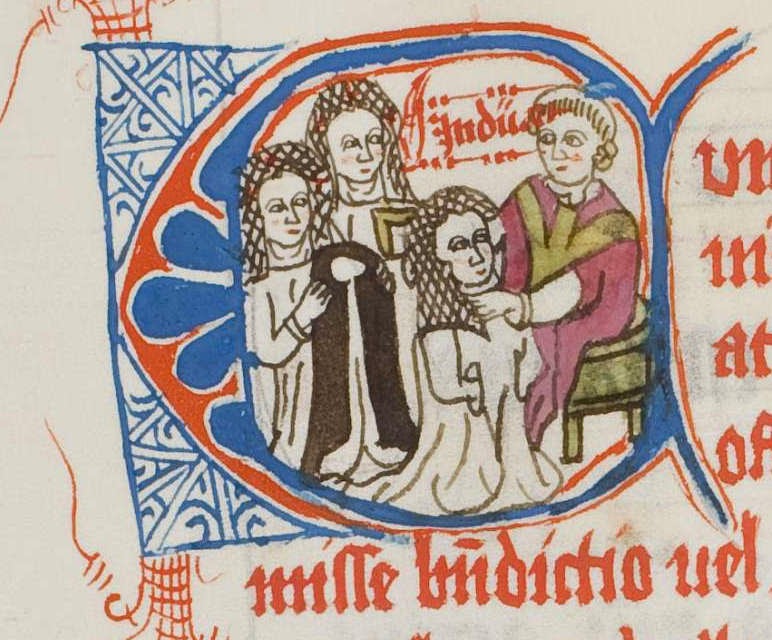 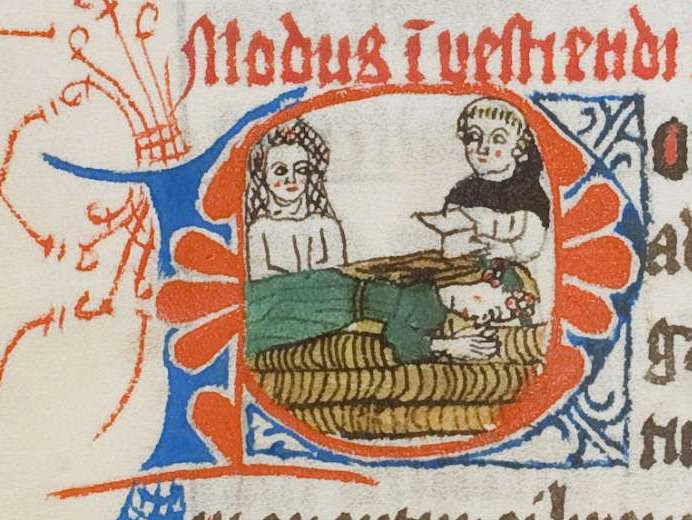 Thus the puzzle is solved: the Occidental manuscript must, like others studied in Lutz's book, have been made for the convent of Augustinian canonesses of Steterburg (on which see the German wikipedia entry), which was dedicated to Sts James and Christopher: 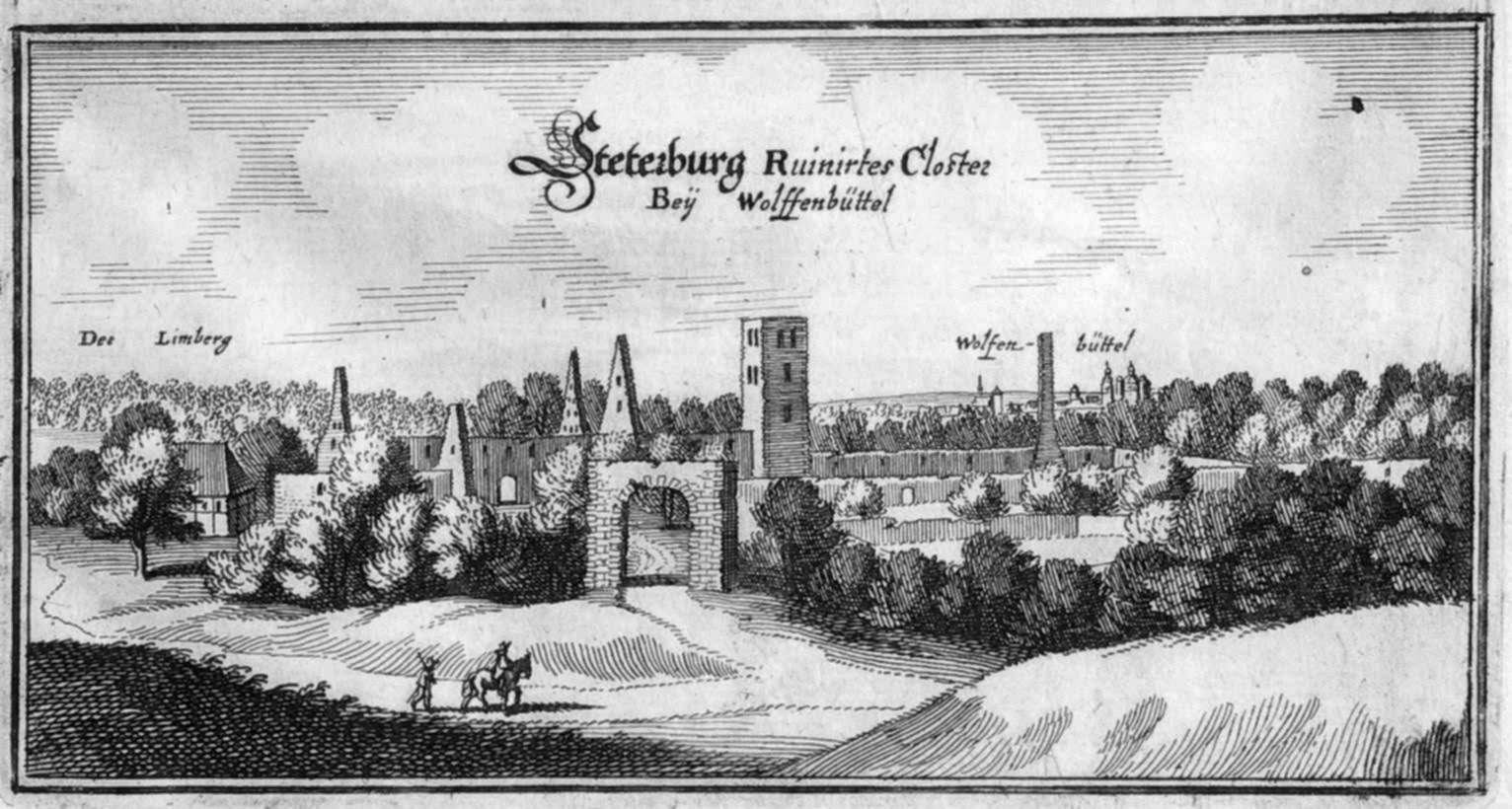 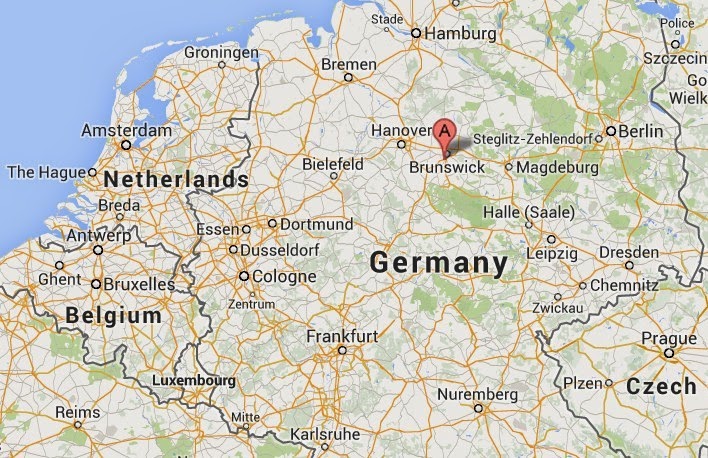