Most of the medieval manuscript leaves in the Library's Special Collections at Occidental College were given by Robert Ormes Dougan (1904-1999), and have his bookplate on the mount: 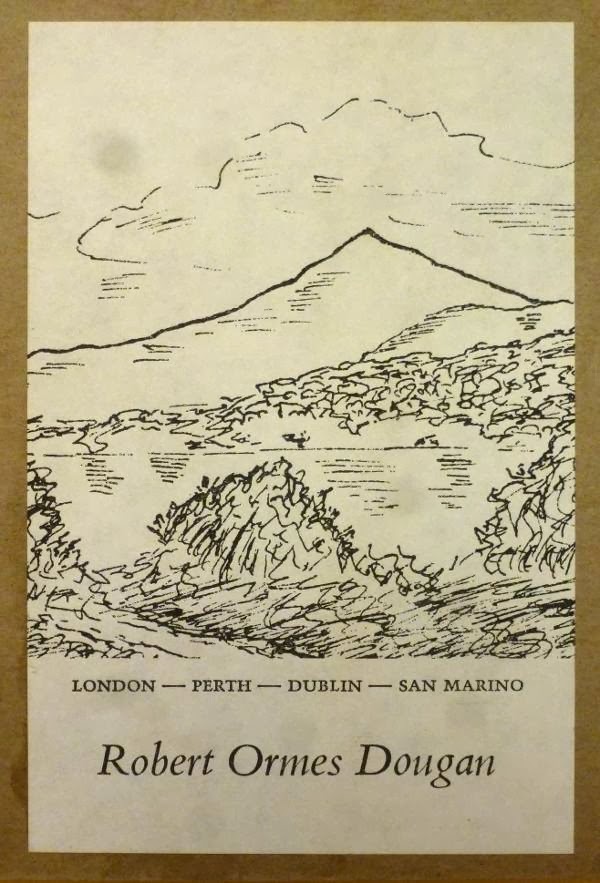 The curious legend "London - Perth - Dublin - San Marino" is explained by his obituaries in The Independent [of London] and the LA Times: of Scots origins (the landscape on the bookplate is presumably Scottish), he attended university in London; after WWII he was the city Librarian of Perth (Scotland); in the early 1950s he became deputy Librarian of Trinity College, Dublin; and in the late 1950s he moved to the US and spent the last part of his career at the Huntington Library, San Marino.

The leaves he gave to Occidental each have a typescript description which ends with a price-code, usually typed, but in one case added in ink:
Is it possible to crack the code?

Normally we would expect to see clear patterns in the occurrence of coded prices; for example, we would expect to see the letter representing "0" occurring frequently (both singly and doubly) at the end of coded prices, but this is not the case here (dd, mm, uu, and bb all appear at the end of a coded price). Probably the reason is that Dougan would have converted round figures in British pounds sterling into US dollars, and perhaps also included shipping costs.

Another peculiarity is that normally we would expect only 10 letters (not 11) to represent the ten digits 0-9, so perhaps one letter is a mistake, or represents something other than a digit. If we remove the letter x (which appears only once, in the handwritten example above), the remaining letters can be arranged into the code-word cumberland (c=1, u=2, m=3, etc.), a price-code known to have been used by The Times Bookshop, Dawson's of Pall Mall, and Philip Hofer, among others. Perhaps the "x" is not a letter and is in fact instead a multiplication symbol "×" in which case "m × d" might mean something like "3 × 10" i.e. $30.

Not surprisingly, a few of the leaves in the collection come from dismembered manuscripts formerly owned by Otto F. Ege. They will be the subject of the next post.