It includes some interesting manuscript items under the heading of "Calligraphie", including a Breviary of Henri Tomacelli, abbot of Montecassino, dated 1404 (no. 645), which later appeared in the Firmin-Didot auction catalogue, and a so-called Pontifical (actually a Benedictional) destroyed in 1871, begun for John, Duke of Bedford, and finished for Jacques Juvenal des Ursins (no. 646):

and at the end of the section is an illustration of the latter: 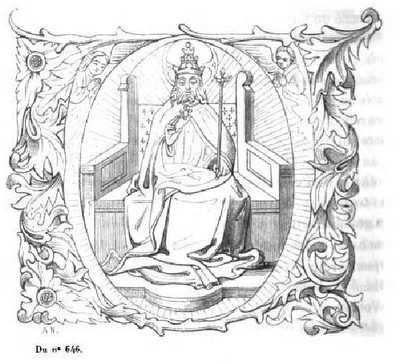