One of the better-known and easily recognised ex-Ege manuscripts was a copy of Thomas Aquinas's Commentary on Peter Lombard's Sentences, Book I, of which a leaf is shown above. Leaves from the manuscript are included as no. 40 in Ege's most famous portfolio: Fifty Original Leaves of Medieval Manuscripts, issued by his widow two years after his death in 1951.

Although Philip Duschnes of New York was apparently the first dealer to offer single leaves of the manuscript, it is likely that Ege was responsible for breaking it up: not only did he have enough leaves to include in his 1942(?) portfolio of Original Leaves from Famous Books, Nine Centuries as well as the posthumous Fifty Original Leaves portfolios, but a cache of 32 leaves from his collection was sold by his heirs at Sotheby's in 1985. The finest leaf of the manuscript was retained by the Ege heirs as part of the "Family Album", acquired by the Beinecke Library several years ago; if Duschnes had broken up the volume, he would doubtless have sold this leaf.

I wrote a blogpost about the provenance of the manuscript last year. We know that the volume was still intact in 1925-26 when offered for sale by the bookselling firm of Davis & Orioli, based in Florence and London. It was also still intact when owned by an "Unidentified American bookseller", but was broken by 1941, when Duschnes offered leaves in his Catalogue 48.

Ege is now a very well known name in the world of medieval manuscripts in US collections, and Duschnes has also attracted a fair share of attention from a number of students, including me. I am also interested in other lesser-known booksellers who occasionally sold medieval codices, leaves, and cuttings; in due course I plan to write blogposts about dealers such as Dawson's Book Shop of Los Angeles and Ferdinand Roton Galleries of Baltimore.

I had a few spare hours in New York recently, before catching my overnight flight home, and I spent them at the New York Public Library beginning to look through their excellent set of Dawson's catalogues. In their 35th Anniversary catalogue in April 1940, Ernest Dawson records how he started to offer medieval manuscripts about fifteen years earlier:

"Illuminated Manuscripts of the mediaeval period has become one of my keenest interests. It was about 1924 that Robert Lingel of New York and Paul Gottschalk then of Berlin, began to make visits to Los Angeles bringing with them beautiful Illuminated Manuscripts, We began to find collectors of these and soon the auctions in New York and London began to yield specimens. I spent a summer at Berkeley studying every book I could find in the great University Library relating to this subject and examined page by page the magnificent specimens presented by Phoebe Hearst. [...]"

This account is accompanied by a photo of the staff and the shopfront at 627 South Grand Avenue, Los Angeles, with leaves of a large choirbook visible in the window to the right: 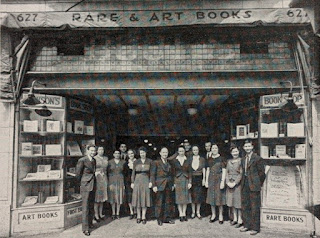 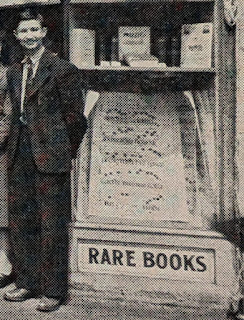 My recent afternoon in New York was long enough to briskly examine the Dawson's catalogues from 1929 to 1942: 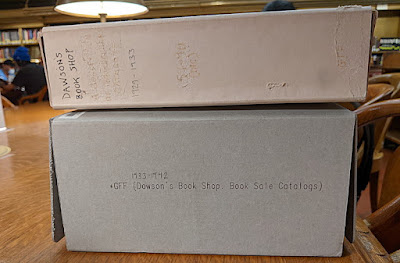 I made a number of discoveries but, as you will have guessed, one of them was the Aquinas, which Dawson's offered in Catalogue 126 (April, 1938), item 45: 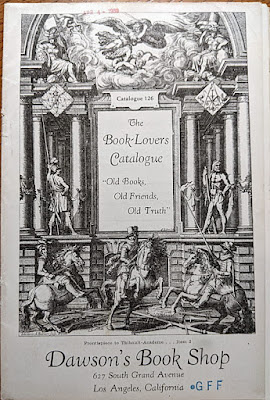 At $300 for 309 leaves, the book cost about $1 per leaf. We know that Duschnes priced the plain leaves at $4 each, and the leaves with illuminated initials at $6.50 each:

On its own this discovery does not tell us much that we did not already know, but it does underline the fact that by searching the catalogues of dealers like Dawson's, we may find descriptions of intact volumes which are currently only known as scattered single leaves. I hope to give some more examples in future blogposts.

However, a puzzle remains. In the 1985 Sotheby's catalogue description of 32 leaves from the Aquinas manuscript, it records the presence of "a cutting from an American bookseller's catalogue in which this manuscript, then with 309 leaves, was no. 12, describing a coat-of-arms on the first leaf [...]". Presumably there was a price is "$" or an American spelling such as "colors" that allowed the Sotheby's cataloguer to state that this clipping was from an American bookseller's catalogue. But as the manuscript was not item 12 in the 1938 Dawson's catalogue reproduced above, it must have appeared in another catalogue, perhaps issued by a different dealer; this is still to be identified.