In the April 1910 auction catalogue of the Stroganoff Collection (discussed in a recent post here), most of the descriptions are too imprecise or generic to make recognition possible, e.g. lot 614, an unidentified 15th-century Florentine half-length bishop-saint:

A few others describe more distinctive features, however, and I have therefore been able to identify a couple, and can thus add some previously unknown, or at least forgotten, provenance to them.

Lot 611 in the 1910 Stroganof auction was described as a cutting of an initial 'A' from a choirbook, having The Saviour blessing in the upper part, and St Peter praying in the lower part: 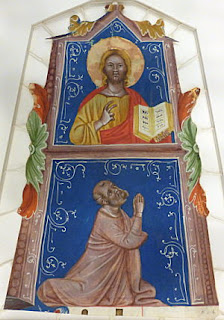 And the identification is confirmed by Count Stroganoff's "C. Gr. Str." ink-stamp on the reverse:

This cutting was doubtless bought at the Stroganoff auction by the Rome bookseller C.E. Rappaport [website], because it appeared in his Catalogue 5 just two months later, in June 1910, as item 223: 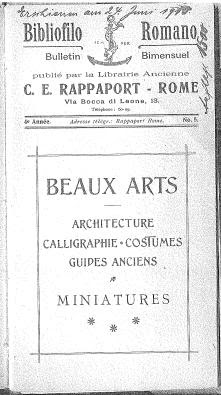 Pia Palladino attributes the cutting above to the same parent manuscript as an initial 'D' with a half-length figure of Christ Blessing (Treasures of a Lost Art, no. 16): 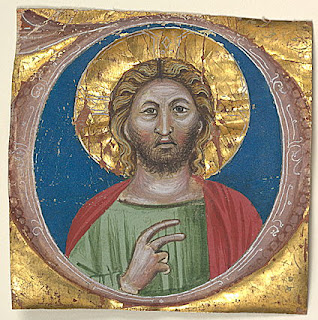 I suspect that it was lot 621 in the 1910 Stroganoff sale:
The earliest known provenance of this cutting was, until now, Leo Olschki in 1924.
Lot 628a in the Stroganoff sale was an initial 'U', said to represent the Apostles in a valley looking at St Martin:
It reappeared in the same Rappaport catalogue, as item 232, with a much more detailed description:

The Rappaport firm's own copy of the catalogue is annotated with buyers' names, and indicates that this item was bought in July 1910 by Boerner, of Leipzig:

Thanks to that clue, we can next find it in a Boerner auction catalogue for 4 December 1911, lot 43:

These various descriptions allow us to identify it with a very unusual cutting at the Allen Memorial Art Museum, Oberlin:
Previously, the earliest known provenance for this cutting was Arnold Mettler of St Gallen, in whose sale at Sotheby's, 27 April 1937, it was lot 295. Pia Palladino discusses it in Treasure of a Lost Art (no. 56) re-identifying the subject matter as Joseph's brothers seeing Joseph and deciding to kill him, and describing four sister-cuttings. She does not mention the Stroganoff ink-stamp, which she would  presumably have recognised from another cutting in the same catalogue (no. 34), which suggests that it may have been erased.
One more cutting is attributed to the same artist by Palladino, now at the Free Library, Philadelphia:
I cannot identify this in the 1910 Stroganoff auction, unless it was lot 614A, an undescribed "Miniature" which was apparently overlooked during cataloguing, and which therefore appears only as a handwritten addition to the printed catalogue: