Count Stroganoff and The Missal of the Tailors' Guild of Bologna 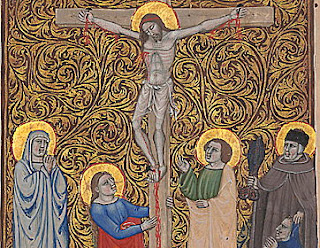 Five years ago I had reason to try to track down a copy of the 1910 auction catalogue of Count Grigory Sergeievich Stroganoff (blog post here). Thanks to Francesca Manzari, and especially to Philine Helas of the Bibliotheca Hertziana, which holds one of the few recorded copies, I was able to get images of the relevant pages.

The cuttings I was searching for do not appear to be in the 1910 catalogue, but another interesting illumination was.

A full-page miniature of the Crucifixion, in a style similar to that of Niccolò di Giacomo da Bologna but probably by his contemporary, Stefano degli Azzi (documented in Bologna from 1363 to 1400), was formerly part of the Lehman deposit at The Met Museum, NYC, and was included in the 2003 exhibition "Treasure of a Lost Art" [1]: 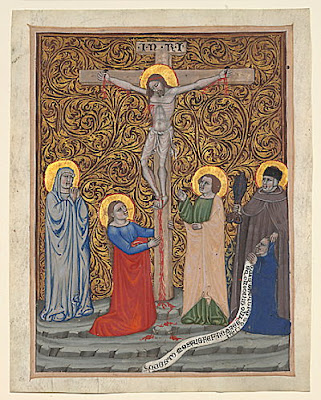 To the left of the Cross are Mary Magdalene(?) and the Virgin Mary and to the right are John the Evangelist and St Homobonus, patron saint of tailors, with his attribute, a large pair of fabric shears: 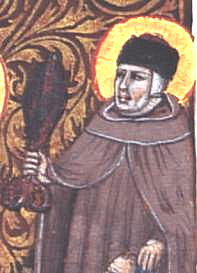 At his feet kneels the patron holding a scroll: 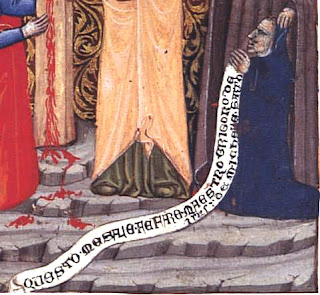 The scroll is a bit easier to read if it is rotated:

Thanks to this inscription we can unambiguously identify the miniature in the 1910 Stroganoff catalogue, in which it was lot 608a:

An annotated copy of the catalogue, images of which I received yesterday thanks to the kindness of Vardui Kalpakcian, show that this lot was unsold ("S.V." = "Senza vendita"):

Count Stroganoff died in Paris a few months after this sale in Rome; I have not yet been able to determine how the medieval manuscripts still in his possession were dispersed, but I am working on it.

[1]  Cat. no. 15. The leaf that probably faced the miniature is now in Munich in the Staatlichen Graphischen Sammlung (no. 40097) is reproduced in the exhibition catalogue, which is available to download from The Met's website.