The initial above sold at an auction in Barcelona last week. It is appealing, but I do not really know what to make of it.

It was catalogued as "Spanish school", but neither the style of the illumination nor the script on the back look particularly Spanish to me: 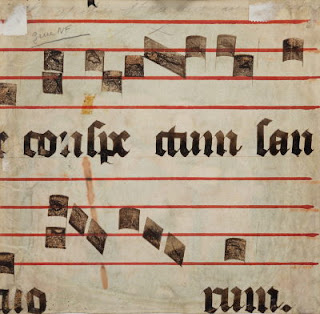 On the other hand, it turned up in Spain, and it is notable that while the initial apparently introduces the Common for an Apostle:

the saint in pride of place, in the centre between Sts Peter and Paul, is St James, patron of Spain: 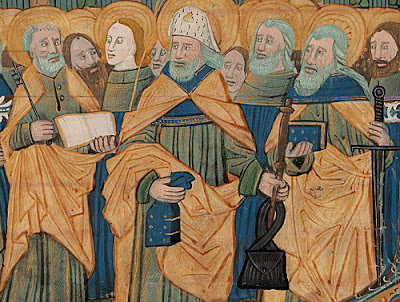 (He is recognisable by the scallop shell -- a "coquille St Jacques", named after him -- pinned to his hat, and he carries the staff and satchel of a pilgrim).
Based on the style of script and illumination I would probably have guessed that it is French (Rouen?), of c.1500 or early 16th century. I might certainly be wrong about the nationality, though: there is something weird about the form of the letter itself, with the way that the blue shades into white against brown; it is as if a Spanish(?) artist has tried to copy, but misunderstood, the form of French 'puzzle' initials:

My estimated dating is apparently right, however, because (not noticed by the cataloguer) the initial is dated along the top edge, 4 March 1505 (in 1505, 4 March was the Tuesday in the 4th week of Lent). I don't think I've seen a historiated initial dated in this way before:
Posted by Peter Kidd at 08:22